Home Mailbox Mails: Neymar would be at Everton if he wasn’t Brazilian… 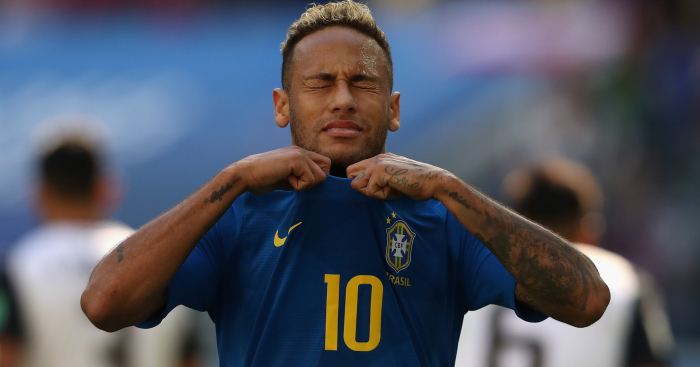 The Canadian Neymar
If Neymar was Canadian he would have cost £35m and be playing for Everton.

There, I’ve said it.
AMK (Gooner gone all sensible)

Lay off Leo
With the exception of Maradona, has ANY player “dragged” his team to the World Cup? Not Zidane in ’98, who was suspended for two games and drifted in and out of the competition. That victory was all about France’s magnificent defence (how good was Thuram during that competition?). Not Ronaldo in ’02 or Pele in ’70, both of whom were leading men in all-star casts. It seems to me (Clive) that most World Cup winning teams are either a collection of all-time great players (Pele’s Brazil teams, Beckenbauer’s Germany, Lahm’s Germany), or a mixture of great players, combined with well-organised solid pros and a key focal point in attack (Romario’s Brazil, Rossi’s Italy, Kempes’s Argentina). So lay off Messi, eh? Asking him to single-handedly take his country to the World Cup is asking him to do something that arguably only one person has ever done before.
Matthew, Belfast

Hands across Russia
I’m sitting here on a Friday night, after one too many beers and I’m feeling very philosophical. Before this World Cup kicked off, there were a huge number of question marks over Russia hosting this wonderful tournament. Let’s not beat around the bush, the Russians are dodgy as f**k.

Russia is not high on anyone’s list as a tourist destination, they don’t come across as a particularly welcoming people and they don’t seem to like anyone other than themeselves.

Then I started to think, what if Russia needed this World Cup, what if they needed this influx of different societies, cultures and colours?

When you are so closed off to the World and all you have is the propaganda being spouted by your government, maybe all you need is the chance to see what the reality actually is. Beautiful people from all over the world coming together to celebrate a sport we all dearly love.

It’s often said we all fear what we don’t understand. Maybe, even if only in a small way, this World Cup might open the minds of the Russian people to the rest of the world. We aren’t all against you, while different we are all just humans trying to live the best life possible.

Gay, straight, black, blue or orange. We are all people, we are all football fans and there is no reason we all shouldn’t get along just fine.

Right I’m off to bed. I’ve made a show of myself

Lucky that, otherwise my efforts to disguise all muscle with fat would’ve been a complete waste of time.
Aidan, Lfc (going to steer clear of Portugal games in case Ronaldo scores)

Some thoughts
*I didn’t see Brazil in the qualifiers, so I don’t know exactly what system they used, but I’m wondering why they have Philippe Coutinho picking up the ball so deep. He drives forward well, but it’s no surprise that the team’s two most important goals have come with him close to or in the penalty area.

*Don’t know how many people saw Nigeria-Iceland, but Kenneth Omeruo, one of Chelsea’s perpetual loanees, was brilliant. On the left side of a back three, he did everything right on the ground and in the air. He’s still only 24, so fish or cut bait, people.

*This isn’t the first time Serbia have been shafted by WC officials. They were knocked out in 2010 when the ref bottled a clear penalty against Australia in the dying moments of the final group game. I can’t possibly imagine what the VAR officials thought they saw when Mitrovic was tag-teamed last night. (But Xherdan Shaqiri has been one of the best players of the tournament.)

*My final word on VAR. If done efficiently, and eventually most of the time it will be, it produces small stoppages at crucial moments of the game. Whether you like that depends on where you sit. Either way, as has been made clear at the tournament, it’s an extra pair of eyes, and that’s all. It won’t eliminate egregious errors. It will likely make them less frequent, however.
Peter G, Pennsylvania, USA (Nigerian fans are great)

Marvellous Musa
Now that Mohammed Musa goal was something, it is the goal of the tournament so far. I was interesting that there was no mention of it in most of the major papers today. I can assure you if one of Kane, Ronaldo or Messi had scored it the daily mail would have had more than five articles dedicated on it and declared it a world class strike, what ever that means!
Carlton LFC Australia

Seems to me that amount to pretty much the same thing…

Anyone have any thoughts on that?
Artie from Kentucky

Another consequence of VAR
I’ve always been interested in the psychology of a game of football and how both teams and individuals react to different moments.

As the end of 90 minutes approaches the winning team generally sits back to protect the lead, the losing team is usually throwing the kitchen sink at then to get an equaliser.

So, long injury time is good for the losing team.

Now add the impact of VaR, injury times are getting longer and longer now (8 minutes is now not unusual).

Probably a good thing for the game until Germany score two injury time goals against us because we wanted a penalty for a dodgy trip reviewed earlier.
Mark W (loving how people thought VAR would ruin football by getting rid of the subjectivity)

A goal for all of Abuja
Great win for us. Not so good first half, a brilliant second half (kind of like the friendly against England, only this time we won). We still have to work on a few things though, like having better first halves and stop playing Mikel as a 10. Geez, everyone can see its not working (except the coach obviously), even his teammates seem to avoid giving him the ball much, if he has to play then he should play as a 6, which is what he plays for his clubs too, he is no longer the skillful attacking midfielder we once knew (Thanks Mourinho). Then there was VAR trying to do us over, but thankfully Sigdursson seemed to have learnt something from Messi.
Football can be so unpredictable. We lost 2-0 against Croatia but Argentina went and outdid us losing 3-0, got me thinking ‘we weren’t so bad’, and then we went and beat Iceland who Argentina couldn’t beat (or England for that matter). But that brings me to my biggest gripe, THE HEADLINES. All the headlines I have been seeing from the match, including F365’s is something like ‘Musa magic gives Messi and Argentina hope’. What nonsense, I was actually thinking that Ahmed Musa scored those goals for Nigeria, you know, the country he plays for, but no he was actually just scoring just to help Messi. My point is, Nigeria just won a game to boost their chances of qualifying from their group against a team that is notoriously hard to beat but they don’t even get credited with the headlines, it has to be about Argentina. Good job everyone.
Emmanuel, MUFC, Nigeria ( I can’t wait for us to knock Argentina out, then maybe the headlines will be about us)