Home Mailbox Mails on Delph, Stones and other England scapegoats… 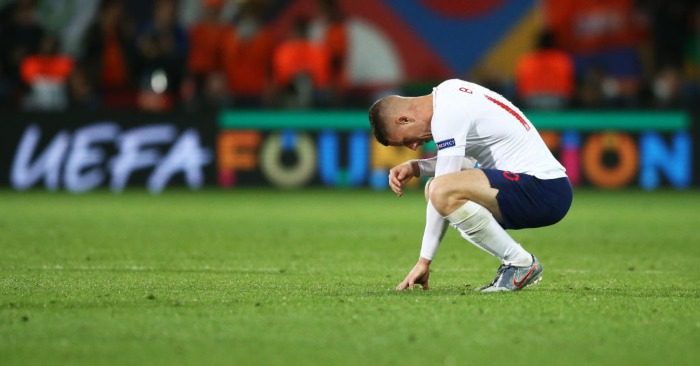 Thanks for all your England mails. Keep them coming. Mail us at theeditor@football365.com

A load of England conclusions
More something that’s done for club games between the top six but I think tonight’s game raised enough to warrant the same treatment. Was aiming for 16 but didn’t want to bore people any more than necessary.

* Not as disappointing as last year’s semi-final defeat obviously but cut from the same cloth. A stage we’d done well to reach and against opponents who were decent but as generous as you could hope for at the last four stage. Took a 1-0 lead, could have been more then contrived to throw it away. The chickens of not having a midfield with enough guile to keep hold of the ball and gain a foothold in the game came home to roost again.

* Very keen on us playing out from the back but there is a time and a place lads. The very obvious key is only do it when you have a bit of time and space and only play it to a teammate who also has the time and space to receive it (see England’s disallowed goal). If either of these doesn’t apply, do not do it (see Holland’s second and third goals). It’s really, really is simple.

* Which brings me on to John Stones – who was responsible for all three goals. The first for losing his man was forgivable, not great but it happens in a split second to even the best now and then. The second needs no explanation, for the third Ross Barkley didn’t cover himself in glory but was put under all sorts of pressure with his back to goal by Stones’s ridiculous pass.

* Impressed by Sancho, he’s young and new to the team so will take time to reach his full potential. But I like the balance he has between always looking to do something constructive and not trying to be too Hollywood. Possibly the future of the England team.

* More demanding game but a bit of a regression to the wasteful mean from Sterling. Not terrible and improved as the game went on but the drop-off is noticeable compared to when he plays with brilliant City players who give him a lot of good ball in a lot of good areas. There’s a decrease in effectiveness when he has to do more than apply a straightforward finish/ lay off a simple assist/ beat a man by momentum. Goes against the grain to say in these parts, I know.

* Good cameo from Henderson, has his limitations but when he sticks to them – which he increasingly does – pretty effective. Can’t believe there was ever a debate about whether he or Dier was better.

* Poor a season as he has had, did we miss Trippier? It’s a strange beast international football, there is a lack of time to mould 11 individuals into a proper team so it’s a bit more sink or swim by your own ability. This lends itself to world class players or, failing that, those that have pronounced strengths (even if they also have weaknesses). You need transferable skills like Trippier’s delivery. Daft as it sounds, Andros Townsend is another that falls into this category. It’s been a while but always has an impact when play for England. Would always select him in a squad as a wild card.

* It’s hard to know if we took this seriously. The playing out from the back was, at times, what you would expect from a training game and a number of key players who had been in the Champions League final were rested – at least initially. Overall, some promise but plenty of familiar failings.
Ronnie Buzzard, (even as a United fan Liverpool were not lucky) Manchester

England questions that need an answer
Kindly explain to me the following:

Why did Southgate decided to rest the seven players that took part in the Champions League final while the Netherlands played all their players?

How can Chilwell lose possession as a defender 29 times….29!!!

Stick or twist England…
As an Englishman living in Holland, that was all a bit painful, especially now that the Dutch are pretending that they played really well and the Nations League is very important indeed. You rightly slag off the English defence (Guardiola doesn’t get many things wrong, hence Stones absence in a light blue shirt this past season), but what about Dumfries and Depay on the other side? Dumfries was awful, but Depay was laughable. Poor lad.

My main point though, is that England need to decide what they want to do when Pickford has the ball. Pickford obviously just wants to boot the ball as far as possible upfield. Southgate wants to play cultured football from the back and the rest don’t know whether to stick or twist. I’ve played football in Holland since I was 7 (back in the 70s). I’ve never known any differently than that the keeper passes it to a defender.

Watching Pickford, it seems that playing out from the back is unnatural. This uncertainty seems to affect the other players, and right from the start yesterday evening, I was waiting for it to go wrong (not that Pickford was to blame for any of the goals). One of my Dutch mates actually sent a message saying ‘it’s quite cute watching the English think they are capable of playing out from the back’. A cutting reply was not forthcoming.

So, Southgate, sort this out. Decide whether or not you have the players to play ‘the foreign way’. If not, accept that fact and think of a Plan B, otherwise you haven’t a cat in hell’s chance of being successful.

Oh yeah, my son used to play in the same team as Frenkie de Jong. He used to be tiny, but always was better than the rest (Frenkie, not my son, unfortunately).
G Thomas, Holland

That midfield would be relegated
I am bereft. I thought we had turned a corner and become okay. But no we are still sh*t.

Midfield without ideas, forwards starved of anything useful and a defence that is a leaky as a Welsh sieve.

Pep knows Stones is not good enough and Delph isn’t good enough in midfield. Barkley has done nothing unless he is a sub. The midfield in the Premier League would be relegated.

Dier, Henderson and Alli would had at least run around a lot and tried some incisive passes rather than the five-yard sideways or backwards we were subjected to.

Kane came on and continued his Champions League final form, Lingard at least looked lively but!
Bill the Bury fan

I fear we are becoming rule chasers, forgetting the game we used to love. Really, did the ‘handball’ that gave Liverpool the Champions League deserve to be punished with a goal? It was a maybe cross that touched his arm. Give them a free kick if you have to give something.
And then, Lingard’s boot was a centimetre ahead of the Dutch back line. Gaining an advantage? Was he ahead of the defence? A few years ago, to get a bit of the spirit of the game back, they talked about daylight between the attacker and the defenders. Where was the spirit in calling tonight’s ‘goal’ offside?

All for VAR and getting decisions right, but we should beware of letting the rules overtake the game.
Mark Pilling

…I don’t like VAR. As a supporter, I’ve been on both ends of VAR and I’ve not ever gleaned any joy from it. The up you get from it always feels slightly contrived and the down is crushing, especially when the call is so tight.

My main gripe with the system is the time it takes and how disjointed it makes the game feel. The commentators in the England game last night likened the tension to watching an episode of Deal or No Deal. I’ve always found the tension of football exhilarating and never thought of it as in need of inspiration from a cancelled day time TV show. They were talking up the tension that was being built whilst no one was kicking a football.

I watched a game in Germany recently which was dominated by VAR and it was a pantomime. A penalty was awarded whilst the opposing team was on the attack. No one in the stadium knew what was happening. It just didn’t feel like football as I know and love it.

The system will undoubtedly improve and become more time efficient, but as it stands, I’d be more than happy to see it outlawed.
Will, London

…I’m sure you’ll have plenty of mails from people disputing the VAR decisions tonight and correctly so.

However, my argument is the amount of stoppage time the system will introduce. Games will just drag on!
Chris, Croydon

…Well a controversial VAR call rules out Jesse Lingard’s potential winning goal and then Netherlands go on to win 3-1.

Was he offside? VAR said yes, the (potentially bias) pundits say no, I have a feeling this could become a strong theme throughout the next Premier League season, and some were worried VAR would kill off the chat down the pub about controversial decisions, we could be in for many more next season.
Mikey, CFC (Ronaldo v Netherlands in the final, I’m backing De Ligt’s side!)