Home Mailbox Mails: Only one man can save England now… 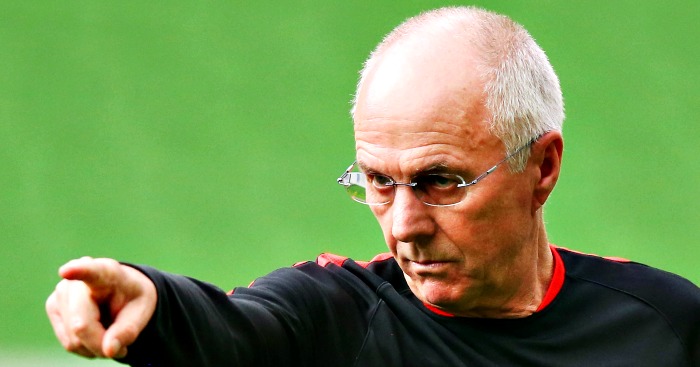 But first, I remember one of my friends asking me who I wanted as England manager after Hoddle and then Keegan had their turns in the hot seat with limited success. My response was, “Someone old” although I did elaborate further on the need for an experienced manager, preferably with international team experience and/or experience in managing in leagues outside of England. We then got Sven who I was very happy with and he did do well compared to other managers. In fact, the most successful (or least sh*t?) England managers I’ve grown up with from Sir Bobby onwards have all been the older more experienced managers (and just to clarify in case anyone wonders, I am not in fact a rocket scientist).

Managing England is a prestigious job apparently. As is managing one of the top premiership sides. So why is it that top premiership sides easily manage to pull the biggest managers in the world yet England does not? England is not such a prestigious job and the poison chalice it has become makes it even less desirable to most. But still, there are many experienced managers out there who would be much better than punting the next up and coming manager from the lower leagues who managed to get a side into the premier league on a tight budget. Well done, but that does not qualify you to manage an England side with all it’s inherent problems and if you have any sense you’ll stay away.

My second point on England managers compared to club managers is the loyalty of ‘fans’. Club supporters tend to be very loyal to their new managers and give them the chance they deserve. Just look at Utd as an example, Moyes was given a fair crack and then LVG and now Mourinho who many of us hated prior to his appointment but is now given a fair crack and rightly so. But with an England manager, they start the job with at least half the country and half the journalists wanting them to fail. What if the country just got behind the next manager and let him do whatever he felt was right. Maybe there would be less pressure all round and the football team could concentrate on trying to play football rather than worry about who the press are going to crucify next.

Bring back Sven
Forget Pardiola, Bruce, Howe etc. I like the idea of LvG and he’s got the track record… but he didn’t drop Rooney last year so no.

The answer is clear to me: Bring back Sven. He speaks the language, has worked with top players, got England to three successive quarter finals (oh those golden days), has worked in the Prem and abroad and most importantly, has already been implicated in every form of embarassing scam and controversy known to man – so there’s nothing a tabloid (or broadsheet behaving like a tabloid) could reveal about him that would make anyone bat an eyelid. It’d all be old news.

Furthermore, as a fairly laid-back guy, he’s probably hit that stage in life where he’s not bothered about specific tactics, man-marking, ketchup, obsessive videos of each player’s role and opposite number etc and as a result it would probably be quite fun for the players – which in theory results in better performances…

All the FA have to do is match his Chinese wages… It’s perfect!
Alex (I’m only half joking), Leeds

WWEngland
Bit late to the party on this but have to say I agree with the whole picking the England manager with a TV vote thing though I think we should go further and go all WWF about it.

Everything about the England team is a circus so why not embrace it?

With England managers going through managers quicker than Raw gets through general managers – look it up – Mick Foley has lasted longer than Fat Sam – how about all of the England manager’s business is conducted through a weekly show?

The new manager could summon players to his house and tell the likes of Terry and Ferdinand that they are going to be central defensive partners despite their seeming hatred for one another.

England squads could be picked in the style of a Royal Rumble where each player has their own theme music and the squad of 24 is announced one by one on screen rather this press release nonsense we currently have – I means where’s the razzmatazz?

Managers of upcoming opponents could be summoned onto the show so the England manager can tell them how they are going to kick their ass so we can get some lovely heat around the upcoming game.

PS Please don’t give Walcott any praise until he’s managed 30 goals in a season we’ve won the Champions League. He’s only a game away from doing a much of selfies.
Graham Simons, (Oh Yeaahhh!!!! Diggit!!!), Gooner, Norf London

Calm down
Can we all calm down a bit about Janssen please? He’s a 21 year old in a completely new environment, and the man with whom he is being unfavourably compared was generally disappointing in most of the games he played in his first season, and close to being written off. A little consistency, please.

Onto the Soldado comparison: the issue with Soldado wasn’t generally his finishing (towards the end it was), it was that he couldn’t get himself into effective positions. Soldado was the kind of player who needed the team in a certain shape for him to excel, and certainly not a natural back-to-goal striker. Janssen’s issue is currently ropey finishing, which is far more simple to sharpen up. His goal threat isn’t there, but he occupies defenders with his movement and work rate – entirely feasible Son wouldn’t have had the space he got if the centre-back hadn’t been knackered from battling a lump all game (to use the technical term).

For some reason, everyone is so quick to give an ultimate assessment of players within weeks of them joining their clubs, completely ignoring the myriad examples of players who take at least a whole season to adapt and become effective. He’s learning a new and incredibly complex style of play, in new surroundings, with new teammates and a completely new culture. The impatience is ridiculous; particularly as there is not a single player in our squad right now who hasn’t been improved immeasurably by Pochettino. I’d far rather concentrate on a fantastic away win in difficult circumstances, and a very promising team with pretty much the whole squad contributing.
Alex G, THFC

Played, Celtic
Well that was an exciting game of football wasn’t it?

The Champions of Scotland against the current best team in England.  A team which up until last night had won all ten of their opening fixtures. A team which cost £420m to assemble and you know what, we went toe to toe with them and for the bulk of the game we held our own. Yes we tired in the last 20 minutes, ceded possession and had to hold on a bit desperately but we did.

The game had the lot, attacking football, skill, flair, passion, mistakes, lots of goals and an atmosphere like no other. Well almost the lot, it lacked bad tackles, viciousness, and cards. I reckon UEFA will be mighty pleased with the football advert their premier competition offered last night. It was one of those “I was there” moments and I was there.

However just to put things into perspective our entire team cost £20m or two fifths a John Stones in today’s money. Our most expensive signing Scott Sinclair was one of the worst players in the worst team in the Premier League last season. With the new dawn of Premier League money we will never again be able to compete financially with any of the clubs but that is the way football is now, so be it.

What we offer is passion and determination in bucket loads added to little bit of skill and guile – which by the sounds of it, surprised quite a few of the more southerly based experts.

The players, coaches, and fans to a man (and woman) played their part in creating a special night I am very glad to say I was part of. The atmosphere that we create is on par with pretty much anything around the globe and last night once again acted like a 12th man as early on City struggled to deal with it.

We went up against the very best this country has to offer and we held our own. How many teams do you think will be able to say that this season?
Chris M (Somewhere grim north of England pub league land)

I could’ve done more than seven actually – Just think about a part of the body Gary Cahill can legally use in football and it’ll be out of form.
Kev (banging the Cahill’s not good enough drum for about 2 years) Essex

I didn’t see it
I was quote saddened last night watching the panel on Sky last night talk about Allerdyce when not one of them condemned him and all said it would be good to see him back, Even Niall Quinn said it was sad as it brought to the forefront the dark side of the game!

Is this not a good thing that all this needs to be exposed but perhaps this approach is not surprising when week in week out we see players falling out of nightclubs with some fame hungry future wag or fighting, Take Andy Carroll this week and his “Too poor to buy a phone” lark, When a player does something we get the “Internal mater” story and every horror tackle is meet with “I didn’t see it” but lets pick on the ref.

Sam is being made to look like a victim from ex pro’s and its very disheartening as a fan.

If all things are covered up just because someone has made it into the elite club of footballer then what hope do we have of ever getting honesty in the future when we are breeding even worse pfms for the future?

Wenger In
I’m just going over my diary for the next week and, although I have today as a ‘Wenger In’ day, I haven’t got details of the next ‘Wenger Out’ day. I’m sure it was penciled it in for next Sunday but I’m not too sure now. Can somebody let me know, please.

Many thanks,
Andy Race

Scandals and gossip
It’s funny isn’t it, how little transfer gossip is apparent in the papers during a week when widespread scandal allegations in British football are rife.

It makes you think that they usually just make some guff up in a search to find just anything to prin……… ohhhhhhhh I get it now.
Al Williams