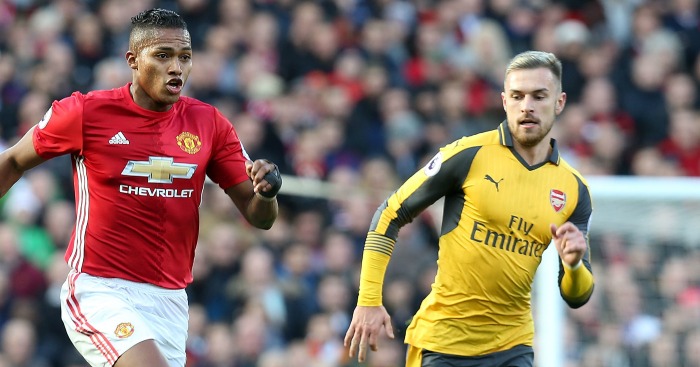 We’ll have plenty more weekend thoughts on Monday morning. Send your mails in to theeditor@football365.com…

Sent before the equaliser
Arsenal should just forfeit any games against Manchester United at Old Trafford and/or Jose Mourinho.

Seriously no point in playing those games anymore.
Malcolm, AFC

Mourinho is a joke, says United fan
Jose Mourinho is an absolute joke of a manager, I have no idea how he’s managed to win the things he has done but I’ve seen nothing since he joined United to make me think he knows anything about putting together a team.

He couldn’t beat Arsenal after they put in one of the worst displays I’ve seen from them since we beat them 6-1 at Old Trafford.

He doesn’t seem to have any plan on how his team should play, on how to motivate players to play to their potential or any idea of how to handle the press.

The worst thing about not winning this game will be the amount of crap he comes out with after the game to show it isn’t his fault.

I’d say sack him but there is nobody available to take the job who would really be any better because the club is ran by clowns.

Here’s to a miserable 20 years ahead, I’m sorry Liverpool fans for ever laughing at you but as they say he who laughs last laughs loudest.
Leon

A point or not, Arsenal were dire
– That was awful. We came into the match with no plan and got dominated by a poor United team for 85 minutes of the match. We’ve been awful in too many games this season and it’s a wonder how we’ve managed to go so long unbeaten. We’ve played well in about 5 matches all season, two of which were in the champions league. Excellent finishing from the likes of Walcott and Alexis have dragged us to fluke wins and draws, they’re not gonna keep it up all season and when they inevitable have a blip in form we are done for.

– It was as clear as day to anyone watching the game that we needed a change early in the second half but in true Wenger form he waited until United scored to make a change. The changes themselves were good but he waited far too long to make them.

– Herrera is a cheat, fouls people non stop and then dives whenever anyone even grazes him. Baffled why people rate him and baffled why he was getting praise today. Pogba on the other hand was very good and very dominant, and managed to do this without being a diving cheat. I haven’t watched all of United’s games but it’s the best I’ve seen him play for them yet.

– Ozil, Alexis and Walcott looked very sharp for the first half an hour and then all proceeded to disappear. Credit to Ozil, he still tried to get on the ball in the second half but when he did he was almost always surrounded by 3 or 4 United players and lost the ball.

– Not starting Xhaka was a ludicrous decision. He was good vs Ludogrets and then was easily our best player against Spurs. Playing Elneny ahead of him made little sense unless we were going to play on the counter, yet we had 55% possession. Surely if we’re going to control the game it makes sense to play the only fit deep lying playmaker we have? A guy who knows how to control the game and can also play balls between the lines. Elneny is perfect at doing the simple things, but he is incapable of doing anything else. He would be great if we were playing on the counter but in a team that controls possession he offers nothing but 5 yard sideways passes.

– Monreal is past it. He’s been really bad this season and the Spurs game was probably the first game all season he hasn’t been skinned by the opposition winger. I think it was a penalty for his foul on Valencia as although the contact was very minimal, it was still contact and probably knocked Valencia off balance. His static defending for the goal was embarrassing and I would be shocked if Gibbs wasn’t our first choice left back by Christmas time. If Luke Shaw is indeed on Mourinho’s sh*t list, why not put in a cheeky bid for him?
Matt, Arsenal fan

Wenger’s shoehorning of Ramsey is infuriating
Ten minutes to go. As I predicted earlier this week in response to Frankie, Ramsey is shoehorned into the side and plays abjectly. Team is unbalanced and Monreal’s normal attacking threat neutralized. Ozil unable to make his usual runs because Ramsey takes his space, vacates his and exposes Monreal time and time again, which finally leads to the first goal.

Is it Ramsey’s fault? No – it’s not his fault he’s no more than average; it is dinosaur Wenger’s fault for picking him over Iwobi, Xhaka, Giroud, Ox, etc., etc. Same of Arsenal, same old Wenger. Totally fed up.

…Just the one conclusion from the Man Utd vs Arsenal match from myself.

Aaron “the myth” Ramsey plays and Arsenal are extremely poor. This is not a coincidence. And I fully expect to hear the following comments:
“he was out of position”
“his talents are not being managed” “the team should be built around him”
“He can be world class elsewhere”

However please save yourself the time of ranting about the overrated Welshman and read the following statistic which I found from a fellow gooner (Football 365 can hopefully back me up on this). Since August 2014 until now here is Arsenals win percentages with and without Wenger’s prodigal son.

We do not need to get The Myth Busters in for this one.
Frankie AFC

Not all bad for Arsenal
Despite the fact we played poorly against Man Utd, that is a game we would lose in past seasons. It feels like a massive result, despite the performance.

It’s a results game. Very few teams in Europe can match or better our results this season…

It’s also worth noting we have played Liverpool, Chelsea and Sp*rs at home, as well as PSG, Man Utd and last season’s champions away.

If we repeat this form over the next 18 games, we’ll be in a strong position.
Naz, Gooner

Where has all the diving come from?
It’s f**king everywhere. I don’t remember the last time I saw a penalty where the attacker wasn’t looking for it. I think the problem is not the reffs, their hands are tied because there was some contact. The only time they can wave it off is if it was blatantly obvious the attacker was looking for a penalty instead of you know, playing football. Vardy style.

I think the problem is that it’s simply coached that way. Most players wouldn’t dive, or at least not as much, if they weren’t coached that way, and then maybe even expected to by their managers.

I might be wrong but it’s killing me every time I see it, but not because the players do it, but because it’s all the f**king time and to top it off it is accepted by pundits and idiots alike.
Zdravko

The joy of joy
I have absolutely no affiliation to Spurs whatsoever but I couldn’t help but love Harry Winks’ celebration after scoring on his debut against West Ham on Saturday evening. Scores the simplest of tap-ins from, what, two yards, then wheels away with a look of sheer ecstasy as though he’s just got the winner in the Champions League final. You could say he went the full Pippo Inzaghi. Brilliant to see.

On that subject, any thoughts on favourite celebrations? Could be a triple back flip that went wrong (come on, we’d all love to see that) or maybe just going completely crazy a la Temuri Ketsbaia.
Andrew Chapman (watching MOTD on repeat in my pants)

Respect to Pep over Yaya
My respect for Pep Guardiola has increased after this weekend. And I’m a United fan. Why you may ask? Because of his treatment of Yaya Toure. Yaya apologized, was brought back into the team, scored two goals, won three points for his manager and made a huge point.

Compare that our manager, Mr. Mourinho and his shabby treatment of Mkhitaryan and Schweinsteiger. Both class players reduced to the fringes, without any concrete reason. Mou should learn from Pep and be more classy and not publicly chastise his players like he did with Smalling and Shaw. Sigh, what could have been.

By the way this is no #MouOut mail he needs time, I was in favor of LVG getting more time too.
Sikander Sawhney (regular reader of the mailbox first time writer) MUFC, India

It’s a fair shout
I think Virgil Van Dijk is the best centre half in the league.