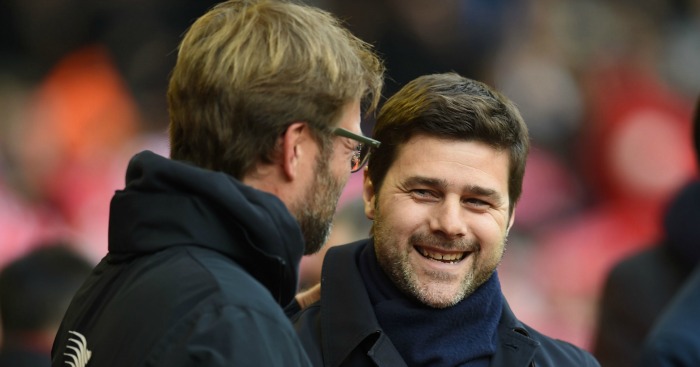 If you have anything to say on any subject, mail us at theeditor@football365.com. Read Mr Terry Hall, Switzerland on Exeter’s long-serving, hat-wearing manager Paul Tisdale.

Pochettino > Klopp
Brian (Yup, much rather have Pochettino then Klopp *laughing with tears emoji face) LFC

See – this is why people can’t stand Liverpool fans. Somehow you manage to equate a full strength Liverpool getting a 1-1 draw away to Dortmund with Klopp being better than Poch. Never mind Spurs played second string sides in both legs as we are going for the title, you managed to somehow end up thinking about Spurs still. It must gall you that six of the last seven seasons we have finished above you, that we have a young exciting team and are currently better than you. It is kind of funny reading you have a dig at spurs though – shows how far you have fallen and how much we have risen

Klopp is too good for fans like you.
Richard THFC Eire (In exile in Hull)

Can to become a Liverpool star
Funny how football fans can have such contrasting views of the same game. Adam, LFC, thought that Can was a bit of a liability yesterday – I thought he was absolutely immense. One little shuffle of the feet to take out two Dortmund players in the second half had me groaning with pleasure. He was my MOTM in a game featuring several notable individual performances.

I agree he’s not yet the finished article, but with age on his side he has plenty of time to go on to become a really influential player in this Liverpool team.
Jamie Bedwell, Cheltenhamshire

Alan Pardew has played down the importance of Crystal Palace’s game against Norwich City, as he is bound to do through his mix of attempting to keep the pressure off his players, and his naïve complacency towards the seriousness of his team’s plight.  For both teams involved, it is the biggest game of the season.  A win for either side is a huge step towards safety whilst also worsening the situation for their nearest rivals.

As much as I obviously want the Canaries to lose, they’re not a team that’s easy to hate, unless you support Ipswich Town.  Also, every goal Dieumerci Mbokani scores from here on in is two fingers up to that c**t at the DR Congo FA.

This could be a spectacular game, or the worst game of the season between two incredibly cagey sides.  No pressure lads.
The literary Ed Quoththeraven

I am also a bit OCD about numbers in football – number 3 (a great number, the number of my uncle, the legendary Roberto Carlos) should always be left back, the number 2 (rubbish number, Gary Neville) should always be right back. However, there are a few exceptions when legendary players make an odd number their own – like Keane number 16 (16 for me now will always be the number of a driving midfieder), Mihaijlovic and number 11 (a left back/ center back who scored as many free kicks as Andrea Pirlo).

So, here is my favorite numbers XI (no numbers can be repeated):

Sticking up for the number 9s
The Premier League’s nine worst No. 9s

Long time reader, first time contributor.
Read through Ben from Cheltenhamshire’s list of terrible no.9’s and was aghast at the idea of Grant Holt being in that list.
Whilst he may have looked like a sack of potatoes squished into a Norwich shirt, he had a fairly decent first season in the Premier league scoring 17 goals in 38 appearances. Even though I’m (thankfully) not originally from Norwich, I did however establish myself there and he quickly became a cult hero!
Rob (MUFC fan with soft spot for the Canaries)

…Grant Holt in a list of ‘worst number 9’s’ for Norwich City?

…Ben (This took too long), Cheltenhamshire, we (Man City) have had some truly terrible players in my lifetime, mindboggling awful signings and genuinely embarrassing players. So why did you pick out Mpenza and Bojinov? We signed Mpenza, he scored some very important goals to save us from relegation, didn’t stay for long, but for that year at least was our hero. As for Bojinov, he was a player of genuine quality and promise. He was also a player of genuine glass knees and only managed 12 appearances.
Try harder next time.
Nelson, Manchester

Best nearly signed XI
First time writer – hi. Liked the bit from Horse about ‘best sold XI’ and that got me to thinking about where Arsenal would/could be if all the players that King Wenger ‘nearly signed’ had actually been signed. As you can see from below, we’d have scored a f**k load of goals but would have had ego’s coming out of every orifice….

GK – Buffon/Cech: Buffon could have allegedly happened some years ago. So could have Cech. Obviously Cech did eventually but not as good now as he was then…

DC – Kompany: Wenger chose Djourou over Kompany. Nice judgement. Djourou should never be in the same defensive company as Kompany

DC – Pique: similar to Djourou/Kompany, except remove names and insert Senderos/Pique. Does the King have shares in Swiss army knives/clocks/chocolate/CERN/defensive strategy?

DC – Makelele: ok, so I’m shoe-horning him here but you know he could have done it. This would then have been the ‘Makelele role’. Came close to joining with Vieira. That would have been a bit wow.

MC – Yaya Toure: he actually played for Arsenal in a friendly, 13 years ago. Couldn’t get a work permit. So? He will get one. Get a first refusal clause in there somewhere!

MC – Essien: I just loved this guy. What a f**king testosterone-inducing solid as granite mofo this man played like. Tore up Marseille. Went to Chelsea. Meh. Next…

MC – Barton (Alonso): went for Barton for sh**s and giggles. But could probably have done half a job. Alonso? Beautiful player, beautiful man. Would take the metronome now.

RF – Ronaldo: £4m! The streaky haired show-pony could have cost that little. But the King was bullied and out maneuvered. Again. Repetitive nausea coming on writing this…

LF – Messi: A tops £250k flat for him and his family would have secured the best player the world has ever seen. Nausea just turned into actual vomit. Excuse me…

CF – Drogba: If getting Messi would have cost a whopping £250k, Drogba would have cost a ball-busting £100k. He was watched carefully, allegedly. Bet you didn’t fathom he’d annihilate every Arsenal side he came up against for Chelsea.

CF – Ibrahimovic: to be fair, the worst ego of the lot was already in place at 16 when he was invited for a trial. Did Bendtner have a trial? Didn’t think so. End of.

I started this post quite happy. It’s Friday after all. I’ve just made myself feel pig sick. Missing out on one? Acceptable. Two? Getting a bit cheeky. Three? Not coinkidoink (coincidence). Eleven +????? The King should be made to sit his 11+ as part of a humiliation package.

Regards
Andy (weirdly the most disappointing one is Essien for me. Just think he would have been the absolute mutts nuts in the red’n’white…)

Gareth Barry for the Ballon d’Or
Martinez has previously told us Gareth Barry is one of the greatest English players of all time. And now he has told us that Gareth Barry is having his most consistent season of his career. So to my mind that means he must be World Player of the year and shoe-in for the England team for the Euros right ?
Steve James

Leeds United sold XI
This seems like a fun game, doesn’t it? I thought I’d have a crack at this considering it’s been long enough since our downfall for most of our former PL squad to be retired (Ferdinand, Kewell, Fowler, Bakke, who I had an incredible fondness for), but we’ve still produced some quality players in the last few years. Playing a rather defensive but energetic 4-2-3-1, here’s what I managed to cobble together:
GK: K Schmeichel – On course to emulate his Dad and win a title, he’s been brilliant. We only had him for a year but he really was (and is) superb.

RB: S Byram – A recent sale (and injured at the moment) but this kid really is the business. Gutted we lost him but he’s a mirror image of the man on the other side of my back four…

LB: D Rose – England’s best left-back for my money (though Shaw will be better when he’s fit and firing). Like Sam Byram he’s a bit defensively suspect, which doesn’t bode well when you consider who I’ve got at centre half.

CB: D O’Dea – Bit of a cheat, this, seeing as he was on loan from Celtic and sold by them when his loan expired with us, but there was no-one – absolutely no-one – else. Please let me bend the rules guys. Don’t make me put a 40-year-old Michael Duberry here.

CM: J Howson – A solid performer in a Norwich midfield that looks like it might squeak survival. A hard worker, which is exactly what’s required in front of my centre-half pairing. Plus he’s local.

CM: J Milner – Boring James Milner will finally be the main man. This side will make him look like Yaya Toure, Andres Iniesta and Andrea Pirlo rolled into one. Adds vital quality.

RW: A Lennon – Keeping up the energetic-but-not-quite-good-enough theme of the side. Wouldn’t turn him down though, and he can still look dangerous at times. I’m imagining him replicating the double wing menace he enjoyed with Gareth Bale with the maverick of my team…

LW: M Gradel – Despite the fact he got a red card against Bristol Rovers in the game that got us promoted from League 1 (and caused plenty of nail-biting for me and my Dad) he’s just a class above any other options. I genuinely believe he’s a great player and I can’t wait to see him do well at Bournemouth next season. He’s already looked dangerous.

CAM: F Delph – He was worth £6m when we sold him in 2012 and he was worth £8m at the start of this season. Says a lot about his progress but I’d rather him than shoehorning in Adam Clayton or Bradley Johnson somewhere.

ST: R Keane – A tough call here – none of my options are good enough really – but Keane just edges it on quality. He wouldn’t play week in week out, and probably wouldn’t ever complete the 90 minutes, but Ireland’s all-time top scorer is in.

Not an awful first XI in all honesty. A couple of genuinely good players there, a couple of hard workers and a pair of absolutely dog-sh*t centre-backs. The bench doesn’t set many hearts a-fluttering but Beckford has the pace to change a game if he comes on late for Keane. I’m not sure if this side could stay up but it could certainly compete in the Premier League. There’s no obvious goalscorer in the side but hopefully a quality midfield and a good goalkeeper would go some way to bailing out a truly anxiety-inducing defence.

The one thing that really shocked me was the absolute dearth of quality Leeds have had at CB for nigh on a decade now. If the ones we sold were bad, I can assure you the ones we kept weren’t much better.

I’ve wasted my time and I hope I’ve wasted yours too.
Joe, LUFC, Telford (If only, if only)