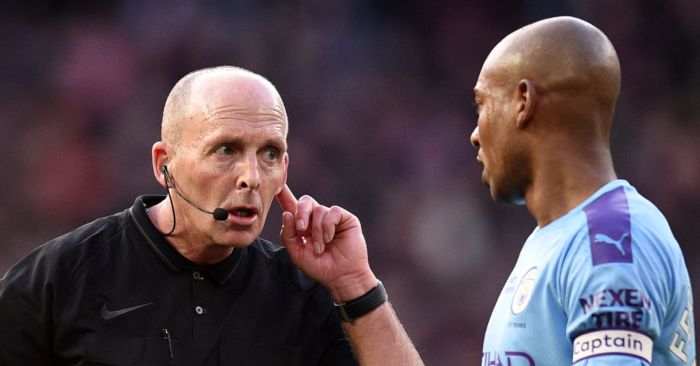 Send your thoughts to theeditor@football365.com if you want a Friday afternoon Mailbox, lovely people

Ref word
I’ll be honest this maybe something that already happens and I am not aware but instead of officials doing post match interviews can their reports be made public?

My worry if they are put in front of the camera is they will start to become celebrities or at least think they are. I don’t mind Mike Dean, in fact I think he is quite entertaining but imagine all of them were like that? It would be horrific.

But there should not be any secrecy around why decisions are made. I believe the officials should me miked up and we should hear what they are saying to the video officials like we see in Rugby.

If the players swear then punish them with heavy fines. They already should be punished for dissent and this would help in that regard also.
Sam, Newtownabbey

In response to the mails this afternoon about referees and why they don’t do interviews. They don’t do interviews because they can’t stand in front of the cameras and say ‘I f***ed up’, a player can, a manager can, anyone but the ref. They can explain why they’ve given some decisions or if someone was in their way thus restricting their vision but when it comes down to them simply having got it wrong, they can’t.

I remember that point where they trailed ref interviews after games and I liked it, I liked that they were asked for their views on certain things. Peter crouch has had a couple of refs now on his pod cast (#passthepod) and getting their insight gives you a completely different perspective, it means we get to know them a bit & their personality & makes them a bit more part of the game.

I’d also like to see them mic’d up like in rugby and cricket so you can hear the conversations they have between their assistants and the players… might just get the players to control themselves a bit more too knowing the whole world can hear them calling the ref a c…
Marcel G, LFC

On the negative side, many foreign clubs have been bought up by petrodollar autocracies. I am truly horrified that Saudi Arabia is being permitted to buy Newcastle. Let’s not forget they are currently waging a war in Yemen, which has resulted in the death of over 100,000 people (many of which were killed with British weapons). In addition, tickets to many grounds and TV sports subscriptions have become incredibly expensive over the last 30 years.

On the positive side, the quality of football in the Premier League is phenomenal. I have recently been watching highlights of old games, which while entertaining are similar to glorified Sunday League matches. On the economic side, over 100,000 jobs are supported by the League and its clubs and it generates £3.3bn in tax revenue for the Treasury annually, which is equivalent to building ~10 new hospitals.

So let’s not throw the baby out with the bath water. We should welcome foreign owners who seek to run their clubs well (e.g. John Henry). At the same time, we should bar those who made their money through illegitimate means or commit human rights abuses. In addition, a transition towards forcing owners to involve fans and the local community in the club’s management seems to be a prudent idea. This could involve clubs being forced to guarantee a board seat for a supporter’s representative (elected by the fans) or the more aggressive German 50+1 model.

It is unrealistic and probably undesirable to go back to the pre-Premier League era. However, incremental improvement is certainly possible. In the post Covid-19 world, wider society is likely to have a broad discussion about what has gone wrong with Anglo-Saxon capitalism over the last 20 years. Football, which is a cornerstone of our culture, certainly has a part to play in that conversation.
Oliver, LFC

Firstly, Will works out that the cost in the UK to be able to watch all games shown in the UK (not all games or choice of all games) was £42 per month, based on a nine-month season. This cost, says Will, includes the perks of the complete SKY and BT packages and Amazon Prime delivery. However, this is making the large assumption that the people who pay these prices want the complete packages on offer and don’t just take them to get the football.

I would wager that the majority care little for the packages as scheduled programming is dying and people then to watch what they want, when they want it via players, Netflix, etc. TV has adapted in the main, it is time for sport to follow. People would be more than happy to pay a set amount to get their choice of all Premier League games, when and how they want it.

Secondly, for the Premier League, it makes complete financial sense. The Premier League, for the 2019-2022 cycle earned (or will earn – Covid-19 permitting) £9.2 billion through domestic (£5 billion) and international (£4.2 billion) rights sales. Allowing for my rudimentary maths, this equates to £3.067 billion a season or £340,740,741 per month (based on a nine-month season).

Meanwhile, the global cumulative viewership for the Premier League in 2018/19 was 3.2 billion people, across 1.03 billion homes (not including out of home or mobile viewers).

Now, the cumulative figures will count the same people multiple times, but the homes, it would be reasonable to assume remain the same throughout the season. So taking the 1.03 billion homes as potential Premflix subscriptions, that would be 1.03 billion people, paying £10 a month, nine months of the year. The Premier League would make ten times the amount it’s making now.

Now this model is not good for all football if each league charge £10 pound a month. But that is a different issue for a different mail (or all leagues could come together to work something out in each country/continent, etc.). But for the Premier League, and the customer, this is absolutely the way forward.
Conor, London

Will Padmore needs to remember that the Premier League is a global business. Stop worrying about trying to match the £1.7b revenue that is earned for UK rights and look instead at the entire £3b global TV package.

KPMG tells me that the internal TV audience for the league is 3.2b people. If the league can convert half of these people into paying £10 a month to stream they are now earning £16b per year. I’m not even going to begin to try and estimate the number of pirates this could convert – £10 a month for all games VS £42 a month for some of the games if you have BT broadband and are able to swing a free trial with Amazon again next season. Yes I said all games, use the £16b to give every club in the country enough money to not worry about the UKs 3pm law.

And don’t forget the reason TV companies pay so much for TV rights, advertisements. Not breaks in content, something less intrusive – all the presenters drink from Pepsi glasses, Omega makes sure the games kick-off at the right time and the VAR monitors are the latest model Sony.

Will also mentions production being an issue, the Premier League already produces the content that is viewed internationally, NBC only provides the voices narrating the action. Purchasing a tech start-up already working on this technology is probably going to be the best way to get the platform in place, not cheap but this is the richest league in the world we’re talking about.

It’s the model people my age have been pushing the TV, movie and music industries for years, I know what I want so give it to me now. Make it a fair price and I’ll retire my eye patch.
Neil, IOM

No need to rush
I can’t understand why some football authorities, some members of the press and midea outlets and some of the general public (many of whom voice their opinions on this website again and again and again) are in a hurry to decide to either void the football season or award final places using mathematical formulas.

The way I see it is that If we are 100% sure that the new season will start in August or September, then end last season in whichever way the leagues decide, and move on to a clean start,

But what if football can only start from November or later for example? Then any decision taken know will actually ruin 2 seasons Instead of just the one,
Wouldn’t it be better in this case to finish last season , play the euros and even stage the Olympics and the world darts championships if u want, there is a whole lot of stuff in the calendar that needs fixing.

So can we all just calm down and focus on more important matters at hand , and then when we know for sure when football can start again, that is when a final decision should be taken on last season,,

It is wrong to fleece “evil” corporations  by illegal  streaming because their employees and customers are innocent and shouldn’t be tainted by mere association.

But it is fine to criticize/shame Newcastle fans and the big money players they’ll eventually buy (some already have forks out for them) because the owners are evil.

Glad that’s cleared up.
Ashish S (Not even a Newcastle/City/Chelsea Fan)