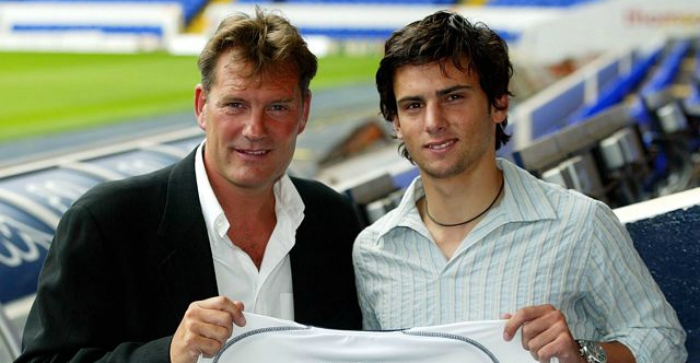 You went quiet on us right at the end of the international break. Smacked bottoms all round. Send your mails to theeditor@football365.com…

Helder Postiga: Really very sh*t
Oh how I screamed with childish excitement when Spurs signed Helder Postiga, a worthy pick for your dregs xi. That game provides me with my abiding memory of the man himself.

As a 90’s child my memories of winning away at Arsenal were non-existent. My first game at Highbury and we take the lead through a Darren Anderton goal. Cue bedlam in the away end. Only 80 minutes to hold on.

It wasn’t. We held on for an hour or so during which time Postiga missed two absolute sitters to put us further ahead. Pires equalised and with 10 minutes to go Ljungberg hit a nothing shot that ballooned off Carr, looped a mile up in the air, went over Neil Sullivan’s head and landed in the middle of the goal.

Postiga was sh*t. The result was sh*t. Spurs were sh*t.

And if you don’t believe me quite how bad Postiga was, read this match report

Football365 endorses this result
Imagine my shock this morning opening the mailbox to find no mention of last night’s big game. And what a game it was. Billericay vs my local non-league team Leatherhead in the FA Cup First Round, I say First Round but this replay was actually the Tanners 6th game in the competition following the draw a couple of weeks ago against the non-league millionaires from Essex.

Billericay are a team paying the sort of wages that attracts such luminaries of the game as Paul Konchesky, Jermaine Pennant and Jamie O’Hara. Their mural loving, R Kelly singing owner/manager Glenn Tamplin had this to say before the game…”With all due to respect to Leatherhead, we’ll tear them apart at home.” That went well.

A dire first half where neither team really managed to build any momentum was followed by an excellent second half. The Head conceding first but replying almost straight away through Jack Midson, the ex-AFC Wimbledon striker and now assistant manager heading in from close range. Not too long after he added his 11th FA Cup goal of the season from the spot before player manager Sammy Moore finished the tie off at the death to make it 3-1.

The game was live on BT Sport and although I doubt many neutrals tuned in, those that did would have seen a great advert for non-league football. Short on quality but played with a real honesty and respect between two teams that don’t particularly like each other and have had a few barneys in recent years.

I’m a Palace season ticket holder but I have to say there is something about this level of football that is really enjoyable. Getting yourself a pint, standing behind the goal, giving the opposition goalkeeper some stick before switching ends at half time to stand behind the other goal. If you’re finding yourself disillusioned with modern football, the non-league is a great antidote. Next up in the cup are Wycombe Wanderers at Adams Park, can’t wait.
Ant, CPFC

Abolish prize money for where you finish
I wholeheartedly agree with the previous mailbox concerning the cost of creating pathways for dem yout. My own opinion is that this barrier was forever cemented with the ludicrous idea of prize money for places within the Premier League.

It has not, does not and never will matter where a side finishes in mid-table. Previously end of season dead-rubbers were both an excellent opportunity to blood youngsters and also a nice preview of what might be to come for fans. This also means first XI’s will be fresh for games against title/relegation candidates improving the integrity of the whole competition.

So why not abolish the additional prize money incentives per place? Clubs will still get all broadcast revenue etc. and aren’t exactly strapped. This money could be distributed in another way such as grass roots development. If money must stay in the Premier League than maybe rewards could be distributed to those that have developed players?

In summary I think fans, both of the teams involved and also generally, would rather see young players getting minutes than watching Stoke and WBA in the race for 12th.
Dan, LTFC

Roasting chicken
A bit late to the party but these are my thoughts on Steve Chicken’s column from yesterday:

£20m purchase from Sunderland, £35m purchase from Newcastle, record fee paid for the highest rated 15 year old in the country, U17 Euros winner who had already made his first team breakthrough at Charlton and two academy players. Is that really a good opportunity return for a period of 10-15 years?

I could labour the point by going through his other lists (the £100m duo of Stones and Sterling made the Man City list for crying out loud) but they are all as ludicrous as that list of twelve dozen young players Jose Mourinho claimed to have given opportunities to. At least he didn’t even bother try to make one for Chelsea.

If you’re arguing a point with lists that weak you’ve already lost. When the sum total of the cream rising to the top is 8 academy players between Chelsea, Man United, Liverpool, Man City and Arsenal in 10-15 years how could anyone genuinely believe that there isn’t any talent slipping through the cracks?

Mr Chicken also thought he could get away with mentioning two of the players who prove a strong counter argument to his own point in an aside – Lukaku and De Bruyne. They were clearly both good enough but neither played. And yes neither of those examples are English but as anyone who watched the England youth teams over the summer will know English academies are producing talent a clear step (or five) above Jay Spearing – Steve Chicken’s chosen strawman – these days. Will they actually play or will they be the next De Bruyne’s?

Ruben Loftus-Cheek, who always outshone Dele Alli for England U19s back in the day, got MOTM on his England debut – how many caps would he have now if he was playing regular senior football three years ago? You could put good money on the next Paul Pogba out of an English academy actually being English (and probably being Jadon Sancho).
Alec, London

Well, quite
Firstly, James McClean does respect “those circa. 49,000 Irish soldiers who died in WW1”, some even basic research would show this. He’s stated numerous times that if the poppy represented those that had fallen in the World Wars, that he’d have no problem wearing one. He refuses to wear one due to the fact that it represents ALL conflicts and former and serving British soldiers, including those that mowed down 14 innocent civilians in the estate James grew up in, and those that colluded in such incidents as the Loughinisland massacre, the Miami Showband shootings etc. There is literally a list as long as my arm.

He also received a tweet from a serving soldier this week. Taken with his squad, on the streets of Derry, stating “We love Sundays. No apologies. No surrender. All in a day’s work. Derry skiprat”. The soldier probably thinks he’s just a dirty player, eh??

Secondly, there have been many dirty footballers. Vieira, Barton, Jones etc all through the years and none of those took the vitriol that James McClean takes.

So don’t try to deflect from what you know are the real reasons McClean takes so much abuse. Be a man and stand up for what you believe, like James does and stop hiding behind pathetic excuses.
Weldoninhio, Dublin

Another good book recommendation
A lot of discussion about giving domestic players more game time in the premier league to benefit the national team and whether the calibre of player is sufficient to make a breakthrough.

Those interested in the topic could do worse than to treat themselves to an early xmas present in the form of Mister: The Men Who Taught The World How To Play by Rory Smith. Finished reading it last week and have no hesitation in recommending it.

While you’re at it, pick yourself up a copy of Portrait of Icon too.
Killian, Limerick