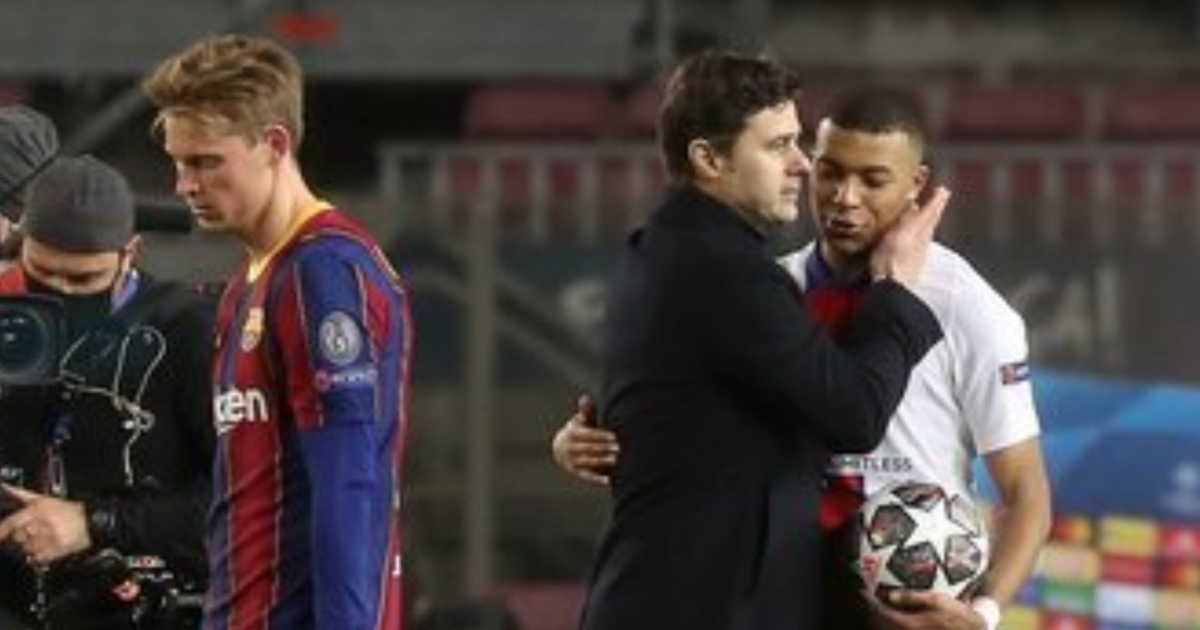 Send your thoughts on Barcelona schadenfreude and more to theeditor@football365.com.

Xabi Thiago
The high line RB Leipzig played was suicidal. Liverpool looked good because they beat the press and could always play it high and long and our attackers were all over it.

Alisson looked good with his feet again which was encouraging as he looked like he forgot how to kick a ball for the past couple weeks. He also made a top save at the start of the second half.

Jones is young and he’s probably playing a lot more football than Klopp would want him to in the ideal world but on nights like this you imagine that 5 years from now an England Manager will have a headache trying to work out how to get him and Foden to reproduce their club form at a national level. His touch is so slick and he is so skilful, he looks like a nightmare to defend against because he’s so adept and can run, turn or pass at any moment.

Thiago is so much like Xabi Alonso in so many ways. The thing they have most in common is a totally inability to defend. I think when Fabinho recovers and comes back into the team Thiago should look better because he’ll be told to play further forward where his defensive instincts can be given a break.
Minty, LFC

European Super League time
Watching the first half of Liverpool vs Leipzig here and for what feels the first time in months I’m enjoying a game of football.

The opposition are trying to play us and score. The game is flowing back and forth, I even saw one or two Liverpool players smile already. And lo and behold when a Liverpool player is hauled to the ground or chopped down a foul is called or stop the press a card issued. It seems bizarre to watch but it should of course be the norm.

And then it struck me. What’s wrong with Liverpool this year. It’s Brexit.

Hear me out. We’ve all been so distracted by Covid maybe we missed the greatest change British history of the last few hundred years (I’m crap at history feel free to point out some treaty or battle I’ve never heard of).

I’ve followed Liverpool for over 30 years and I’ve heard always that we were a club that looked to Europe instead of London for inspiration. About how Bob Paisley studied the Dutch school of football and modified Liverpool’s pass and move game to reflect the changes he saw on the continent. The rest of the country moaned about Liverpool passing it back and forth across the half way line while we racked up European cups.

Liverpool is scouse, socialist, European and does not see itself as English, because in a way it’s not. Cut through scouser DNA and you find wild Celtic lines, Dutch, Scandinavian, it a port city that was open to the world and is at home in the world.

Which brings us back to little Britain, turning its back on the world and on itself as Scotland and Northern Ireland eye the exit door. Capital is fleeing from the city of London and without an agreement on services (which Europe won’t give) Britain’s engine is leaking gas and fast with no garage in site.

Meanwhile in the premier league, England’s great modern export, VAR rules, corrupt financially does clubs gain the plaudits, fans are bitter and miserable and tribal and it’s just not that fun at the moment. As a Liverpool fan watching team after team set the low block, foul with impunity, benefit from dubious Var decisions and be celebrated by leering fans of rival clubs just ain’t that much fun anymore, I know go figure.

Tonight I think I see the future.

Leave the sinking ship of post Brexit Britain behind to wallow in its own sense of self importance and decay and move forward with the rest of the world. It’s time to move permanently to our rightful home with the kings of Europe, to watch high level football every week, to leave Boris and red top gutter journalism behind.

I’m ready, I think Jurgen and Liverpool are too, who’s coming with us?
Dave LFC

Embarrassing
For anyone else sick to the back teeth of footballers constantly falling to the ground (Pique, I’m looking at you for Barcelona against PSG) and clutching their faces as if they’ve just taken a bullet I recommend YouTubeing ‘NHL mic’d up fights’ to address the balance.

The best fights are when the two opponents politely ask “Do you want to go buddy?” then try to belt seven shades of shit out of said opponent whilst grabbing their jerseys with the added difficulty of trying to balance on skates.. on ice.

It usually ends within ten seconds and they then start to bemoan their lack of cardio afterwards and congratulate their opponent on a ‘nice job’ .

It really does put into perspective the embarrassing ‘gamesmanship’ of professional footballers.
Kiarian

PSG at the wheel
Thank goodness we stuck with solskjaer.
Matt(Utd, NY)

Poch
I wrote in recently about sourcing all my joy from Arsenal, well, being Arsenal. It’s my birthday today (cheap pop), and I was heartened to see Poch‘s PSG smash Barcelona this evening. The irony of Poch delivering that trophy with that team will hopefully snap Levy out of this terrible nightmare we are all in.
Jon (36 years young), Lincoln

Schadenfreude
As an Arsenal fan who saw a steady procession of our best talent be hoovered up by Barcelona, there is more than a little pleasure to see their travails. After dominating Europe for close to two decades, I’m glad that even they are vulnerable to the ending of eras. Don’t get me wrong, we’ve seen arguably the greatest footballing sides ever to play the game, but I’m finding their decline more enjoyable.
John Matrix AFC

Since turning 30, his aura has diminished and he has often stood there with hands on his hips as Barcelona crashed out of the Champions League with no heart:

2019, outdone by the amazing comeback by Liverpool, despite Barcelona winning the first leg 3-0 (Messi scoring a hat-trick admittedly).

2018, knocked out on away goals by Roma, despite Barcelona winning the first leg 4-1.

Okay, he is still scoring goals, and it could be argued with credibility that he hasn’t been helped by both the supporting cast around him and the Barcelona recruitment, but his impact on the biggest games has waned year on year.

Then again, his obscene wage is seen as a contributing factor to the massive debts at Barcelona. It’s widely known that Tom Brady took pay-cuts in order to improve the salary cap and thus strengthen the overall team.

Meanwhile, since turning 30, Ronaldo has won three champions leagues and has shown no sign of slowing down yet. Nevermind, Brady winning a Super Bowl at 43, will Messi be still performing at the same elite level Ronaldo is now at 36?
Brian (Pique wouldn’t displace Maguire or Lindelof at United), Wexford.

UEFA had a problem with the old European Cup, which is why it was rebranded as The Champions League.  The last 8 teams in the old European Cup in its final season of 1991/92 were:  Sampdoria, Red Star Belgrade, Anderlecht, Panathinaikos, Barcelona, Sparta Prague, Benfica and Dynamo Kyiv.

The UEFA Cup (secondary competition) often had stronger teams in the final stages than its more senior counterpart.  Even the Cup Winners Cup (tertiary competition) sometimes had stronger teams in it than the European Cup.  In the very same season of 1991/92, the last 8 teams in the Cup Winners Cup were:  Atletico Madrid, Club Brugge, Werder Bremen, Galatasaray, Roma, Monaco, Feyenoord and Tottenham.

How could UEFA have a tertiary competition with stronger teams than its flagship competition?  Something had to be done.

So, along came The Champions League, and nobody can doubt that the strongest teams in European football now reach the latter stages of the new version of the European Cup.  But at what expense?  A discontinued Cup Winners Cup, and a bloated Europa League that is seen as the ugly sister of the big one.  So, what is the solution?

A third tier of European football enables the bloated Europa League to be streamlined, and more competitive.  Losing 12 teams from the group stages enables the groups to minimise the difference between the teams in pot one and pot four.  Winning your group in the Europa League is now harder, and the only way to guarantee a place in the knock out stage of the tournament is to win your group (Runners Up will need to defeat 3rd placed UCL teams), and so the Europa League is immediately more competitive, more challenging to win and subsequently enhanced in status.  The new UEFA Europa Conference League provides opportunities for teams from smaller nations to actually progress to the latter stages of a European competition, and creates a very defined 3rd tier.

So, UEFA have now essentially created three divisions of European football.  Gone are the days where divisions two and three could have stronger teams than its flagship competition.  We now have a very defined and better balanced pyramid structure.  Surely this makes sense?
Naz, Gooner.

The statue of David
Having come across this article I think it is much more enlightening about David Luiz than it is about Saliba.

These comparisons are between Holding, Saliba, Gabriel and Luiz. There are rumours about a contract extension currently kicking about. By these stats he is currently out our worst defender. He also massively slows down play and takes an age to bring it out of defence before either turning backwards or launching the ball upfield(often unsuccessfully). There have been rumours of his falling out with arteta (for balance also lots of talk about him being a being good influence in the dressing room). I understand the need for experience at the back, but for large wages and poor performances is his new contract extension worth it for Arsenal?
Dave (Heard alao he might have given away a penalty or two? ) Windsor

The Mailbox
It can’t have been just me who thought the mailbox compiler had been particularly mischievous yesterday with the first two entries being a well reasoned and well thought out email on Arteta and Arsenal from Shahzad, Pakistani Gooner in exile in Dublin, Eire immediately followed by the inane ramblings of ‘Arsenal fan’ Stewie Griffin!  Stewie’s ramblings don’t even require a response because the correct response simply pre-empted his mail in the same mailbox.
Rich (AFC)