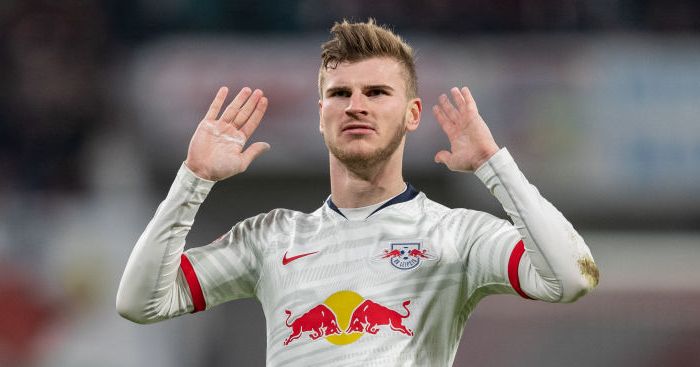 Send your thoughts on Timo Werner and whatever else to theeditor@football365.com

Watch and Wern
Timo Werner. Wow! I’ve always admired him and wished for him to be at Chelsea, but it seemed inevitable he would sign for Liverpool.

If this deal goes through, I think we will easily be one of the most exciting teams next year. I wouldn’t call us title challengers just yet, purely because I’d expect Ziyech and Werner need time to settle in. With that being said, the prospect of a front line of Pulisic, Ziyech and Werner has me drooling. This will take pressure of Tammy and Hudson-odoi, and give us much needed depth up front (another season with Batman and I’d have gone bald pulling out my hair).

Midfield takes care of itself, and if we sign a quality left back, we really will be a force to be reckoned with. I also can’t wait to see a more experienced Mount, James and Gilmour. Next season looks promising indeed…
Tashen, South Africa

Now I am not one to cause controversy on this site, I quite like the community who often write into the Mailbox, but in Friday Afternoon’s Mailbox, Olivier, LFC described Timo Werner as “The German Michael Owen”.

Now many think of the Michael Owen who was at Newcastle, United and Stoke, but I remember Ballon d’Or, Liverpool, Treble-winning Michael Owen, many forget just how good of a player Owen was during his youth before he started to struck down my injuries, his goal scoring statistics before and after that first injury is incredible.

If we get a player similar to Pre-injury Michael Owen in Timo Werner then I for one will be very happy.
Mikey, CFC

You’re right, Fabinho isn’t in the top 3 defensive midfielders. He sits in a class above the rest, by himself, able to do things with and without the ball that the others could either only dream of or have performed a few years ago at the height of their powers. I’m am of course exaggerating, but if we analyze your cases in point a little closer:

Kante – Largely irrelevant this season. Although his 16 league starts match Fabinho, he’s been largely in the shadow of Jorginho, Kovacic, and occasionally Ross Barkley. His form in the matches he has played hasn’t been anything special either (see the 39 goals Chelsea have shipped this season). An in-form Kante is the best DM in the league, but it’s been a while since we’ve seen him.

Fernandinho – Spent most of this season playing at CB desperately trying and failing to hold Manchester City together. City also bought Rodri to reinforce a position in which Fernandinho has been weakening for some years and needing replacing. While capable of the occasional throwback match-controlling performance, he certainly hasn’t been the best DM in the league this season.

Ndidi – Probably the only one in the conversation. Absolutely excellent for most of the season. However, much like the Leicester team around him, he’s a bit of a flat-track bully. Shuts down the leagues less potent attacks but comes up short against rivals.

The trouble with this season is how long it’s felt due to its absence. Making it difficult to remember Fabinho’s pre-injury form. He was, quite simply, our player of the season. You might remember we haven’t exactly ripped teams apart this season. Instead, particularly pre-xmas, we dragged ourselves to 1 goal hard-fought victories. He was at the center of most of them.

My belief, with this Liverpool team, is that Jurgen Klopp has many of them operating at the absolute peak of their powers through training and motivation. The likes of Wijnaldum, Milner, Henderson and even the Ox come to mind. They’re with the right manager in the right team at the right time. Fabinho on the other hand. You could drop him into any team in the world and he would slot in seamlessly. He’s that good.
Ryan C, LFC

Let’s talk about Cesc
I recently stumbled upon an article about players with the most bookings in Premier League history and I must say I was genuinely surprised by Cesc Fabregas’ position. He’s 20th ahead of Roy Keane(!).

Maybe it’s just me but my memory of the player is not of a cynical sh*thouse or a mad leg breaking lunatic. But rather, I remember him as an elegant passer and brilliant world cup-winning Spanish playmaker. Add to that his looks and you may be forgiven for thinking he’s a slightly older (and taller) Juan Mata. Apparently he isn’t. He’s far more comparable to Roy “deliberately broke Haaland’s leg” Keane.

Fabregas had 71 bookings to Keane’s 69 but actually played fewer games and minutes than the Irish mad man. The list of Premier League angels with fewer bookings than Fabregas include: John Terry (69), Ashley Young (70), Jamie Carragher (70), Robert Huth (68). With the exception of Huth, they all played significantly more matches than lovely Cesc.

I’m not sure what the point of this mail is but I guess the discussion around Heung-min Son made me wonder if some players’ brilliance and flair often overshadow their character and attitude.

Then I found out he was the one responsible for throwing pizza at Ferguson during that infamous ‘Battle of the Buffet’ at Old Trafford in 2004. He was 17 and in his debut Premier League season! Okay he was probably just a shifty little b*stard.

On a different note, I was glad Aaron Grimes called out the nonsense of Fabinho being the best DM in the league for what it is: bulls**t. While I don’t necessarily disagree with his top 3, Kante is having his worst season in the EPL and Fernandinho has played as a centreback.

The best defensive midfielder in the league is surely Ndidi. He’s somehow underrated perhaps because he doesn’t play for a top club or he isn’t English or Brazilian but oh my, he’s fantastic. I know I’d love him at my club.
AY

Slam Dunc
I’m not sure there are a set of inverted commas big enough in the world to go around Duncan Castles’ ‘transfer expert’ moniker.
Tom, Walthamstow

I’ve written in to the mailbox with this story a couple of times in the past and it’s been published each time, not because it’s very well written or anything like that, but because it’s about Paul McGrath and what an utter gentleman he is.

About ten years ago when I was in my early 20s I, along with a group of pals, went to stay with a friend who lived in a remote area of south east Ireland for a piss up. Having drunk most of the day away we decided to venture into the nearest village for a few pints. On arriving, we realise there was a charity fundraiser taking place and Paul McGrath was the guest of honor. After shoving my way through the crowd, I reach the great man and he just looks cool. Dressed all in black, crooked, shy smile on his face. I proclaimed my admiration to him several times and asked for a photo. Due to a mix of booze and excitement it took me what felt like a thousand years to actually take it and I apologised over and over, feeling like I must have been annoying the life out of him.

Paul McGrath just put his hand on my shoulder and said “take your time, you’re a top man.” This nearly made me burst with happiness and eventually I got my photo. I was absolutely floating for the rest of the weekend. But always in my mind I’d come back to the calm and gentle aura he had about him which was a such a contrast to his well documented turmoil. He spent the rest of the night hanging out in the pub – sober I might add – making people happy by simply being there. He’s a genuine legend and an awesome human who deserves all the love and respect he gets.
Alan, Córdoba.

Sake, Ken
This is directed to Ken, the absolute kn*b who tries his best to troll, irritate and just be an assf*** in the F365 comment section, and now the goddamn mail box. From what i have seem, he is a fellow United fan which saddens me. The man refuses to focus on the team he supposedly supports and has spent hours trying to troll every liverpool fan in sight. So let me answer this for you Ken, YES Liverpool’s league title counts the same as any other ones. YES its legitimate. They are 25 points ahead of the nearest competitor, and a million or so points ahead of United. I for one am angry that they are winning, but they deserve it.

People like Ken defines every toxic trait you see online and why people have lost hope from humanity. Imagine having to deal with a dude who’s sole aim in life is to troll random strangers on the internet and write hogwash just to gain some attention. Well Ken, i replied. Congrats you attention seeking little man. Shame on you.

To the other F365 people, can we as a group decide to ignore him ,and his 3 other fake accounts and not respond or rise to the bait ? Thanks.
Aman