Home All The News Mails: Who is to blame for the Riyad Mahrez debacle?

Not Leicester, according to a, well, Leicester fan. And can we agree that Lukaku is a bit rubbish? 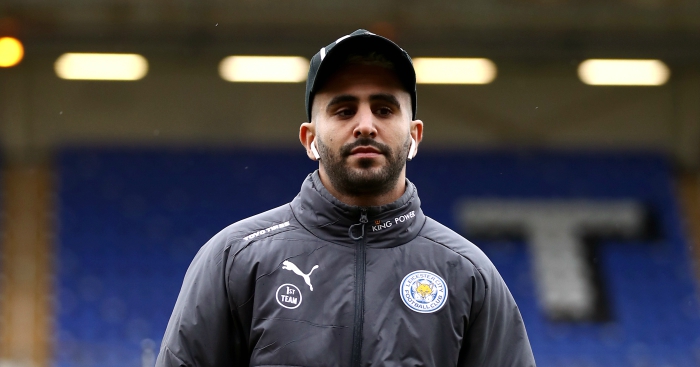 Leicester have done nothing wrong
As a Leicester fan (and probably like most) i don’t begrudge Mahrez from getting a move to a bigger club. What’s been utterly embarrassing is the ridiculous media bias in the way we’ve been treated. At the weekend on MOTD we had the pundits calling for him to move (Gabby Logan went as far as to say for £40 million). We’re then portrayed as the bad guys when no one came close to our valuation. Lets just stop for a moment and remind ourselves that he’s been a better player statistically then Coutinho and won more the Van Dijk.. but it’s little old Leicester.. they should be happy with a small value because well, he deserves a move. Countless pundits have called for him to be given a move he deserves it.. well we deserve to be paid the value we see fit.

The bid if it even came in from City was a joke, it left us with 24 hours for a replacement for a player who looks in the form of his life, well under the value we’d placed on him. If Mahrez had been at a bigger club in the same situation no one would have batted an eyelid at the valuation, but it’s only Leicester..

We found him, we nurtured him, we gave him the opportunity to play and we’ve been pretty fair and said if the right bid comes in we’ll let him go, but we’re the bad guys because we want a decent value on a former PFA player of the year who frankly has been a great player in a smaller team.. you’d expect in a bigger team he’d be even better.

I don’t remember Southampton or Liverpool being berated for not giving Coutinho and Van Dijk by a load of middle of the road pundits on the box.. Give us a bit of credit for showing bit of backbone and looking out for own club.

Hopefully he can pull himself together and show us the love we’ve given him and get his move in the summer.
Shram (fox in exodus).

Cross your heart
I think Ted from Manchester is wide of the mark when he says Trippier’s cross for Jone’s OG “wasn’t actually that good a cross “. I’m no expert but……..

As crosses go it wasn’t half bad…
Rex Conlon

Lukhahahahaku
My hope is that Belgium pick Romelu Lukaku to play against England.

I agreed in the summer , lets not judge him till he´s played and scored against the elite teams in England and abroad.

So can we please agree that he is a ¨mid table team¨ level player ?

I reckon the sample size we now have of RedRom gives us the ability to be fair when judging him as not good enough for any team in the top six.

Now, Jo Mourinho won´t like to be proven wrong so don´t hold your breath for a United attack sans Lukaku for the rest of this season and probably next. (hold on ! perhaps he could turn him into a central defender).

Hopefully Hazard and De Bruyne will also be knackered by June, I don´t get why Josep Guardiola hasn´t been thinning out De Bruynés appearances, will he break him before May ?

Massive compliment
I watched La La Land with the missus this week, and the Ryan Gosling character looks exactly like Harry Kane when he’s dancing.  He really does, it’s a bit freaky.
Ben B, MCFC

…and his name was…
Graham Simons touched on school football and the folklore about some youth players. Let’s do some mailbox nostalgia with the big reveal at the end!

When I was in 6th form one of my friends was coaching the year 9 team. Once he told a few of us that there was a game that evening and there was a kid playing on the other team who had a real buzz about him. This kid played as striker and was getting a hat-trick every other game I remember him being described as both “rapid” and “a unit”. In the warm up he looked like he was about 5 years older than everyone else. If memory serves he scored 2 that evening and generally dominated everyone on the pitch.

And that players name… was Victor Moses

Reminiscing them days
I know football has moved on and with it so has F365. The mailbox has moved with the times and I read a lot of Trolls and opinions on why team X needs to spend 90million on a player to solve a short term problem etc. But indulge me. The mailbox used to be a place where on a Friday someone could post a random (fun) topic in the morning, and we would get some genuine hilarious anecdotes in the afternoon. Trust me, it was better than reading the latest Wenger out, Utd need to buy some extortionately priced player or top 6 manager is a fraud because they lost 1 game hyperbole.

So what am I proposing?

Well I’ve had a few Thursday night drinks and I’ve been reminiscing about my University 5 a side team. I lived in a house with 6 other guys and together we could get together a pretty decent 5 a side team with 2 subs that maybe weren’t so decent. We decided to enter into the local Goals league. Being based in Leicester, we were subject to the local teams as well as being the nearest location to the much famed Loughborough university with all their sporting exploits. Our best player, absolute goal machine and leading striker for the Uni team was in charge of organising our entry, and was offered a opening in the top division of the Thursday night league or the bottom.

In a Tim Sherwood act of confidence he plumped for us to be placed in league 1. Confident we could hold our own.

We get down there and do the usual registration and paying of fees to be told good luck, you are going to need it against your opposition. Upon seeking clarity we discover that our first opposition for the infamous Clarendon Park Road debut game were a team that had recently returned from the 5 a side national competition and finished 4th. That’s right. A bunch of out of shape, self confident Uni students. Who couldn’t agree on who was going in goal, so rotated on a everyone plays a half each on a rotating basis regardless of how good you are. Were about to take on the 4th best 5 a side team in the UK.

The positives of the game. Our maverick of the team (me) scored an absolute peach of a goal. Dummying to leave the defender on the floor and smashing the ball in the bottom right corner of the goal.

The negatives we conceded 35 goals with a final
Result of 35-1.

Has anyone got a better football 5 a side story to tell, to humour a bored pretending to do work but just reading the Internet worker. Or have I got to skip through another load of crisis/ cry baby fans on a Friday afternoon.
DB (humorous brackets)