Home F365 Says Make us safe, but don’t make us feel like criminals… 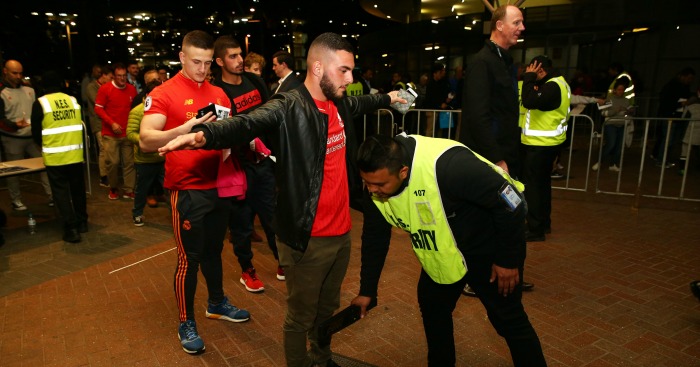 As was sadly inevitable after the terror attacks in Manchester and Westminster last year, security at gigs and football matches has kicked up a notch.

After seven years of reporting practically every weekend without ever being asked for anything more than my name and occasionally my accreditation, Bradford City implemented bag searches for the press at the beginning of last season. This year, Leeds United have joined them.

Likewise, when I was at the Women’s Champions League final in Cardiff and the Women’s Euros final in Enschede, the biggest queues were not for the concessions stands or the turnstiles, but for the bag and body searches on the way into the ground, which took around 30 minutes to get through even though we had arrived really early.

We all accept this state of affairs, albeit on some scale between ‘happily’ and, in my case, ‘begrudgingly’. Obviously, there are necessary evils to ensure some degree of safety. I am also extremely mindful that many of those affected by terrorist atrocities may understandably adopt a ‘safety at all costs’ attitude. To ignore or dismiss those concerns out of hand would be inhuman.

But at the same time, there is a huge amount of truth to the argument that life is inherently unsafe. Unless we’re going to spend every second of our lives huddled in a foetal position in the corner of a lovely padded room, we are always going to have to find a compromise between liberty and security.

It is incredibly important that we ensure the lines we draw remain the right side of reasonable. While I don’t want to get all slippery slope about it, it is too easy for failures of common courtesy to become policy. This week, on my way into a gig, a security guard at Manchester Academy rifled through my wallet without so much as asking me first.

It isn’t much on its own, and I’m 100% sure that by bristling at it and then complaining to the venue, I am absolutely being That Guy. But allow that kind of thing to go unchecked, and you get security at Stevenage FC asking female Grimsby fans to lift their tops and show their bras, as happened over the weekend.

Clearly, this is a wider societal issue, but it is especially a problem in football, where fans have been pre-emptively treated as criminals for decades: where every ticket purchased must be assigned to a named individual, beer can be drunk but not within view of the pitch, tickets must be picked up at motorway service stations and fans herded to the ground under the kind of close supervision normally only applied to prison inmates.

We are so set on the idea that fans are combustible elements that must never mix with one another that the idea of attending a major football game as a neutral is not catered to at all in this country. The idea that this enforced segregation may make things worse, not better, seems not to have occurred to the authorities.

Now we’re adding bag checks and body searches – and for what? We don’t get searched on the way into supermarkets, office blocks or railway stations; why football grounds? It hardly bears thinking about, but frankly, what chaos could someone cause inside a ground that they couldn’t simply unleash on the hordes of fans waiting outside the ground to equally shocking, devastating and deadly effect?

Just to continue that discomforting thought, we must not forget the lessons we learned from the horrific tragedy of Hillsborough. One of Lord Justice Taylor’s findings in his second report was that going ahead with Margaret Thatcher’s appallingly dehumanising ID card scheme would, if anything, lead to more crowd trouble, as entry to grounds would become so slow as to cause frayed tempers to boil over into violence.

Basically, if you treat people like animals, there’s a very good chance they’ll behave like animals. That being the case, then, what on earth are we doing by treating people like criminals in the name of safety and security? Is that really how we want to live?

Going to a gig, a festival, or a football match is a release from everyday life – something we do so that, for a couple of blessed hours, we can go unfettered by the worries of money, mental health and mortality. That privilege is stripped away with every pat-down, bag search, and shirt-lift.

There are already enough tremendous b**tards out there who would love to take that away from us. By acting like that is everyone’s game, we are taking it away from ourselves. The b**tards don’t need our f**king help.