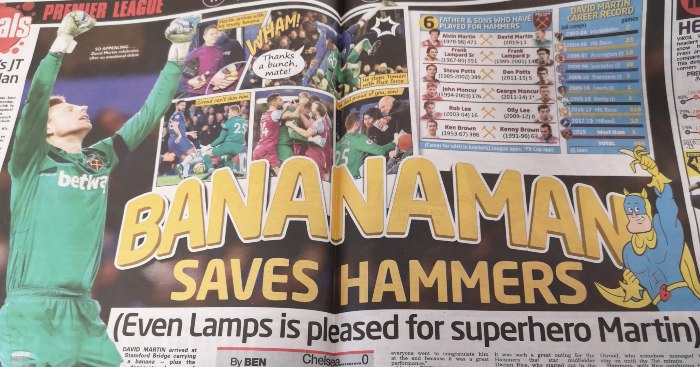 Bananaman. Because he arrived at Stamford Bridge carrying a banana.

Superhero. Because he arrived at Stamford Bridge carrying a banana.

Fruit force. Because he arrived at Stamford Bridge carrying a banana.

Nice to have it confirmed that Britain’s best-selling newspaper is officially a comic.

Rodgers and in
Leicester City won their sixth consecutive Premier League game on Sunday and remained eight points off leaders Liverpool in second place. So what is on the back page of The Sun? It’s Brendan Rodgers trying not to talk about the Arsenal job, obviously. F*** the actual football.

‘BRENDAN RODGERS revealed he has a release clause in his Leicester contract which could open the door to Arsenal.’

Except he didn’t, did he? He was directly asked about a possible release clause and this was his actual answer:

“There probably is in most managers’ contracts. It’s all hypothetical with these types of situations. The best thing for me at the moment, we’ve had a brilliant win today and we came back really well.”

He hasn’t sodding ‘revealed’ anything; he has simply answered a question. And then desperately tried to turn the conversation back around to Leicester and the fact that they are in phenomenal form. Silly Brendan.

Over on The Sun website, they are sticking with this narrative – despite Rodgers explicitly saying that he is not interested – though there is some confusion about exactly who or what is opening the door. According to Duncan Wright, ‘BRENDAN RODGERS has opened the door to Arsenal after admitting there is a clause in his contract allowing him to leave if a big offer came in for him.’

Has he balls. What was his option? Denying there’s a clause and so essentially lying? If Mediawatch admits there is such a concept as divorce, are we ‘opening the door’ to a new wife? If so, we are in all kinds of trouble.

By Tuesday morning, the story has moved on and now ‘Arsenal ‘contact Leicester over Brendan Rodgers’ as Foxes boss confirms exit clause in his contract’. It’s on.

Incidentally, what did Leicester say, according to these reports?

‘But while Rodgers is on Arsenal’s radar – The Athletic claim that Gunners chiefs have been told in no uncertain terms that the Foxes manager is “happy and going nowhere.”‘

Does that mean he has opened the door and then pretty much immediately slammed it shut? Him and Mrs Mediawatch both.

Which is one hell of a way to bring the news that Arsenal might opt for multiple Serie A-winning manager Max Allegri.

‘Arsenal board plan to offer Freddie Ljungberg permanent job on one condition.’

Is that ‘one condition’ that he wins some football matches?

However did we guess?

Realisation of the day
‘SO maybe it wasn’t all Unai Emery’s fault after all’ – Mark Irwin, The Sun.

Crooks of the matter
Garth Crooks has gone finally gone full Garth Crooks, picking just one centre-half in his BBC team of the week. Presumably, Virgil van Dijk is so bloody good that he simply does not need any help. Couple of full-backs in a back three and James Ward-Prowse/Todd Cantwell as wing-backs; that’s the ticket.

In goal, Crooks has picked David Martin, but just how bloody miserable is this sentence about the weekend’s most emotive story?

‘Football can be a cruel and ruthless sport and Martin would do well to not blow this opportunity by listening to the hype.’

Crooks includes Trent Alexander-Arnold and Aaron Cresswell as his auxiliary centre-halves (of course), though the West Ham left-back is really only included so Crooks can talk Chelsea:

‘Just when you thought the youngsters at Chelsea were making real progress, an incident comes along to remind them the game is not as easy or as straightforward as they thought.’

Pesky fact: They have only won one of their last five games; they kind of already knew that football was not easy.

Howe is Eddie the answer?
There is some merit to Stan Collymore’s theory in the Mirror that Everton should go for Eddie Howe after ‘the myth of Marco Silva’, though making it all about his nationality is utter nonsense. As is throwing in the name of Chris Wilder as a poor, overlooked British boss after just 14 Premier League games.

‘Everton need to be looking at progressive young managers who have got a decent record of operating in the Premier League.

‘Managers who can operate on a budget, can spot bargain basement players and with a modern approach.

‘For me that manager would be Eddie Howe who has done an excellent job at Bournemouth and would fit the bill perfectly – but Dyche and Wilder would be good options too.’

Does 14 games count as ‘a decent record of operating in the Premier League’? And is 52 still ‘young’?

But back to Howe, who does at least meet those criteria…

‘Howe has progressively understood you can’t just go out and play open, attacking football otherwise you’ll get three, four, five put past you every other week and you won’t stay in the league long.’

Pesky fact: Howe’s Bournemouth conceded 70 goals last season – the most since they were promoted to the top flight. Oh and Saturday’s 3-2 defeat – their third on the bounce – marked the third time this season that they have conceded three goals.

Apparently, ‘Everton could do with that kind of thinking’. We’re not sure they could.

His name is not Rio…
‘HARRY MAGUIRE was roared down the tunnel at the end of the game and deservedly so as United’s standout performer. They have not had a player like this since Rio Ferdinand left Old Trafford’ – Neil Custis, The Sun, August.

‘The £85million purchase of England centre-back Harry Maguire has not had the desired effect’ – Neil Custis, The Sun, December.

It’s almost like declaring a player to be the new Rio Ferdinand after one game was absolutely sodding ridiculous.

Paul Scholes is your dad

Superb ‘do as I say, not as I did’ from Paul Scholes. Literally wore a jumper and shirt for his first game at Oldham. pic.twitter.com/Ki8hX3brkC