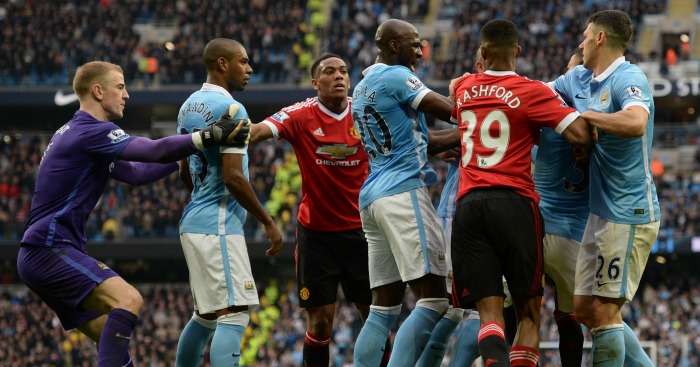 Manchester United were not brilliant and certainly not spectacular, but they were a damn sight better than their woeful hosts. Manuel Pellegrini is destroying much of the goodwill he retains at the Etihad Stadium by failing to inspire his players, firstly to the title and now to even finish in the top four. The gap is down to one point.

In fact, United were something they have rarely been under Van Gaal: Efficient. Gone was the ponderous, slow passing and possession for its own sake, in was a sharpness in front of goal and the speed of play we used to associate with this club. United had only 13 touches in the penalty area, but made their chances count.

* That efficiency was facilitated mostly by the lack of Marouane Fellaini in the midfield. United supporters presumably shed tears of unbridled joy that the Belgian had finally been put back on a bench he should be grateful to grace.

Instead, Michael Carrick and Morgan Schneiderlin were trusted, and promptly controlled the midfield. Schneiderlin in particular was excellent, completing 42 of his 47 passes and rarely (if ever) being caught out of position. As United dropped deep to defend their lead – worrying their fans in the process – Schneiderlin remained resolute. The Frenchman has only completed 90 minutes in 18 of United’s 36 domestic games this season. So, so silly.

Please let this be the end of the experiment with mediocrity.

* Chris Smalling may have improved immeasurably since his performance in this fixture last season, but there was a moment after ten minutes which showed that his redemption is still far from complete. Following Sergio Aguero to the halfway line, the Argentinean toyed with Smalling, dragging the ball at walking pace like he was teasing a puppy.

From the moment Aguero decided to turn and sprint with the ball, Smalling was left for dead. He first let Aguero go clear, and then earned the first booking of the match by tugging his shirt. It looked like man against boy, and made you gulp thinking about the type of striker he will face at the Euros in France. The decision to give Smalling the Man of the Match award also made me gasp.

* It is rightly considered a heart-warming tale, but it really is incredible that Marcus Rashford has suddenly become so key to Louis van Gaal’s plans. Without a goal in five games since his Premier League debut, the 18-year-old has not just been thrown onto centre stage but held under the spotlight. After 15 minutes, you saw why.

The pass from Juan Mata was weighted perfectly, but Rashford did the rest. His skill created the chance, his pace maximised the opportunity and his calm finishing made it 1-0. It was, just to pile on the pressure even more, Thierry Henry-esque in its style and execution.

An 18-year-old born in Wythenshawe and scoring for Manchester United after 15 minutes of his first ever Manchester derby to become the youngest ever scorer in the fixture in the Premier League era? You’d take that. 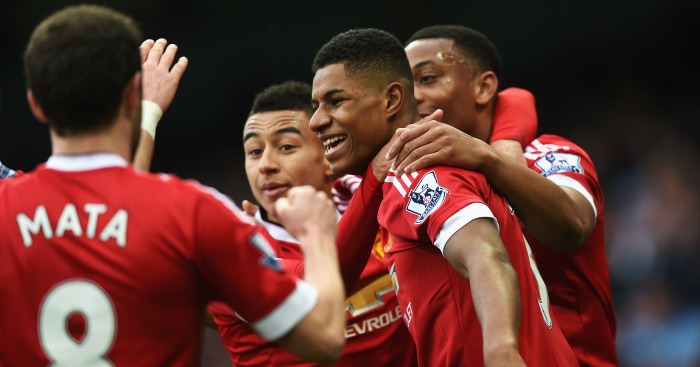 * That said, we really need to talk about Martin Demichelis’ defending. He may well have been more useful to City than anyone ever expected since his arrival, but that time has now ended. When presented with the onrushing Rashford, he couldn’t have sold himself more obviously had he played with a big badge on his shirt saying ‘Sale: £10’.

Rashford’s skill was superb, but Demichelis’ lunge made it far too easy. It was the type of defending offered by a computer opponent on amateur level setting.

* Raheem Sterling’s season started so promisingly, but is ending with a whimper. On only his second league start since February 14, he lasted 26 minutes before being substituted with a groin injury after a tackle by Mata. Roy Hodgson must have cursed his luck; Sterling will be out for three to four weeks.

While the injury is evidently not Sterling’s fault, his recent slump in form reminds you just how young he is. He has not created a chance in his last four league appearances, and has created more than two in one game since October.

* One the other wing, City didn’t fare much better. It may sound surprising that Jesus Navas has not scored a Premier League goal since January 2014, but then you watch him shoot and it becomes obvious. Navas wasted two chances in the opening 15 minutes, and sent another shot wide via a deflection when looking highly uneasy. During the second half, he basically repeated the same trick.

Navas has never been a regular goalscorer, having reached the age of 30 without ever getting more than five in a league season. At Sevilla – and in his first season at City in 2013/14 – that shortfall was overshadowed by his ability to sprint past a defender and create chances. That ability has been too often lacking since.

Navas should be concerned for his future after the departure of Pellegrini. He is the personification of City’s season, bright on occasion but undermined by inconsistency.

* For most of the first half, it was easy to forget that this was a derby match filled with hate or bitterness. Perhaps the two recent United vs Liverpool fixtures made it look gentle in comparison? With that in mind, it was reassuring to see some feistiness between Daley Blind and Aguero.

Firstly Blind went down injured and accused Aguero of a high boot, which the Argentinean dismissed with some wonderful handbags of his own. Two minutes later, Blind charged into Aguero near the corner flag to rile the City supporters in that corner of the ground. Spicy, just like a local derby should be.

* Right on half-time, there was the first moment of real controversy. Rashford went down under the challenge of Demichelis, but Michael Oliver turned down the appeals. For a moment we had 2002 United led by Roy Keane, crowding around the official and imploring him to reconsider his decision.

Replays did not look good for referee Oliver. Demichelis was (again) beaten by Rashford, and thrust his body into the striker to knock him off balance. It was the challenge of a beaten man, left with nothing but a dirty trick to stop a better opponent, and he was incredibly fortunate to escape punishment. When Niall Quinn fails to offer any Manchester City defence, you know it’s a stonewall penalty.

The decision also brings up the subject of officials behind the goal, an excellent innovation used in United’s European match three days earlier. Oliver should not have needed the extra assistance, but those officials are perfectly placed for exactly this type of decision.

As a brief aside, shame on the City players who accused Rashford of diving.

* If Demichelis hadn’t destroyed City’s hopes enough during the first half, United’s secret agent completed the job five minutes into the second half. Receiving a pass from Joe Hart, the Argentinean returned the ball to his goalkeeper but woefully under-hit his pass.

This new piece of ineptitude caused Hart to rush out and challenge Anthony Martial for the ball, injuring his calf in the process. Not only did Pellegrini have to use another of his substitutions, he now faces the prospect of facing Paris St Germain with a back five of Willy Caballero, Bacary Sagna, Demichelis, Eliaquim Mangala and Gael Clichy. For the richest club in world football, that’s an embarrassment.

Five minutes later, Pellegrini brought off his central defender for Wilfried Bony. Demichelis had turned in one of the worst individual performances in Premier League history.

* Having made the incorrect call in the first half over a penalty decision, Michael Oliver then made a big mistake in the second half too. His decision to not issue Smalling a second yellow card was astonishing, given the type of foul and position on the pitch. Even the United defender issued the immediate apology that only ever comes when a player is worried about his punishment.

It’s a cliche, but there is no way that Smalling would have avoided a booking had he not already been cautioned. That shouldn’t make any difference, of course, but it does. Oliver is one of the Premier League’s better referees, but stuffed up twice.

* If you are looking for things that define Van Gaal’s tenure at Old Trafford, there is only one winner. Not him celebrating a goal, his comedy fall when in discussion with Mike Dean or sombre expression when slumped back in his seat. No, the lasting image will be one of his full-backs walking from the pitch to be replaced by another. It’s a pretty bizarre addiction.

* I’m not even sure if Bony is good enough for the top half any more. City’s substitute managed seven shots in his 37 minutes, but any capable finisher would have scored both the equaliser and the winner. Instead, Bony’s performance looked like an exercise in making Demichelis feel better.

I could drone on for a while longer about the negligence of City having Bony as the only senior deputy to Aguero, but a picture paints a few hundred words: 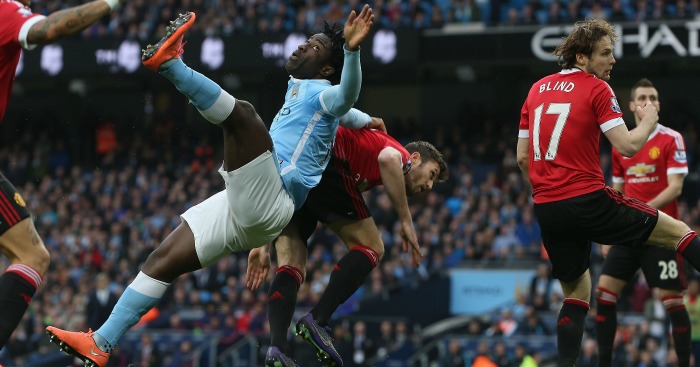 * The phrase ‘football intelligence’ is slightly wishy-washy, but it applies perfectly to Martial. This was another afternoon on which the Frenchman’s maturity and talent combined perfectly. Imagine how dreary United’s season would have been without him.

Martial’s ability to stay involved in a match is superb. He managed 58 touches of the ball, more than Schneiderlin, Jesse Lingard, Smalling and every other United player bar Marcos Rojo, Carrick and Blind (who only had one more touch). Martial was also involved in 31 duels in the match, 13 higher than any other United player and nine more than any other player on the pitch.

Furthermore, Martial is the perfect player when you have a slender lead, capable of dribbling with the ball with the discipline not to waste possession or take a shot. More often than not, he heads to the corner or turns back and bring a teammate into play.

Martial is not yet the finished product, but for a player who only turned 20 in December, he is incredibly well developed. Please, please, please don’t ruin him Jose.

* I’m sorry, but allow me a little rant. Your team is 1-0 down in your local derby at home, the biggest fixture of your league season. The fourth official has indicated that there will be at least six additional minutes, and you are leaving the ground.

What is wrong with you? How bad is your phobia of traffic jams that you need to leave?

Stop it. Stay until the end. If you watch your club in happy times, watch them in times of strife. Especially in a tight local derby.

* However, I can only finish on just how bad City were. As the Guardian’s Daniel Taylor tweeted after the game, City have taken 51 points from 30 games in the league this season. Over the last four seasons at the same stage they had taken 61, 67, 62 and 70. Pellegrini has been abject in his final months in charge, whatever the mitigating circumstances.

Pep Guardiola might have been given some flak for again taking a job at the richest club in the league, but don’t be fooled into thinking that this is an easy job. By way of proof, there now follows a list of players that are either not good enough or will need replacing in the next year: Caballero, Sagna, Pablo Zabaleta, Clichy, Demichelis, Samir Nasri, Navas, Fernando, Yaya Toure and Bony. Good luck.