Home Manchester City Man City ‘did everything’, Palace ‘didn’t do much’ – Guardiola 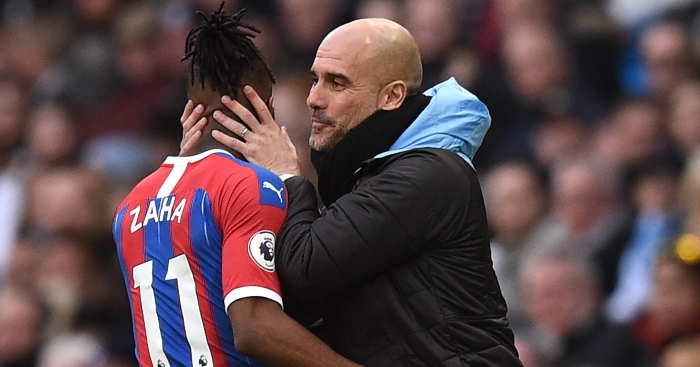 Pep Guardiola tried to shrug off Manchester City’s frustrating draw with Crystal Palace after claiming the champions “did everything” they could to win.

City looked to have snatched victory in a Premier League clash that burst into life in the closing stages when Sergio Aguero struck twice late on to overturn Cenk Tosun’s opener at the Etihad Stadium.

But Palace rallied and claimed a 2-2 draw as Wilfried Zaha forced an own goal off Fernandinho in the 90th minute.

It was the eighth time City – across three draws and five defeats – had dropped points in a disappointing title defence this season.

“I think we did everything,” said City manager Guardiola, who was denied to chance to celebrate his 49th birthday with a victory.

“They defended so deep. We knew that, so we attacked – crosses and corners, put the ball inside. They didn’t do much but they win one point.

“The spirit was there. We tried and we tried. At the end we came back and it was a pity to drop two points in this way but that is football and we have to learn from these situations.”

Palace’s late leveller – which overshadowed Aguero taking his record City goal tally to 251 – came as Zaha got the better of John Stones to cross and the ball took an unfortunate ricochet off Fernandinho.

Guardiola claimed the goal was down to bad decisions rather than mistakes.

He said: “The concentration is always there. It was just a wrong decision and we are going to solve it and improve it.

“In those positions, with the back four there, you have to not let them run. It is simple. In this situation we cannot let them run in this counter-attack.”

City, who also hit the frame of the goal through Kevin De Bruyne, were awarded a penalty for handball against Jairo Riedewald but the decision was overturned by VAR.

“I don’t know the rule of the hand,” Guardiola said. “It looks like hands but I don’t know.”

Crystal Palace manager Roy Hodgson felt his side deserved the draw for their endeavours.

Hodgson said: “It would have been cruel to have lost it. I thought we held out well and our defence was strong until the equaliser in the 82nd minute.

“That came after a fine piece of play – the cross and movement from Aguero. There are certain goals you just have to hold you hands up and say you just don’t know what you could have done better to have stopped that.

“Then for them to get the second so soon afterwards it looked like all our hard work would have been pretty much in vain.

“It was wonderful to see the lads not give up and not accept what many people would have though should have been their fate, and get an equaliser. In the end I am happier with 2-2 than 1-1.”