Home All The News Man City 1-1 West Brom: Baggies earn a point at the Etihad 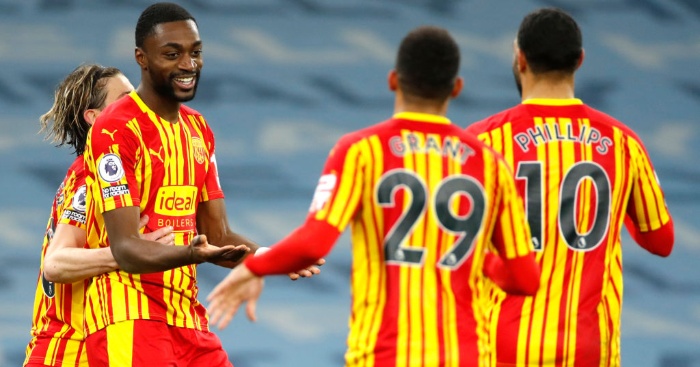 West Brom pick up a point against Pep Guardiola’s Man City at the Etihad after a tireless performance over the course of the 90 minutes.

Ilkay Gundogan fired them ahead on the half-hour mark but after a Ruben Dias own goal brought the Baggies level just before half-time, City struggled to find a way through the most porous defence in the league.

There was late drama as Sam Johnstone made point-blank saves to deny Gundogan and Raheem Sterling in time added on but a late twist would have been harsh on the Baggies and flattered this City performance.

It was the first time City had failed to beat West Brom since 2011, ending a run of 13 consecutive league victories in this fixture, and the result leaves them five points from the summit with all of the top four still to play on Wednesday.

City, criticised for being pedestrian in Saturday’s goalless Manchester derby at Old Trafford, did not start much faster here as West Brom sat back.

The big early chance went to the visitors as Joao Cancelo tried to cut out Conor Gallagher’s pass but succeeded only in playing in Karlan Grant who really should have scored as Ederson got down low to his left to save.

Guardiola had restored Phil Foden to the starting line-up but, even against a side 19th in the league, looked conservative in his tactics with Gundogan sitting deep alongside Rodri.

City did not manage a meaningful chance in the opening 25 minutes and the first that did come their way was from a set-piece as Rodri headed over from a Kevin De Bruyne corner.

But the breakthrough came on the half-hour mark as Sterling got to the byline and cut the ball back for Gundogan to finish from close range.

The game sparked into life as Gallagher sent a shot narrowly wide at the other end before Cancelo had two chances, the first a shot straight at Johnstone from the edge of the area before his ambitious volley from De Bruyne’s corner flew wide.

City were looking comfortable but it all changed two minutes before the break after West Brom were awarded a disputed free-kick for a Cancelo challenge on Grady Diangana.

City only half-cleared and after Romaine Sawyers headed the ball back in, Semi Ajayi turned Nathan Ake before seeing his shot deflected in by Dias, ending City’s run of clean sheets at six.

Guardiola trudged off in frustrated fashion at half-time and his players emerged with much more urgency after the break, forcing early pressure as Foden fired a low ball across goal before Johnstone had to punch clear a deflected Cancelo cross.

De Bruyne poked a shot wide, Jesus headed on to the roof of the net from a corner and Johnstone then blocked a Sterling effort from a tight angle as the chances continued to come.

But West Brom were proving stubborn opposition, dropping in with six at the back at times to frustrate their hosts.

Sergio Aguero, over the illness that sidelined him for the derby, replaced Foden with 15 minutes to go as Kyle Walker came on for Benjamin Mendy.

Walker was straight in the action and his powerful drive from range needed a touch from Dara O’Shea to find safety, but Aguero struggled to get into the game as West Brom defended doggedly.

There were howls of protest when City were awarded a dangerous free-kick when Gundogan tumbled under the slightest of touches from Sawyers, but Johnstone got across to make a fine save and deny De Bruyne.

The goalkeeper then starred again with late saves that secured a big result for Slaven Bilic in his 100th game as a Premier League manager.