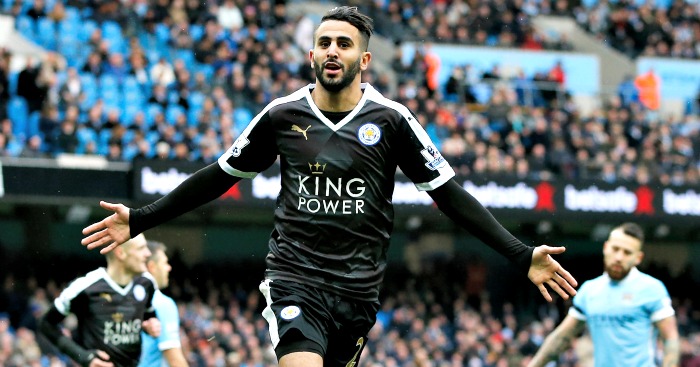 Leicester’s remarkable Premier League season continued with a 3-1 victory over Manchester City at the Etihad Stadium.

The Foxes headed into the clash as league leaders, boasting a three-point gap over Manchester City with 24 games played.

Robert Huth handed the visitors a dream start, firing home a Riyad Mahrez free-kick after woeful defending from the hosts on three minutes.

Mahrez scored an excellent second just three minutes in the second half to double Leicester’s lead, before Huth headed home his second and Leicester’s third.

Manuel Pellegrini wanted news of his imminent departure made public partly in the hope it could galvanise the team for the rest of the season, but on this evidence it had the opposite effect.

Leicester, unheralded at the start of the season, attacked with speed and energy throughout and looked a class above City.

The warning signs were evident from early on and Leicester never allowed City’s vulnerable central defensive duo of Martin Demichelis and Nicolas Otamendi to settle.

They caught the hosts napping as they snaffled their first opportunity with three minutes gone.

A Mahrez free-kick bounced through the area from the right and Huth was the quickest to react six yards out. Demichelis tried to get his body in the way of the German’s flicked shot but succeeded only in diverting it past the helpless Joe Hart.

City were ragged and things could have got considerably worse as they were pulled apart continually in the opening 20 minutes.

Hart needed to be alert to smother an effort from Jamie Vardy and was then quick off his line to deny Danny Drinkwater after another quick counter-attack. Shinji Okazaki also narrowly failed to turn in a dangerous cross from Vardy.

City did offer some brighter moments in attack and they were perhaps just millimetres away from being awarded a penalty as Pablo Zabaleta was ruled to have been fouled by Christian Fuchs just outside the box.

But too often City’s pressure failed to result in chances that threatened Kasper Schmeichel’s goal. Yaya Toure blasted over and David Silva guided an effort wide. When Aguero did find the target, Schmeichel was in the right place.

City needed to find an extra gear but it was Leicester who upped the tempo and they doubled the lead with a brilliant Mahrez goal early in the second half.

The Algeria international picked up the attack after a break by Wes Morgan and skipped over a challenge from Otamendi. He then wrong-footed Demichelis before firing a blistering shot past Hart.

City briefly roused themselves as Schmeichel kept out a powerful header from substitute Fernando but Huth sent the visiting fans into dreamland by heading the Foxes’ third on the hour. The former Chelsea defender rose above Demichelis and Aleksandar Kolarov to head into the top corner from a corner.

That goal killed off all hope of a City revival and Leicester continued to boss the game.

Vardy went close to adding a fourth with a shot that curled just wide.

Aguero did pull one back by heading in a Bersant Celina cross three minutes from time but the game was already up.