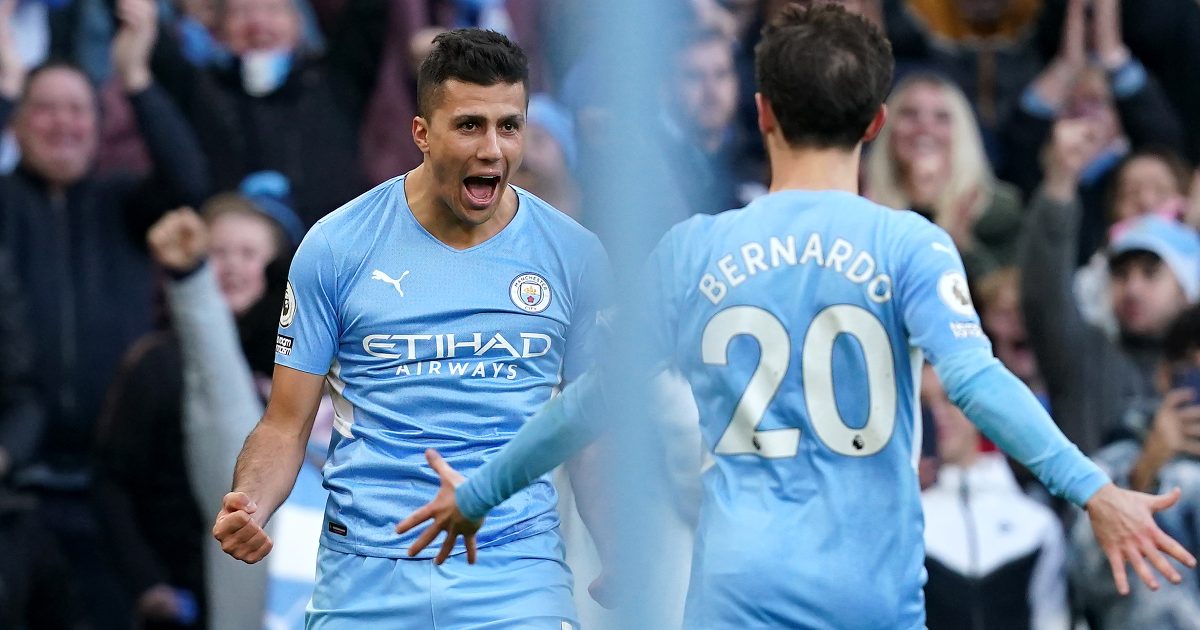 A second half wonder strike from Rodri helped Pep Guardiola’s Man City secure an important three points at the Etihad versus Everton.

Kevin De Bruyne missed the game as he has tested positive for Covid-19. This allowed 19-year-old to make his first Premier League start.

The highly-rated Palmer looked at ease in a fluid and dominant Man City side, for whom Sterling also shone.

The England forward has endured a frustrating start to the season and his future has been the subject of frequent speculation.

The disappointment for him on this occasion that he did not add to his tally, squandering a late chance as City cruised towards the final whistle.

There was some acknowledgement of the main footballing news of the day from across the city, with fans singing “Ole’s on the dole” in reference to Ole Gunnar Solskjaer’s sacking at Manchester United.

There was a far louder chant, however, in tribute to Sergio Aguero, the club’s record goalscorer, following reports the now Barcelona striker is poised to announce his retirement following a heart scare.

There was little on the field to excite the crowd initially as the game got off to a slow start, not helped by numerous stoppages.

One of the interruptions saw Everton lose Demarai Gray to injury in the 17th minute, making the tall order they were facing even tougher.

Even without creating chances, City were dominant in possession and always in control.

It was inevitable opportunities would eventually come their way, and they did so in a glut towards the end of the first half.

Palmer then tested Pickford himself after being allowed to turn and shoot from distance and Sterling also shot at the keeper.

Sterling was awarded a penalty after going down under a challenge from Michael Keane on the edge of the area but referee Stuart Attwell reversed his decision after reviewing the incident on the monitor.

Sterling soon put that frustration behind him as he latched onto a stunning ball into the box from Joao Cancelo, delicately curled with the outside of the boot, to fire City ahead on 44 minutes.

It was the least City deserved against an Everton side that offered little until Andros Townsend won a free-kick in the final minute of the first half, and even that was easily saved by Ederson.

City doubled their lead with Rodri’s stunning strike 10 minutes into the second half, the Spaniard lashing into the top corner from 20 yards following a poor clearance by Allan.

Sterling could have extended the lead 13 minutes from time after Kyle Walker got behind the defence and picked him out unmarked but his first touch was poor and Pickford denied him.

It was left to Silva to wrap up the scoring four minutes from time, tapping in from close range after a Palmer shot was deflected into his path.