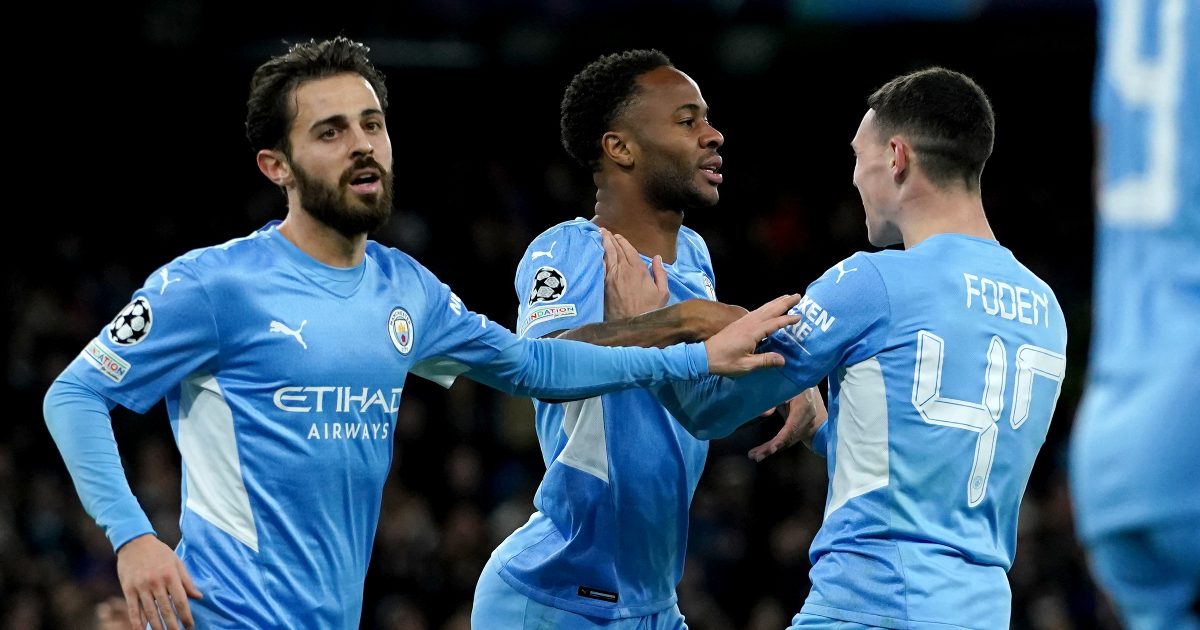 Raheem Sterling added to the host’s advantage in the second half as Man City ran out 4-1 winners against Club Brugge.

Phil Foden put his side ahead early one but an unfortunate John Stones own-goal set up an uncomfortable night for City.

Riyad Mahrez, Sterling and Gabriel Jesus secured victory for Pep Guardiola’s side in the second half though.

The result meant Man City, who reached the final last year, now only need a point from their last two group games to return to the knockout stages.

The evening began on a sour note as Brugge fans – as they had done ahead of the game between the two sides in Belgium a fortnight ago – chose to boo players from both sides taking the knee.

When the action began, City looked keen to put Saturday’s unforeseen loss to Crystal Palace behind them and cement their grip on a top-two spot in the group.

Kevin De Bruyne was unexpectedly named among the substitutes in one of three changes from the weekend loss – perhaps with the weekend’s derby at Manchester United in mind – but City were straight on the front foot.

The hosts controlled most of the possession and Foden and Bernardo Silva both had early chances.

It came as no surprise when City claimed the lead after 15 minutes but, what could not have been predicted was that Brugge would respond almost immediately in what was a dramatic two-minute passage of play.

First Joao Cancelo hit the post with a neat effort and Foden was also denied. City managed to keep the ball alive and they eventually broke through when Cancelo was played through by Mahrez and his cross was tapped in by Foden.

Stung into action, Brugge went straight to the other end and Hans Vanaken forced a fine save from Ederson from the edge of the area. The ball was quickly crossed back in and Silva’s hasty clearance caught Stones in the face and rebounded into his own goal.

That goal, despite being fortuitous in its nature, energised Brugge and Charles De Ketelaere shot at Ederson before only being denied another chance by a fine recovery tackle from Cancelo.

City remained the stronger side, however, and after Ilkay Gundogan went close in the latter stages of the first half, they upped the tempo in the second period.

De Ketelaere threatened again for Brugge but City made their next chance count as Mahrez headed home from a Cancelo cross in the 54th minute.

Gundogan then controlled and shot just over before providing the cross for Sterling, who had already made one dangerous run in his three minutes on the field, to tap in City’s third in the 72nd minute.

The England forward did not celebrate his first goal City goal since August, perhaps out of relief after a difficult spell in and out of the side, but was congratulated by all of his outfield team-mates.

Youngster Cole Palmer looked lively after entering the fray in the final 10 minutes and another substitute, Jesus, completed the scoring with the last kick of the game.