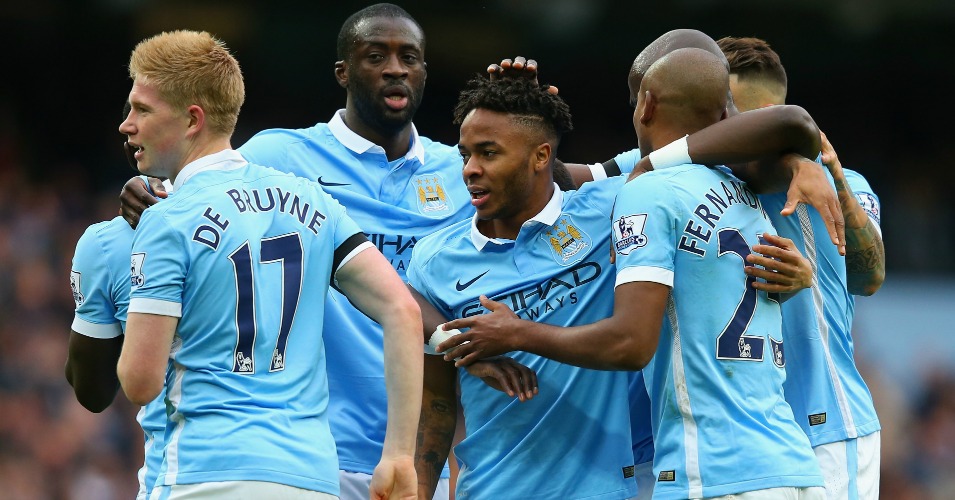 Raheem Sterling scored a first-half hat-trick as Manchester City swept aside Bournemouth 5-1 at the Etihad Stadium.

City had needed someone to step up in the absence of injured star striker Sergio Aguero and £49million man Sterling duly rose to the challenge.

He and Bony both struck inside the opening 11 minutes and the former Liverpool man added two more after a Glenn Murray reply. Bony wrapped up scoring in the closing minutes.

There was a hint of offside about Sterling’s first goal and Bournemouth might have had an early penalty, but Eddie Howe’s side were ultimately overpowered.

The first half was played at a frenetic pace and may have been different had referee Mike Dean pointed to the spot when Dan Gosling went down under a challenge from Nicolas Otamendi.

But City scored from their first serious attack as Fernandinho’s crossfield ball was headed back by Pablo Zabaleta and helped in the direction of Sterling by Bony.

There were suspicions of offside but Sterling swooped to tuck home from three yards.

City soon had a second as Bacary Sagna, playing at left-back because of injuries to Gael Clichy and Aleksandar Kolarov, whipped in a cross that Adam Federici could not hold.

Federici had only been called into the team at the last moment after Artur Boruc was injured in the warm-up and his unexpected opportunity quickly turned sour as Bony snaffled a gift from close range.

City threatened more as Jesus Navas burst clear to tee up Sterling but Andrew Surman produced a fine tackle and Federici then saved from the outstanding Kevin de Bruyne.

Bournemouth replied after 22 minutes when Murray let fly from the edge of the area as the City defence, again lacking authority in Vincent Kompany’s absence, backed off.

Kompany had been left out by manager Manuel Pellegrini, who was unhappy his captain played for Belgium earlier in the week after missing the five previous City games with a calf injury.

But with Sevilla and Manchester United to play in the coming week, it may also have been a sensible precaution and, as City upped their game, that issue became irrelevant.

Sterling made it 3-1 just before the half-hour after being released by a superb through-ball from De Bruyne.

De Bruyne was then denied himself as Federici tipped a shot onto the bar but City still claimed their fourth before the break.

Navas should have taken the honours after racing clear of the defence and rounding Federici but he took too long to shoot and the keeper blocked. Fortunately for City, Sterling was on hand to ram home the rebound.

It marked quite a contrast from Sterling’s last appearance at the ground, when he was substituted in the 6-1 win over Newcastle after an ineffective first-half display.

This time Yaya Toure made way at the interval, for reasons unclear, although he was recently troubled by a hamstring injury. De Bruyne was later given a rest.

Zabaleta forced Federici to save early in the second half and Bony also picked out the keeper. Sterling had two more good chances but first failed to get a shot away and then poked wide.

City then stepped off the gas and eased to a routine three points but Bony was not quite finished and tucked home another in the 89th minute.

Substitute Kelechi Iheanacho wanted to get in on the act but had a last-gasp effort ruled out for offside.