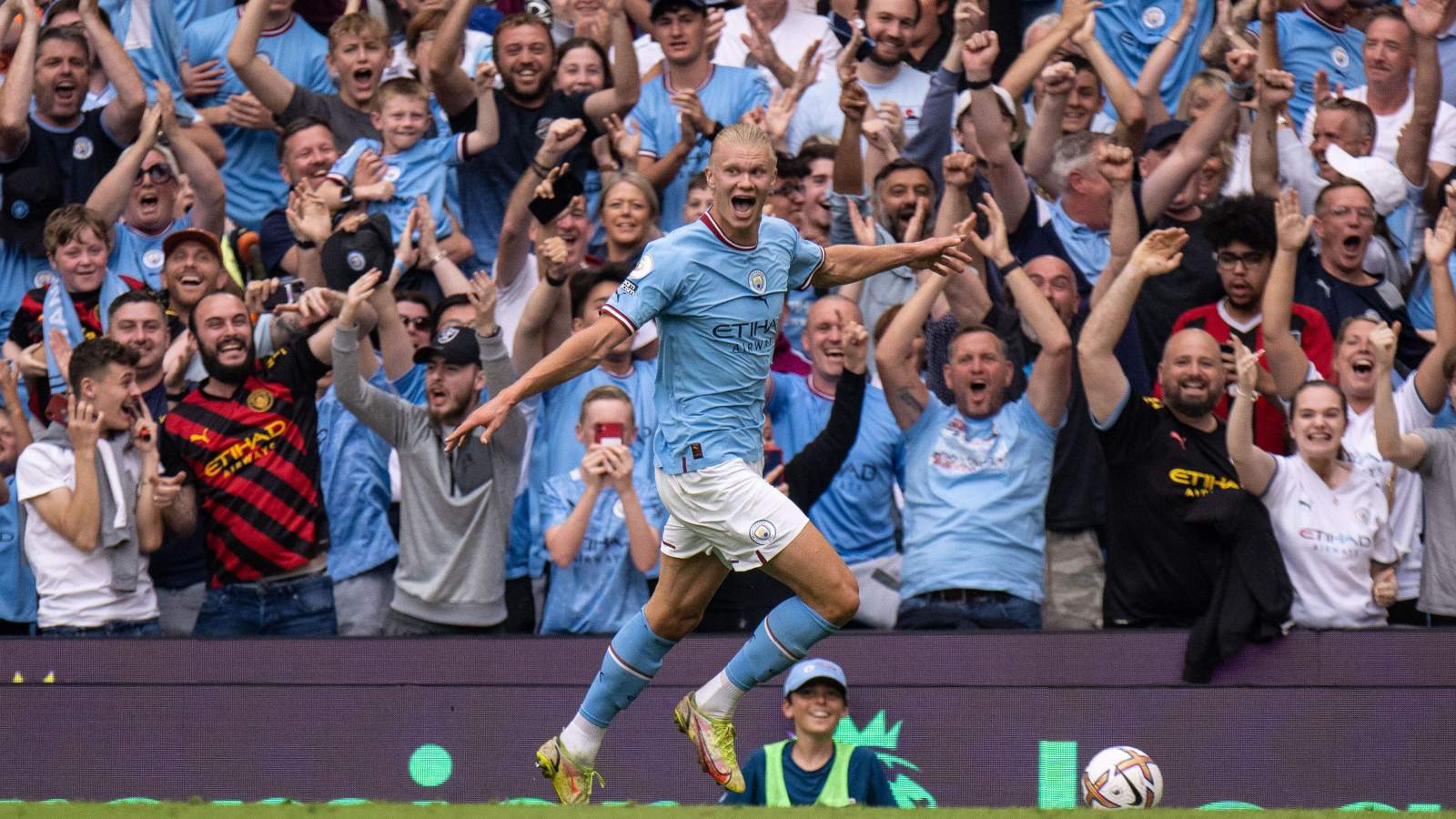 Manchester City and Erling Haaland are breaking Our League. We should be appalled, but we’re absolutely loving every absurd minute of it.

The worst thing that can happen to any league, we’re always told, is for it to become uncompetitive. For one team to acquire such utter dominance that everyone else is beaten before the season even begins. That the destination of the title is a foregone conclusion.

We know this because we’ve even said it ourselves. We’ve all had a good chuckle, haven’t we, about the Scottish League or the German League or the French League where there’s really only one team or sometimes if you’re lucky two who can possibly win the league?

How drab. How boring. Could never be Our League. Not with all its great teams and rivalries and the ferocious intensity of its competition.

So obviously we must be absolutely furious about Manchester City, already comfortably the best team in the Premier League, being handed a great big absurd Norwegian cheat code to ruin the competitive edge of Our League beyond breaking point.

Especially when you combine that with the collapse of Liverpool. That was always going to happen at some point too; you can only defy gravity for so long and Jurgen Klopp and his team had done so on an absurd basis for five years in which absolutely nobody else could even be bothered to try and compete with Pep Guardiola’s side. When you have to constantly sprint just to stand still you are eventually going to burn out.

But here’s the thing. We’re not at all bored by City’s absurd excellence. We’re utterly fascinated and enthralled by it. Even those of us who were in the, ahem, ‘obviously he’s brilliant but will he really make that much difference?’ camp are now long past the cringing embarrassment at our own epic wrongness and just thoroughly enjoying the ride.

Forget everything we’ve ever said about City’s finances, or about how competitiveness is the cornerstone of any enjoyable league. We are absolutely loving the ludicrous results of this insane experiment where we found out precisely what happens when the best team in the league is then given the most astonishing young footballer on earth as well.

Now we’re pretty confident we’re not going to get remotely bored with watching the big blond nonsense score goal after goal after goal for at least a couple of years. Really, the only thing that could bore us, certainly for this season, would be if Haaland becomes vaguely mortal and only ends the season with, say, 40 Premier League goals. That would be hugely underwhelming, but luckily the only way it seems possible for him to end with such a meagre haul would be an injury that keeps him out for half the season. And we’re pretty sure Haaland cannot be injured by conventional methods.

No, he’s going to score 60-odd Premier League goals this season and we’re absolutely here for it.

Now we do accept that this freakery might eventually grow wearisome. You’d never catch us just writing the same piece over and over and over again and expecting people to continue enjoying it.

But luckily we don’t have to worry here, either. Enter Alf-Inge Haaland to reassure everyone that his son is going to be used to ruin all leagues for a few years at a time on a rolling and fair basis. We say fair, but he does appear to have Bayern Munich next on his son’s grand plan, and that really would be quite something to watch. Real Madrid is another obvious next stop, while we will eat our ‘We Were Wrong About What A Farmers League We Are’ hats if he doesn’t end up spending two seasons committing utter daftness in Ligue 1 with PSG at some point or other.

After that, who could even firmly rule out Haaland taking on a slightly different challenge in Our League and trying to elevate one of the dreggy teams like say Liverpool or Chelsea to the top of the pile? What a fairytale that would be – both were mentioned in dispatches by Papa Haaland.

The other good thing about watching City just eviscerate expensively assembled football teams full of elite players is that, while everyone with eyes is entirely certain they are clearly going to win the league by about 15 points, there is the slightly inconvenient and amusing fact they are not actually currently top of the league.

That honour currently belongs to a ferociously good Arsenal side, but that need not trouble us unduly. Indeed, the best Arsenal side for a decade finishing 10 points clear of everyone else but 15 adrift of City is itself a deliciously watchable prospect and something their very online fanbase would take with good grace and in no way generate endless memes about conspiracies and proper grand old clubs who don’t rely on oil money thank you very much, please don’t look at the name of our stadium.

Let’s be entirely real here, the fans are a big part of what makes City enjoyable this season. City, for whatever reason, have still not acquired a full quota of gobby obnoxious ‘glory-hunting’ supporters. They still make far less noise online than your Liverpools or Uniteds or the Arsenals of this world and for the most part neutral fans might not exactly wish City well but can at least on some level acknowledge that the last decade has been the most outrageous cathartic fun if you’re a City fan who endured the agony of watching United dominate for 15 years during which your own team was assorted shades of shite.

We are both mature enough and petty enough to acknowledge that the piss being boiled at Anfield, Old Trafford and elsewhere is clearly part of why we’re enjoying this all so much.

But mainly it’s the sheer otherworldliness of it. We’re already dealing in such absurd numbers. Premier League Golden Boots have been won with 18 goals; Haaland goes past that next week. By the end of this month he’ll probably have already bettered Mo Salah and Son Heung-min’s 23-goal winning mark from last season.

Just how many goals can he and City end up with? Even a goal a game from here takes him to 44, unprecedented Our League numbers yet already that feels so conservative. That’s a dizzying and intoxicating prospect.

And to those who reckon we’ll be bored of the Haaland numberwang soon enough, we say only this. We’re constantly told that new players at Manchester City need a season to get fully up to speed with Pep Guardiola’s ideas and methods, that the first year is spent finding one’s feet and adapting to the game-changing brilliance all around you. It’s only in the second season that you see the finished product.

What if that’s still true of Haaland?