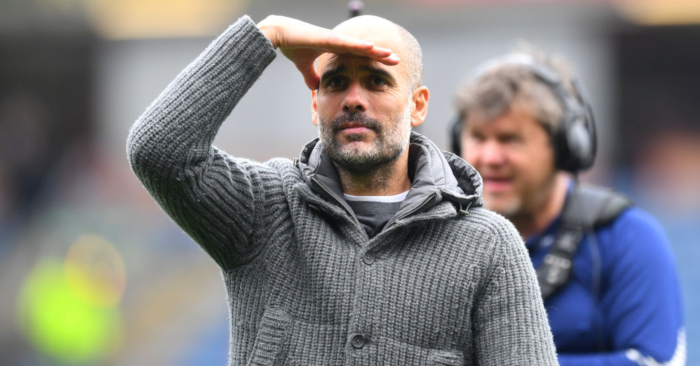 There was an odd beauty to be enjoyed in the directness of the move, simply because it railed against our stereotypes of the fixture. In the first half of Manchester City’s game at Burnley on Sunday afternoon, goalkeeper Ederson played a pass from his own penalty area over every Burnley outfielder to the feet of Sergio Aguero, stood 80 yards away.

Ederson’s pass was accurate to within six inches; only a duff touch stopped Aguero from having a clear shot at goal. Burnley, the perceived kings of directness and pragmatism, had been beaten at their own game. City, the Premier League’s pretty-passing extraordinaires, had humped it long. Sort of.

One of the more intriguing statistics of this Premier League season is that Ederson, that most modern of goalkeepers who is eternally comfortable with ball at feet, has actually registered a lower passing accuracy than last season – 85.3% to 82.7%. He doesn’t even rank first in the league anymore.

But there’s a reason for that. As opposition managers have urged their teams to press higher up the pitch and cut off the supply to City’s central midfield, Ederson has increasingly looked long to counteract the press. According to Opta, he has increased his number of passes that end in the final third by 27%.

Staying at the top is a game of cat and mouse. No sooner has an elite club hit upon a magic solution than their peers are hatching a plan to counteract it. The rise in detailed opposition scouting brings a counter-intuitive conclusion: to stay one step ahead you must constantly change things that worked so well.

Pep Guardiola might consider that to be his forte. ‘He must analyse his opponent and then devise new and better ways of using his resources (players, positions and roles) to achieve optimum results,’ wrote biographer Marti Perarnau in Pep Guardiola: The Evolution. ‘At the end of this process he is left with the final product.’

And so you get Oleksandr Zinchenko as a full-back, Raheem Sterling becoming a six-yard-box poacher and Ederson hitting 80-yard passes to a striker that sail over the heads of Burnley players. Ederson had a tactic last season of chipping the ball over his defenders and into a packed midfield, where Leroy Sane would have moved inside to retain possession and spark an attack. When the opposition has grown to expect short passing, directness becomes the surprise weapon.

Guardiola’s first season was spent persuading Manchester City’s players to learn the exacting demands of his coaching, and it took longer than he might have liked. In 2017/18, we saw the emphatic results of that process. The derision that followed Guardiola’s “I don’t coach tackles” then went a little quiet. What Guardiola actually meant by that comment (made after a 4-2 defeat at Leicester City) was that missed tackles were not the reason City had lost. Do everything with the ball correctly, he reasoned, and no team would cope with them. And he was right.

Now we may be in the second phase of Guardiola at City. Shortly after the death of Johan Cruyff, Guardiola recalled conversations with his great mentor about implementing Total Football in England. Historically, Cruyff had regarded English football as the final frontier for his philosophy to cross. But that had changed.

“We spoke many times about this,” said Guardiola. “In football, the pitch is the same length. We believed we can play the way we want to play in England, in China, everywhere. It’s 11 against 11, the distances are almost the same, so it’s the way the player moves, with the ball, without the ball, that makes the difference.”

Guardiola’s vision of Total Football is actually closer to Rinus Michels’ than Cruyff’s. Cruyff followed a deep desire for aesthetic wonder, whereas Michels and Guardiola are obsessed with the pursuit of glory. But the same principles run like a vein through master and apprentice, master and apprentice and now Guardiola, the new master. “It was about making space, coming into space, and organizing space-like architecture on the football pitch,” said Ajax defender Barry Hulshoff of Michels’ Ajax team. Remind you of anyone?

Michels’ fantasy was that each of his players should be comfortable in any position on the pitch; the greatest change in Guardiola’s City from last season to this is the increased tactical versatility of his squad.

To an extent, necessity has been the mother of Guardiola’s invention. It’s fair to say that Bernardo wouldn’t have played centrally anywhere near as much were it not for De Bruyne’s prolonged absences, and the same is probably true for Laporte and Zinchenko at left-back. But the point on flexibility still rings true. It is also interesting how Guardiola adapts City’s system to match the personnel. They attack in a very different way from full-back depending on whether Zinchenko or Benjamin Mendy play.

What is certainly true it that this level of positional flexibility just wasn’t present last season. In the Premier League, Walker didn’t play in central defence, Stones didn’t play at full-back or in midfield, Laporte only played in central defence and Fernandinho only played in midfield. Fabian Delph was the exception at left-back. De Bruyne, Sterling and the Silvas all had more exact roles in the starting XI.

It is also why Riyad Mahrez has found life tough during his first season under Guardiola. Mahrez has such a defined role – right wing, cutting inside onto his left foot – that his one-dimensional play actually sticks out in a team packed with variety.

Watch City live, and it becomes more obvious still. Central defenders become full-backs when Ederson has the ball, with the defensive midfielder dropping into central defence to receive possession. Sterling drops deep or drifts into the centre to allow full-backs to overlap. Aguero holds up the ball and sees De Bruyne move past him. Bernardo roams almost as he pleases. Zinchenko steps up into central midfield when City invariably have possession.

They are not alone in some of these tactical foibles, but they can claim to be the most positionally fluid team in the Premier League – and perhaps even Europe. Their team sheet has become an analogue representation of City’s shape in a digital world. One diagram cannot possibly do it justice.

None of this comes easy. One of Michels’ first tasks at Ajax was to insist that all the players in his squad signed professional contracts. This was not done – at least not solely – to provide greater financial reward to players, but to allow him to demand more from them. Any player who did not meet Michels’ standards would be moved on, with the manager having the excuse that they were not justifying their wage.

Guardiola requires the same total commitment to his vision, and he is an unashamed perfectionist. After his Bayern Munich team beat Arsenal 5-1 in 2015, he spent his post-match interview bemoaning his side for not dominating the ball enough (they had 69% possession) and criticising them for allowing too many counter attacks.

Speaking to Bernardo and new signing Ante Palaversa this season, both stressed that they believe it was their character as much as skill level that attracted Guardiola. His players must be sponges, open to learning and adapting their game without the performance level dropping. It is no wonder that Philipp Lahm, one of the players who famously became so versatile under Guardiola, was described by him as “the most intelligent player I have ever coached”.

If City took a full season to settle into Guardiola’s management before trampling over opponents in 2017/18, it isn’t outrageous to think that the same two-year cycle might now be in play. Ederson’s passing range will improve further (you suspect he could already hold his own in central midfield). The younger attacking midfielders (De Bruyne, Bernardo Silva, Sterling) will chop and change positions more to leave defences grasping at space. The defensive shape will increasingly shift when City gain and lose possession. All are processes to create space. Space creates time. Time creates danger. Danger creates goals.

With Txiki Begiristain and Guardiola – two members of Cruyff’s Dream Team – in tandem, Total Football (or Guardiola’s version of it) was always the potential endgame for Manchester City. Get it right, and one of the best Premier League teams in history might just get better still.