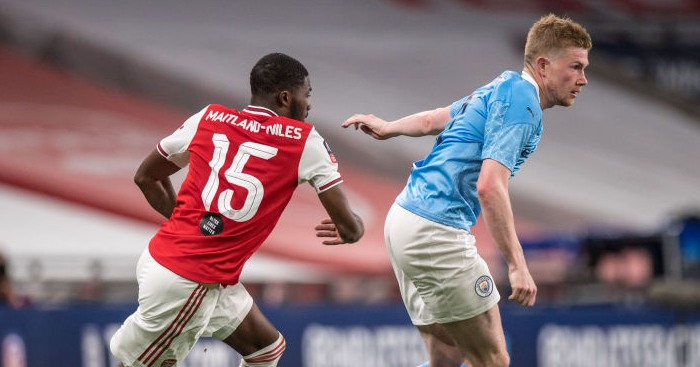 The most important tactical feature of Mikel Arteta’s approach to ‘Big Six’ clashes – and the one most frequently misunderstood – is the desire to play a high-risk short-passing game out from the back, with particular emphasis on goal-kicks. Many supporters and pundits are alarmed by seeing the depth of these triangles as opponents hound them down fewer than 20 yards from goal – but it’s all part of the master plan.

The opener against Liverpool was the perfect example of what Arteta is trying to do. By taking such a risk Arsenal lured Liverpool forward, and after evading the first wave of pressure suddenly half the pitch was wide open. Arteta’s side had created a counter-attacking scenario from their own goal-kick, with Pierre-Emerick Aubameyang and Alexandre Lacazette exchanging passes, sprinting towards the penalty box, and forcing an error from a frantically retreating Andrew Robertson.

😲 The left-back last committed an error directly leading to an opposition goal in the Premier League in January 2015, for Hull against Newcastle pic.twitter.com/LAzPY4oczJ

Manchester City are vulnerable to something similar occurring on Saturday, not least because Pep Guardiola is struggling to get his side to press with intensity, as shown in Leicester City’s 5-2 win. With the Man City defenders dropping back and the midfielders pressing sporadically, a huge gap opened between the lines for Harvey Barnes to get on the ball and feed Jamie Vardy.

A lacklustre, half-hearted attempt to intercept Arsenal’s possession should allow the visitors to build around it and attack a nervy, backpedalling defence.

2) How will Dias cope with Aubameyang?

If this tactic is successful, then the game’s most intriguing head-to-head is between City’s new centre-back Ruben Dias and Aubameyang. The 23-year-old Portugal international already looks a clear upgrade on Eric Garcia, and yet there is often a period of acclimatisation needed for centre-backs new to the Premier League – especially when they have to bare such a heavy load.

It is getting easier and easier to make the City back four look wobbly, which is almost entirely the fault of poor pressing from midfield and a high defensive line. Dias, then, is in for a difficult game, particularly because he will be tasked with tracking the diagonal runs of Aubameyang as he cuts in from the left wing.

With nobody for Dias to mark, with Aymeric Laporte distracted by Lacazette, and with Kyle Walker going walkabout, Dias could get caught flat-footed by Aubameyang’s movement once Arsenal’s defenders have found a way to pass around the Man City pressure.

Arsenal’s deep passing game should stretch the pitch quite a lot, and coupled with a relatively aggressive press from the visitors means this is highly likely to be another maddening free-for-all with goals flying in at both ends.

In Arsenal’s 2-0 victory over Man City in the FA Cup semi-final in July, Arteta was surprisingly bold in hitting the City midfielders as soon as they got on the ball. The plan was to leave the centre-backs alone but snap into challenges as soon as City progressed into the midfield line, with Granit Xhaka in particular haring out of his base position to shut down Kevin de Bruyne as he dropped to take control of the game.

On that occasion, it worked well for Arsenal as they managed to disrupt City’s rhythm and take the sting out of the game. But at the Etihad, and in this most absurd of seasons, it’s more likely that it will simply create even more space vertically.

Finally Man City have a striker again. For two consecutive Premier League weekends Guardiola has been forced to utilise a false nine, first picking Raheem Sterling in the defeat against Leicester and then inexplicably playing Riyad Mahrez in the role against Leeds United; Sterling had done a pretty decent job, but Mahrez looked lost.

Mahrez as a false 9 (a role he’s rarely played before) rather than Sterling as a striker (where he excelled vs Burnley in mid-week) was baffling from Pep. Mahrez really struggled with finding the right spaces in that position.

In both instances, it resulted in City playing almost exclusively in front of the opposition defence, with nobody making runs that could stretch the play or pull the centre-backs around. In fact, this has been a problem for City on multiple occasions over the last 12 months, primarily as a result of losing Leroy Sane – an under-rated piece of the jigsaw whose movements either gave David Silva a through ball or pulled defenders away, creating space for Sterling and De Bruyne.

At least with Gabriel Jesus leading the line on Saturday there will be a target for City’s playmakers. David Luiz always has a mistake in him, of course, plus Arsenal’s high-risk passing will probably hand City at least one chance of dispossession. With Jesus making runs, City are less likely to waste that opportunity.

It is difficult to really pick out City’s attacking style at the moment. Everything is a bit flat, a bit uneven, with moments of improvisation more crucial to scoring goals than Guardiola would like. For clues about where they can hurt Arsenal this weekend, our best bet is to look at how Liverpool managed to poke holes in the back four at the end of September.

The first two Liverpool goals were built down Arsenal’s left, resulting from poor defending from Kieran Tierney – he might miss this game as he self-isolates – and the space that tends to open on this side of the pitch because of Aubameyang’s lack of defensive work. Liverpool’s crosses from this side repeatedly found a spare man at the back post because Hector Bellerin was distracted by Sadio Mane.

De Bruyne, naturally dropping to the right wing to cross the ball, is City’s main weapon on that side, and since Raheem Sterling is good at arriving at the back post, Arsenal need to be wary of this combination.