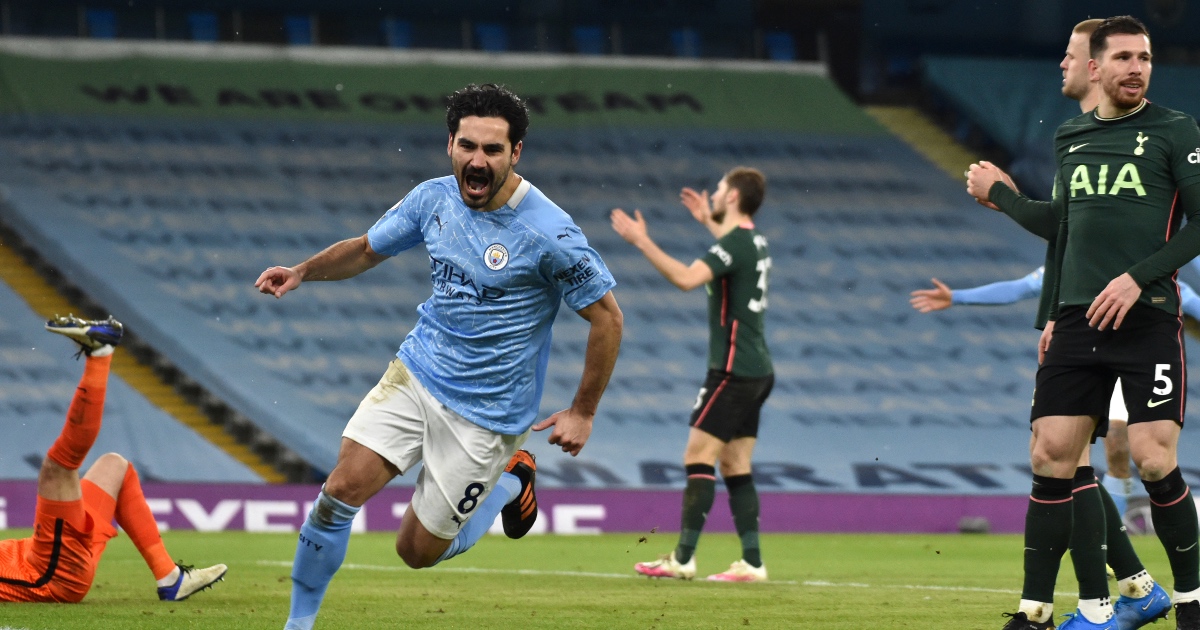 The in-form German, fresh from being named as the player of the month for January, took his goal tally for the season to 13 as he added to Rodri’s 23rd-minute penalty at the Etihad Stadium.

Gundogan was also responsible for winning the spot-kick in another outstanding display but his evening ended prematurely as he went off injured soon after his superbly taken second goal, from an Ederson pass, on 66 minutes.

The win extended Man City’s lead at the top of the table to seven points and their overall unbeaten run in all competitions – since losing to Spurs in November – to 23 games. Their 16-match winning run, again in all competitions, is a record for an English top-flight side.

They showed their intent early with Gabriel Jesus having two shots blocked in quick succession but Tottenham did not intend to sit deep as Tanguy Ndombele made a driving run into the hosts’ box.

Spurs went close to taking the lead when Harry Kane hit the frame of the goal from a free-kick in the 14th minute. The England captain had worryingly clutched his angle after being fouled by Aymeric Laporte but he was soon on his feet and unlucky to see his curling effort strike the top of a post.

Man City made the most of that reprieve to hit the front themselves after Gundogan was brought down in the area by Pierre-Emile Hojbjerg.

A week ago Gundogan had been the designated penalty-taker himself but, after missing against Liverpool, this time he deferred to Rodri.

It looked at one point as though goalkeeper Ederson was interested in taking it as the Brazilian wandered up to the halfway line but – despite speculation he may one day get the job – his turn will have to wait. Hugo Lloris almost got a hand to it, but Rodri’s low shot found the bottom corner.

The game became niggly for a period and Jesus got involved in a running battle with Erik Lamela. Spurs boss Jose Mourinho reacted furiously when the Brazilian won what he considered a cheap free-kick at the Argentinian.

Yet Man City continued to pose the bigger danger and they went close again when Gundogan had a shot blocked after a good run by Raheem Sterling and Jesus hit the bar with his follow-up attempt.

Gundogan got his reward early in the second half. He put City in firm control with his first on 50 minutes after another good run by Sterling, who cut all the way through the box from the right. Gundogan took over to finish tidily with an instinctive strike inside the near post, although Lloris was beaten too easily.

Gundogan’s best was still to come with his second just after the hour. Ederson picked him out in space with a long ball over the top and Gundogan’s control was so assured that that Davinson Sanchez was completely wrongfooted and collapsed in a heap. With space to shoot, Gundogan slipped the ball past Lloris.

The downside was that Gundogan appeared to tweak a groin muscle soon afterwards and he was promptly removed.

Mourinho turned to Dele Alli, for his first Premier League appearance in two months, and Gareth Bale, after a week of uncertainty and speculation over his fitness, but the outcome was not in doubt.

Bale did show a flash of what he can do however, with a jinking run into the box but Ederson parried his strike.

Sergio Aguero was unexpectedly among City’s substitutes after recovering from Covid-19 but the club’s record goalscorer was not required on this occasion.