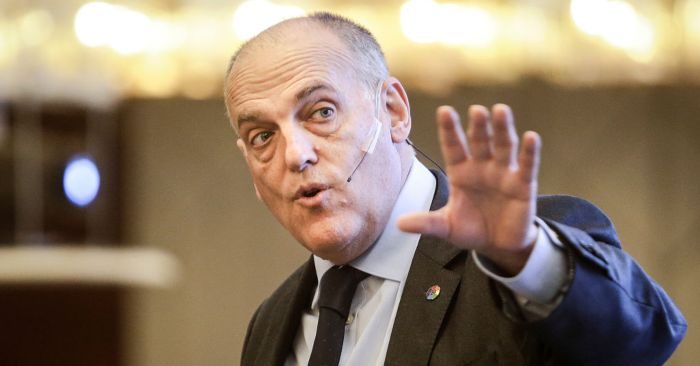 Javier Tebas has continued his feud with Manchester City, suggesting they “present a danger that football has not seen before”.

La Liga president Tebas has been a vocal critic of City in the past, stating in 2017 that “they have invented fictitious, state-linked sponsors with amounts that do not match market prices”.

He denied that his condemnation of the club had any racial undertones earlier this year.

And with the club still under a UEFA investigation over alleged financial violations, Tebas says they are one of a handful of sides that represent a threat to the game in its current state.

“The governors of European football need to show a much stronger commitment to healthy domestic football,” Tebas told the Totally Football Show.

“This would include stricter financial controls that limit state clubs like Manchester City or PSG from vastly outspending their rivals and it would also include much firmer Financial Fair Play penalties, which have been a very weak deterrent up to this point.

“Barcelona and Real Madrid have never received state support and have always been run in a financially responsible way.

“Big clubs have always existed across Europe and it is true they can create distortion if there are no financial controls in place. In the case of Spain, we have spent the past years reducing levels of debt to historic lows and we do not want our biggest clubs to have more money if others do not.

“However, the state clubs are a new phenomenon and present a danger that football has not seen before. They are operating entirely outside of the rules and risk inflating markets to disastrous levels through their financial doping.”

Just the four Spanish teams in this, little City down in 10th. But we ruin football don’t we? pic.twitter.com/2UgLyXbsCq

Tebas recently suggested that UEFA and the European Club Association’s proposed restructuring of the Champions League – including gated promotion and relegation – would be “an absolute failure because it is a coalition divided between the rich and the poor”.

Asked what reforms he would introduce instead, Tebas replied: “The competition does not need immediate reform. Certainly not in the structural ways that have been proposed.

“The model we have right now has proved successful while domestic leagues have continued to grow. The problem of European football is one of competitiveness and cannot be solved with format changes.

“Also, before speaking about format, we should talk about economic distribution: how much does UEFA expect to collect and how will it distribute that money? European Leagues has put forward an interesting proposal for improving revenue distribution among smaller leagues, which I hope UEFA will consider.

“The European Club Association is an organisation that serves only the largest clubs of the football pyramid and their reforms would help these clubs syphon more funds from domestic competitions to serve their own growth.

“The argument that reforms are needed to help support smaller leagues is nonsense. How does giving Ajax protected Champions League status help the Dutch league? It only helps Ajax, while increasing the gap between them and the rest of their national league.

“The proposals exist in their current form because a small number of elite clubs want them to happen. The football community cannot stand by while its future is being played with. Even a watered-down, negotiated version of these plans would be equally damaging to the future of domestic football.

“We have significantly reduced the gap between Spanish clubs. Before we centralised broadcasting rights the ratio from biggest to smallest club was 13:1. Now the maximum is 3.5:1. We require all clubs to work within clear financial limits and we distribute TV money fairly, because this makes the competition better for everyone. When it comes to UEFA and ECA’s proposals we will continue to challenge the elite clubs, Spanish or otherwise, to remind them of the responsibility they have to protect domestic football.

“European qualification should be via domestic league position. If you introduce other means of qualification, you are instantly devaluing domestic competitions and the long-term effects of this are very destabilising and dangerous. In all reform discussions we must keep in mind the needs of all clubs, not an isolated few.”