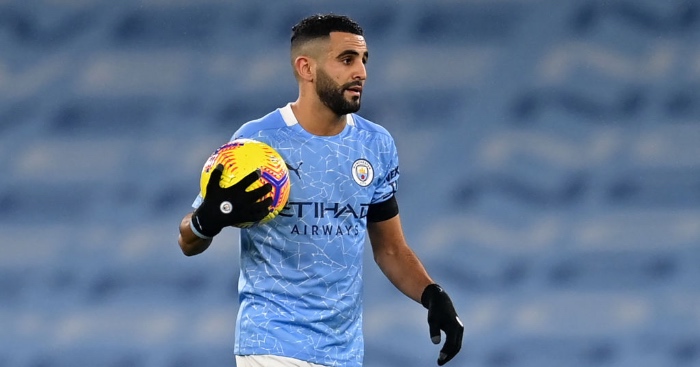 Riyad Mahrez grabbed a hat-trick as Man City roared back into goalscoring form with a 5-0 win over Burnley.

Benjamin Mendy, with his first for the club, and Ferran Torres also registered in Saturday’s rout at the Etihad Stadium.

It could even have been worse for the Clarets but a late own goal by stand-in goalkeeper Bailey Peacock-Farrell and an earlier header from Torres were disallowed while Kevin De Bruyne hit the post.

MAILBOX: Sorting the greatest footballers of all time into tiers

It was Burnley’s fourth successive 5-0 loss at this venue.

Man City have lacked their usual cutting edge in front of goal this season, not helped by Sergio Aguero’s injury problems. The Argentinian was again absent following what manager Pep Guardiola described as “a little disturbance in his knee” but, on this particular occasion, he was not missed.

Man City had only scored 10 goals in their opening eight Premier League games but, if they could have chosen any opponent to face after criticism of their lack of potency, it was Burnley.

It was certainly a chastening experience for Northern Ireland keeper Peacock-Farrell, who was handed his Premier League debut in the absence of Nick Pope.

He was picking the ball out of the net within six minutes after James Tarkowski gave away possession and City swept upfield. De Bruyne fed Mahrez in the area and the Algerian took a touch before bending in a fine low shot.

Kyle Walker fired over before Mahrez doubled the lead on 22 minutes. Quick-thinking Walker found him in space in the area with a quickly-taken throw-in and he took full advantage by dancing around Ben Mee and Tarkowski and firing in another curling shot off the post.

Peacock-Farrell recovered to palm over after De Bruyne spotted him off his line but he was almost left red-faced after a looping header from Torres hit the post and bounced in off him. Fortunately for the keeper, a flag was raised.

City did make it three five minutes before the interval. Again De Bruyne was the provider, picking out Mendy with a deep cross to the far post. The Frenchman buried a low volley across goal.

The one-way traffic continued after the break and De Bruyne went close after cutting in from the right.

The only surprise was City had to wait until the 66th minute to register their fourth. Torres claimed it from close range, tucking away his fifth for the club – but first in the Premier League – from a Gabriel Jesus lay-off after a surging run by Walker.

The fifth came moments later, Mahrez completing his first treble since netting three for Leicester against Swansea five years ago as he raced in to head home a cross from substitute Phil Foden.

City then thought they had another as Peacock-Farrell fumbled the ball into his own net after stopping a Jesus shot but VAR ruled the Brazilian was fractionally offside.

De Bruyne also went close as he thumped a shot against the post in injury time.