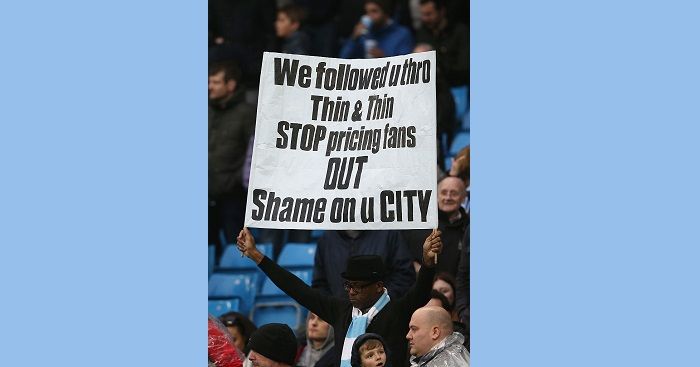 Manchester City, a club with annual revenue of more than £500m and the richest owner in world football, have once again raised ticket prices ahead of the 2019/20 season. Most incredibly, they did not feel the need to tell fans what the rises were before opening the renewal window, expecting people to blindly oblige.

This discouraging assumption of servility is mainly due to the section of our own fanbase exemplified by the most popular fan group, as reported by the Manchester Evening News and laid out in Mediawatch last week. Against all evidence provided by even a cursory glance at Twitter, the idea that the supporters were mostly fine to pay more and not at all angry was instantly pushed out there as gospel. The group later clarified that they wanted a freeze, but that is a weak stance when they seem to have done no campaigning in favour of that, using the rest of their statement to justify the increases.

City rely on this attitude and it is why they didn’t mention or try to explain the rises – they know they’re unjustifiable, but a certain section of the fanbase will do their policing for them anyway, and the PR team can go on holiday early. They also know there won’t be a mass boycott for the same reason, so up and up the prices will continue to go.

The explanation for how this happened is half a City fan issue and half a wider issue concerning the lack of supporter solidarity in football as a whole. But before we get to that let’s demonstrate the problem with some real-life reasons put forward for why we shouldn’t kick up a fuss, and why those reasons are silly:

Looked at the other way, does anyone believe City will lower the prices if the team takes Man United’s spot in 6th next season? Will we get a reduction if only two trophies are forthcoming in 2019/20? If not, why not?

If quality correlated with price, City would still owe us all money for the ’90s. Where’s our rebate for the Alan Ball years, Sheikh Mansour?

It’s not just 3% in isolation, and you don’t have to look very hard to find stories of prices going up 100% in less than a decade – a period during which wages have stagnated, and the club’s East Manchester heartland remains one of the poorest areas in the country.

“It’s only a pound extra a game” can only apply for people heading into their second year of having a season card. Anyone else using this argument is being wilfully blind and forgetful. Or selfish; 3% might not mean a lot to some people, but not everyone is so far away from the breadline, and poorer City fans are just as worthy of this team as richer ones.

“Stop complaining, the club have FFP to deal with!”

Deary me. City are indeed dealing with “off-the-pitch issues” that we are all aware of. What is less obvious is why fans paying more would assist with this. Shall we have a half-time whip-round to help cover legal costs?

City are a massive international corporation. The FFP stuff is not being dealt with by one man and a photocopier. The idea that loyalty should be demonstrated by paying more is concerning.

For the final word on this we go to City fan @burnagedaydream:

Need to be charged more to meet rules we apparently haven’t broken.

That awful example of marketing speak/PR statement/corporate sales pitch comes directly from the fan group, if you can believe it. Does it even need stating why this is so stupid?

It’ll be a squeeze next season when 50,000 people have all moved to the cheapest seats, but at least we will all have grabbed a bargain. I see no problems here.

As mentioned towards the beginning of this article, the cause of this confusing, somewhat nauseating acceptance of annual ticket-price increases seems to have two aspects.

The first is a City thing. It sounds pitiful, but being a City fan can be hard. The worst period in our history is within living memory and can be compared directly with what is turning out to be the very best. Present happiness is achieved in the shadow of past pain which feels like it only happened yesterday, and it is all too easy to become overprotective and defensive. The club leverages our memories and the unspoken fear that the good times might go away again for its own benefit. The psyche of the City fanbase can be a dark place, and the club is a cynical, money-making organisation (like all top modern clubs) which uses our fears and worst impulses for its own gain. Capitalism 101.

On top of that it is easy to feel constantly under siege from the outside. Seemingly endless opinion columns and a constant barrage of nonsense on social media makes many City fans feel as if they are being blamed for things they have no connection to. Human rights abuses, the greater corruption of the football world – all the greatest hits. We’re not in a position to explain these things or carry responsibility for them, as illustrated by David Mooney in these pages. But I don’t think it’s a surprise that many City fans have gone so far the other way in response, and that’s more than understandable.

The second cause, which I would argue is the most important, is the wider lack of solidarity among football fans. The most obvious and relevant example is the exponential growth of #Emptihad shouts on Twitter. If a cup game has empty sections, could it be that people can’t justify the additional cost of following the club in four competitions? No, it’s because City’s fanbase is sh*t – the same fanbase who followed the club around Division 2 and set records every week. It makes no sense, but it is a great opportunity for banter. In response, the idea that we have to support the club no matter what it does has taken root.

And that’s just one example. Fans everywhere are ridiculed for not singing loudly enough, not having enough scarves held over heads, not having enough people attend parades, not doing the right chants, doing chants which aren’t original enough, waving the wrong type of flags, not having any flags, and so on.

Capitalism demands that we are divided so that we can be ruled. Football has become so tribal that the international companies we call clubs barely have to try anymore. Are you being mocked on Twitter? No problem! Simply defend everything the club does to your dying breath to show that you’re a real fan. Prove that the FIFA 19-obsessed teenager laughing at you on the internet is the stupid one!

The bottom line is that we are all in the same boat and will all be priced out one day if current trends continue. Clubs announce single-season price freezes and expect praise for not further exploiting working-class communities for a single 12-month period. What is more amazing is that they actually receive this praise.

How can we combat it? By sticking together.

Solidarity within fanbases; protesting pointless price rises and taking a stand when clubs sacrifice our interests on the altar of profit. No matter who you support, your fanbase was there before your current owners and they’ll still be there long after them. When weighing up whether to support a club exploiting the fans, we absolutely, unequivocally must choose our fellow fans every single time, even if that leads to boycotts and walk-outs. If we don’t, nothing will ever change. Not for the better, anyway.

Solidarity without fanbases; supporting and joining fans of other teams when they protest or complain rather than mocking them. We know this can work. When everyone got together to demand a cap on the price of away tickets, they caved. But when it comes to home tickets we cannot get past tribalism, and so we will continue to get rinsed year in, year out. We have a lot more in common than not.

As with so much else in modern football, Manchester City are something of a canary in the coal mine. Television money continues to increase, but still the fan is asked to pay more for the same product. It’s happening to us now and it will more than likely happen to you at some point in the future. As fans we need to stick together because there is absolutely no one else out there fighting on our behalf.