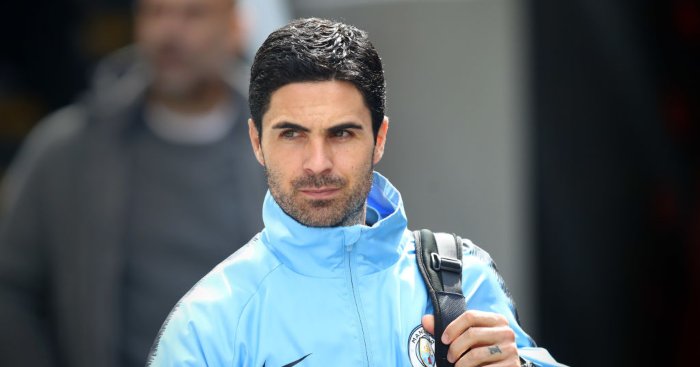 Manchester City are unhappy with the way Arsenal have dealt with their interest in Mikel Arteta, according to a report.

Pep Guardiola branded Arteta “a incredible person”, as the former Gunners captain closes in on a return to Arsenal.

Arteta is expected to land the job at the Emirates, where he spent five seasons as a player, after Emery was sacked at the end of last month.

Managing director Vinai Venkatesham and club lawyer Huss Fahmy spent two-and-a-half hours in discussions with the Man City assistant at his house earlier this week, and it appears a matter of time before he takes charge.

Arteta was in the City dugout on Wednesday night as the Carabao Cup holders saw off Oxford United in the quarter-finals to seal a two-legged semi against arch rivals Manchester United.

And the Daily Mirror claims that City are ‘furious’ with there yet ‘to be any official contact’ from the Gunners for Arteta.

It is understood that ‘City are increasingly exasperated by the lack of communication’ from Arsenal with one club insider calling their handling of the situation as ‘shambolic’.

Another source told the Daily Mirror: “it’s surprising to hear that plans are being made by Arsenal to unveil our coach as their Head Coach on Friday on the basis that no contact has been made by the Club to discuss this matter.”