Home All The News City keeper: ‘Anything we’ve done doesn’t matter until we win’

"We haven't won anything so far," says Claudio Bravo, who also discusses his personal predicament... 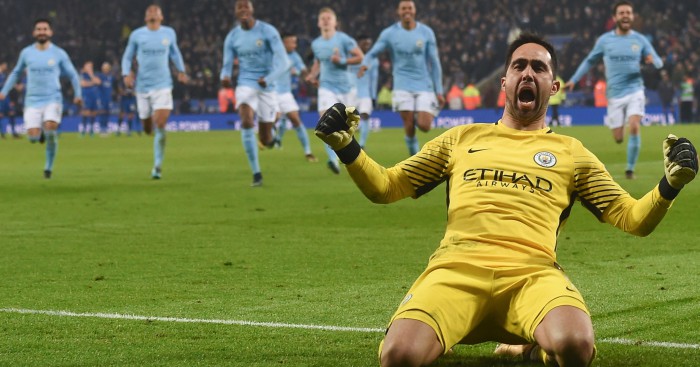 Goalkeeper Claudio Bravo insists Manchester City’s recent achievements mean nothing in their quest for the quadruple.

The 34-year-old was City’s hero at Leicester on Tuesday as they reached the semi-finals of the Carabao Cup 4-3 on penalties.

He saved Riyad Mahrez’s spot kick after Jamie Vardy hit the post following a 1-1 draw after extra time at the King Power Stadium.

City are 11 points clear at the top of the Premier League, having won a record 16 straight games, and can also still win the Champions League and FA Cup but Bravo is urging acution.

“We haven’t won anything so far, we haven’t lifted any trophy so anything we’ve done doesn’t matter until we win. We must stay calm, keep working hard,” he said.

“We must believe it will come but I don’t think we should look that far away, keep it step by step, game by game and competition to competition and at the end of the year the goals will arrive.

“The most important thing is being consistent, working hard day in, day out and keep focusing every game and keep beating records. It’s important to be strong every time you play and that helps you achieve your ambition.”

Vardy denied City victory in normal time with an injury-time penalty after Bernardo Silva’s second goal of the season looked to have given the visitors the win.

Tuesday’s game was just Bravo’s fourth appearance of the season after the £32.6million summer signing of Ederson from Benfica.

He has played in all three of City’s Carabao Cup games so far this term and saved two penalties in a shoot-out win against Wolves in the last round.

Bravo also lost his place to Willy Caballero last season following several high profile errors after a £15.4million switch from Barcelona but insists being on the bench has not changed him.

“You have to be professional, work hard, get ready, don’t relax and always be ready for the manager,” said the Chile international.

“I’m really happy, the team is doing great. Even if I compete or not we enjoy everything. It’s a lot of hard team work and you must work hard and be ready to play when situations like today happen. It’s all of us, we need to keep working and have the chance to play.”