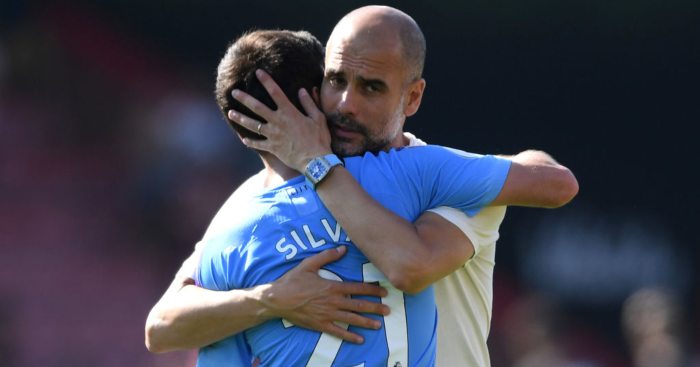 Manchester City are likely to be without David Silva for next Sunday’s crunch clash with Liverpool.

Silva did not return for the second half at the Etihad Stadium after sustaining the problem in the latter stages of the first period.

Guardiola said: “David Silva was injured. Five minutes before the first half ended he told me he had a muscular problem.

That would rule out the 33-year-old, who is in his final season at City, until after the international break.

City travel to Italy to face Atalanta in the Champions League in midweek before travelling to Anfield on November 10.

Guardiola’s side trail the Reds by six points heading into that game.

Liverpool have not been beaten in the league since their loss at the Etihad last January and their last home defeat came in April 2017. They have dropped just two points this term.

It is undoubtedly a key fixture in the title race but, with so much of the season remaining, Guardiola does not see it as must-win.

Guardiola said: “We are going to try but I don’t think so. How many centuries and they don’t lose at Anfield? We will see.

“Now we go to Italy and when we come back we go to Anfield. Many things are going to happen and there are a lot of games to play.”

Wednesday’s game at the San Siro in Milan could be viewed as a distraction with City already five points clear at the top of Group C.

But victory would secure a place in the knockout stages and Guardiola has no intention of easing up or selecting his side with next weekend in mind.

The Spaniard said: “Do you think we can prioritise four titles in one season if we prioritise games?

“We’re going to play with the best team possible to win at Atalanta and after we go to Anfield. The best way to go to Anfield is to play a good game against Atalanta, who have been fighting with the top clubs in Italy for the last two or three seasons.”