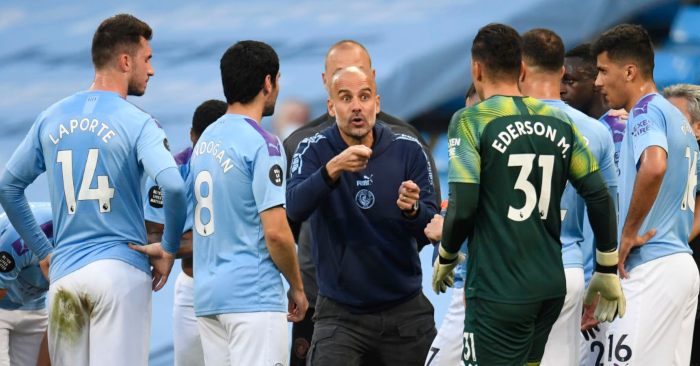 Rahvelation
In November, Raheem Sterling attacked Joe Gomez in the canteen on England duty. He was undoubtedly the aggressor, reportedly shouting “you’re the big man now are you?” while trying to grab him around the neck. He was dropped by Gareth Southgate for England’s next game as a punishment and then issued an apology in which he said: “It’s done, we move forward and not make this bigger than it is.”

Eight months later, The Sun‘s back page proclaims ‘RAHVENGE’ and says that ‘Sterling makes Gomez pay for canteen scrap’. Hmmm. Not sure a man needs to make another man ‘pay’ for being attacked by him eight months ago.

Here’s an absolutely mental idea: Concentrate on the game. It was 4-0 and pretty damned interesting.

Recency bias
On the inside pages, Martin Blackburn begins his ‘big-match verdict’ thus:

Now we know that tabloid newspapers like to reduce everything to ‘just days’ or ‘just weeks’ ago, but ‘recently’? Really?

The defensive myth
Over at the Daily Mail, Martin Samuel is on a mission to ensure that Manchester City know the size of the task they are facing. Which is handy because Pep Guardiola and his Manchester City side probably thought they were now going to overhaul Liverpool purely on the strength of that one game.

‘So, 20 points. How to close that gap? And this is where the difficulty lies because City can do it – but only if they learn to knuckle down and defend.’

Firstly, there is a massive assumption there that Liverpool will produce the same kind of ridiculous season again. They have done it twice – though they may yet to reach last season’s haul of 97 points – but a third would be extraordinary. Certainly, City could only pull off two campaigns at that pace. So let’s not assume City have to somehow come up with 20 more points. Or ‘seven more wins’ as Samuel puts it.

‘The reason they have shipped so many points is that they concede goals. Lots of goals. More goals than Leicester, Manchester United and Sheffield United. More goals than any team in the top seven, bar Chelsea and Wolves. Just four fewer goals than Crystal Palace, who are 12th.’

Which is a hell of a long way round to say that City have conceded just over one goal a game this season (33), which makes them defensively more fragile than Liverpool but very similar to Leicester (31), Manchester United (31) and Sheffield United (32).

If only there was a recent campaign when City conceded just over a goal a game so we can see how they might react. As luck would have it, there’s 2016/17, when City conceded 39 goals and picked up 78 points, which is likely to be very similar to this season. The next season? 27 goals conceded and 100 points. So history suggests that they might just be okay.

‘So, it can be done. That is the point. Just as Liverpool once trailed City by what seemed an ocean, so City can make up this ground. Yet there has to be an acceptance that the game is more than beauty. That defence matters, that defenders matter.’

Well, they literally won the title last season having conceded just 23 goals, so this idea that they simply don’t value defending is frankly bizarre. And this is the club that spent over £150m on three defenders in one season. We think they might have spotted that defenders matter, Martin.

‘He was unlucky with Aymeric Laporte’s injuries, but one player is not a defence. Virgil van Dijk is surrounded by outstanding colleagues, at the back and guarding midfield. Only if Guardiola recognise their failings this season will they even present the main challenge to Liverpool next season. Change, or it is not even accepted they can be that.’

We are pretty sure that Guardiola recognises their failings; he has won quite a few pots as a manager. Not sure he has to ‘change’ now.

As for Laporte, it is worth noting that City have only lost once this season with him in the team – and the Chelsea winner was scored after he left the pitch. Oh and first-choice left-back Benjamin Mendy has started only half their Premier League games this season.

There’s no doubt that City made a mistake in not replacing Vincent Kompany but the idea that they are a defensive car crash that needs a total re-set is a nonsense.

Oh and just after they have beaten the champions 4-0 is absolutely not the time for said nonsense.

Late Jude
SportBild called it as early as March; ESPN told us in June that ‘Borussia Dortmund have won the race to sign Manchester United target Jude Bellingham’; so of course Charlie Wyett has claimed an ‘exclusive’ on the back page of The Sun in July that ‘Borussia Dortmund believe they have beaten Manchester United in the race to land Jude Bellingham’.

Slaughterhouse-Two
‘Mikel Arteta set to make ‘centre-back cull’ at Arsenal ahead of next season’ is a very tantalising headline on the Daily Star website. So tantalising, in fact, that we suspected it was a big old pile of bollocks.

The dictionary definition of ‘cull’ is ‘reduce the population of (a wild animal) by selective slaughter’, so we are expecting a bloodbath here. What we get is the suggestion that Shkodran Mustafi (basically for sale for two years) and Konstantinos Mavropanos (on loan at Nurnberg) might be sold this summer.

And how did they come to this conclusion? From literally one line in The Times that said: ‘Arteta is expected to sell some of his seven centre backs as well as Sead Kolasinac, the left back.’

You probably could bring your daughter to this particular slaughter.

Except it doesn’t; the report ‘reveals’ that ‘Chelsea will make a bid for the 21-year-old once he has played in Saturday’s final’. That’s not a bloody date, Joe Williams.

Alan Fisher on Tottenham and Mourinho