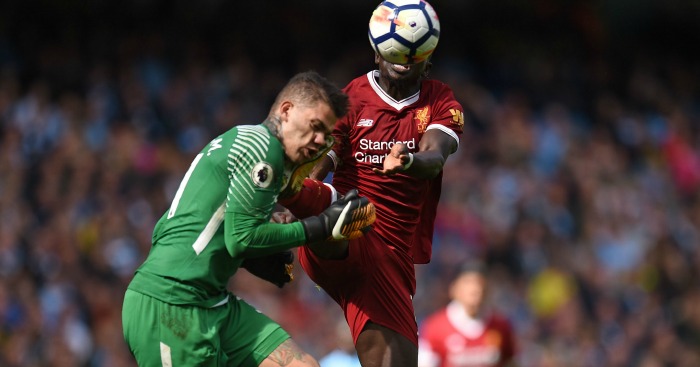 Sadio Mane could have pulled out of his challenge on Ederson, according to Manchester City goalkeeper Claudio Bravo.

Mane was sent off 37 minutes into Liverpool’s 5-0 defeat to City on Saturday.

The Senegal international collided with Ederson while chasing a loose ball, and was dismissed by referee Jon Moss.

Many have questioned the decision to send Mane off, but 16 Conclusions agreed with the referee’s decision.

Bravo replaced Ederson as the Brazilian was stretchered off, and he says that Mane could have “easily avoided” the situation.

“These things are avoidable. You can easily avoid putting your foot in somebody’s face so you don’t do them damage,” said Bravo.

“At first I thought that he had hit him in the hip, but then I saw clearly that he got him with the face.

I hope and wish Ederson a quick recovery. I am so sorry he was hurt during our accidental collision on the pitch and am sorry for him that he could not complete the match because of it. I pray he heals fast and is back playing very soon because he is highest quality player.?☝️

“You go from being on the bench watching the game and within seconds you’re out there playing. Us goalkeepers know this can happen, but you never expect it.

“I wouldn’t have wanted to play for a reason like this, an injury to a team-mate, but you always have to be prepared.”