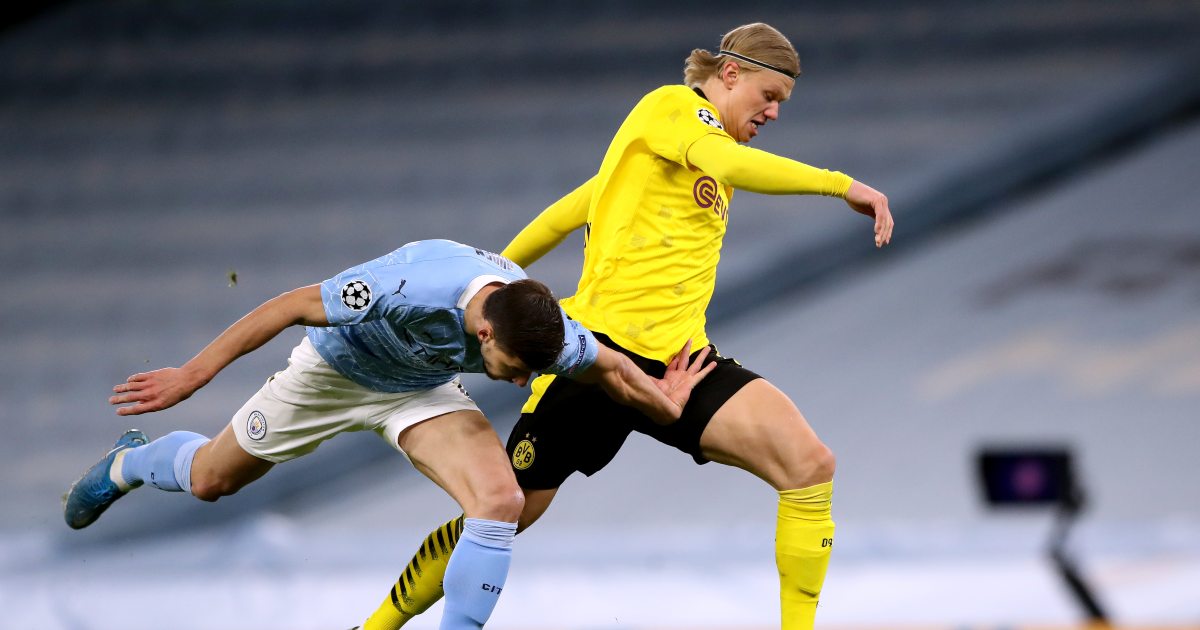 If Erling Haaland does indeed end up in the Premier League, why wouldn’t or shouldn’t it be with Manchester City?

There still seems to be a sense among some that joining City would be all about The Money, whereas joining Manchester United or Liverpool would be a natural progression to the superclub his talent merits. A proper move to a proper club.

It’s not to say that last bit’s not also true, just that to a 20-year-old – and not just a 20-year-old whose dad happened to play for Manchester City – there really is no difference. If anything, City are objectively the more attractive option.

The worst ‘Haaland to Liverpool’ clickbait of all time?

They have a nicer stadium, better facilities and better prospects of silverware in the short and long-term. They have the most celebrated coach of the age and, while Haaland obviously spent some of his formative career with Ole Gunnar Solskjaer at Molde, it’s still the case that United’s manager got his job on the back of a goal scored before Haaland was even born.

Manchester City have been an elite club for well over half Haaland’s life. This may be depressing on a personal level for all those of us for whom 2008 really doesn’t seem that long ago, but that’s the reality.

If the two skint Spanish superpowers can’t afford him this summer, and, despite their history of producing cash when these sorts of deals need doing, they surely can’t, then the Premier League is the only vaguely realistic option left on the table apart from sitting tight in Dortmund for another 12 months and waiting for that sweet, sweet release clause to kick in.

And for Haaland, if it is to be England then City is the destination that makes the most sense. Whether it makes sense for City is a slightly different matter. Just because they can play successfully without a number nine doesn’t mean they don’t need one to replace the outgoing legend that is Sergio Aguero, but it does give them pause to consider whether it requires the scale of investment that Haaland’s signature would command.

But in an ideal money-no-object world it’s hard to deny it would be quite something to see Haaland rampaging across areas of the pitch City currently leave deliberately empty. The idea that he would somehow be a ‘bad fit’ for City’s style is also preposterous. Strikers with Haaland’s clear footballing intelligence and finishing chops fit any style. A shade ironically, the highlight of a rare goalless appearance when he faced City on Tuesday night was an assist that showed just how well he could fit in at City, his clipped pass round the corner for the onrushing Marco Reus precisely the sort of ball the likes of Ilkay Gundogan or new best mate Phil Foden or even Kevin De Bruyne would enjoy very much.

Liverpool are Liverpool, and the appeal there needs no explanation, but there is not the obvious Haaland-shaped gap in the squad. Liverpool’s cut-price attempts to fill some more glaring holes in their squad suggest it’s all a bit unlikely.

Chelsea would make more sense. With Timo Werner not working out, their need for an out-and-out striker is more obvious even than City’s. United’s is perhaps the weakest case of the lot. Even ignoring the fact Erling’s dad played for both Leeds and City – a real shame really that he never had a stint at Liverpool to complete the trifecta – and the unpleasantness with Roy Keane, it just doesn’t seem as good a fit.

Yes, there is the Solskjaer connection, but Haaland at 20 and the most in-demand talent in world football is quite literally a different man to the hugely promising 17-year-old Solskjaer coached in Norway. And United being in the Europa League two nights after Haaland lost at the Etihad is not an alluring look.

The days when City were a lesser option than United are long gone. For a 20-year-old in Haaland’s position and with his background, they look the obvious choice.