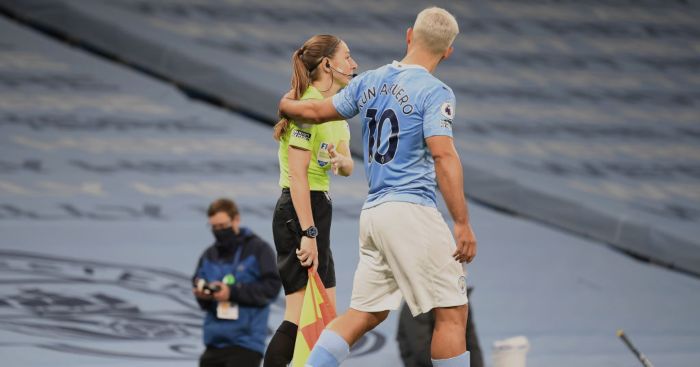 City’s 1-0 win against Arsenal last Saturday saw Aguero dispute a throw-in decision before touching Massey-Ellis as she turned to walk away, an incident that has drawn considerable criticism.

Pundit Neville told CNN: “I think (he) would be best served by apologising.”

After reviewing the incident, the Football Association was satisfied that match officials did not believe any formal action was necessary.

Immediately after the game Guardiola described Aguero as “the nicest person I ever met in my life”, adding: “Look for problems in other situations, not in this one.”

On Friday he was asked if he felt, on reflection, Aguero should have apologised, following Neville’s comment and criticism of the Argentinian from the likes of Alan Shearer and Ian Wright.

Guardiola said: “I know perfectly Aguero. It’s like what happened with Bernardo Silva and (Benjamin) Mendy. People who are coming from outside, I don’t judge. I know the intention from Sergio.

“He put his hands in a normal way, what he does many times to me, on and off the pitch, or when I hug him when there has been a substitution, or when sometimes he touches the referees as well.

“I didn’t see… if I would see some aggression or something like that, maybe. I think it was normal, because I know perfectly Sergio, who has been an incredible, huge star of world football and is one of the most humble and nicest people I ever met.

“The important (thing) is the intention, and the intention was to talk to her in a normal way. And I’m pretty sure – I didn’t speak to Sergio about this – if she felt bad, he would apologise without a problem.

“It is the same as what happened with Bernardo, I know him perfectly well, it was a joke, and today was a normal situation.”

In 2019 Silva was banned for one game, fined £50,000 and ordered to attend an education course after his Twitter post likened his City team-mate Mendy to the mascot for the Conguitos confectionery brand. A regulatory commission found the tweet was not intentionally racist.

Guardiola was speaking on Friday ahead of Saturday’s trip to West Ham, the first of three away matches for City in eight days. That is amid a 23-day period featuring seven fixtures between international breaks.

Having already labelled the schedule sides are facing “completely crazy for everyone, especially the teams that play in Europe”, Guardiola – who has had a number of injuries to contend with in his squad of late – went on to talk about how it was “too much for the players.”

He said: “I love football. I know the business. But it is too much for the players. To sell a better product you have to go for quality.

“(There are) 365 days, and we have to put all the competitions and games (in), and with what happened last season with Covid-19, the calendar is more difficult.

“But it is too much I think for everyone – at least for the teams who play in Europe. For the other ones, maybe it is less.

“We have 10 days, 15 days, and we have to start again – pre-season, the Community Shield, the first games. That is why the players get injured. It’s no secret. You just pray everyone finishes the game without a problem.”

A later announcement regarding television matches revealed City’s home clash with Liverpool had been moved to Sunday November 8.

After Wednesday’s 2-0 Champions League win over Porto, the Portuguese side’s boss Sergio Conceicao was quoted as saying Guardiola’s “attitude was extremely unpleasant” during the game.

Asked about that, Guardiola said: “We didn’t want it to be unpleasant. He believes we are, so maybe he is right. I don’t think so. If he believes this, it is OK.”

A report on Friday said Guardiola, whose current contract with City ends next summer, had entered talks with the club over a new deal, but the 49-year-old said that was not the case.

When asked if it was difficult to think about things like his contract given the schedule, he said: “I can think about many things, no problem.”

He was then asked if a player’s mentality changes when they know a manager is staying into the next season, and said: “Absolutely not. They want to play good every single game.”