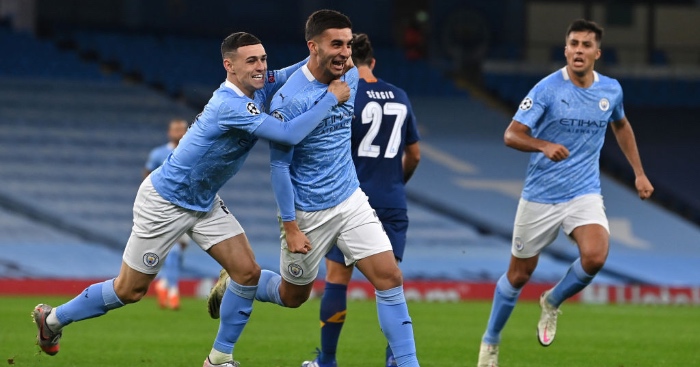 Manchester City made a winning start to their latest assault on the Champions League as they came from behind to beat Porto 3-1 in their Group C opener.

A little over two months after their surprise 3-1 defeat to Lyon in the quarter-finals of last season’s tournament, City recovered from Luis Diaz’s early strike to get back in business with goals from Sergio Aguero, Ilkay Gundogan and Ferran Torres.

It was a hard-fought win against a stubborn Porto side who defended doggedly for much of the night but were undone by a penalty and a set-piece before substitute Torres made sure 17 minutes from time.

Porto had never won in 19 previous visits to England but had their chances as those worrying defensive frailties once again crept into City’s game.

Eric Garcia may want out of Manchester but with Nathan Ake missing due to a groin problem, it was the 19-year-old who got the nod ahead of John Stones.

He lined up alongside Ruben Dias as Pep Guardiola included all four of his Benfica old boys – Dias, Bernardo Silva, Joao Cancelo and Ederson – against their long-time rivals.

City bossed possession in the opening 10 minutes but to no affect as they could not penetrate the Porto area, and it was the visitors who led with 14 minutes gone as they scored their first goal in eight trips to England.

A poor pass from Dias was cut out and Diaz was quick to punish City, the defence unable to get close to him as he cut in from the left, ran across goal and pulled the ball back beyond the reach of Ederson.

But the goal roused City and they had the opportunity to level almost immediately as Gundogan’s run caused chaos in the Porto box.

The German’s shot struck the post but Pepe charged into Raheem Sterling as he chased the rebound, and referee Andris Treimanis pointed to the spot.

There was a long wait as VAR checked for a foul by Gundogan on the goalkeeper, who received treatment, before Aguero eventually beat him from the spot.

The game began to open up later in the half as City found spaces in the Porto half, but they were almost caught out at the other end where Cancelo’s interception of Moussa Marega’s cross was heading towards his own goal before Kyle Walker made the block and City scrambled it away.

The second half began with Walker making a dangerous run across the face of his own goal, but City were soon down the other end where Gundogan’s first-time shot was turned away by the goalkeeper.

The German was then felled by Fabio Vieira on the edge of the area, and picked himself up to bend the shot beyond the reach of Agustin Marchesin as City went ahead in the 65th minute.

It was Gundogan’s final contribution before he and Aguero were replaced by Phil Foden and Torres.

The substitutes combined to add a third for City in the 73rd minute, with Foden finding Torres in the area for the Spaniard to lift a quality finish beyond Marchesin.

Riyad Mahrez shot straight at the goalkeeper while Rodri bent a shot against the post when play appeared to stop following an altercation between Pepe and Sterling, but the job was already done for City.