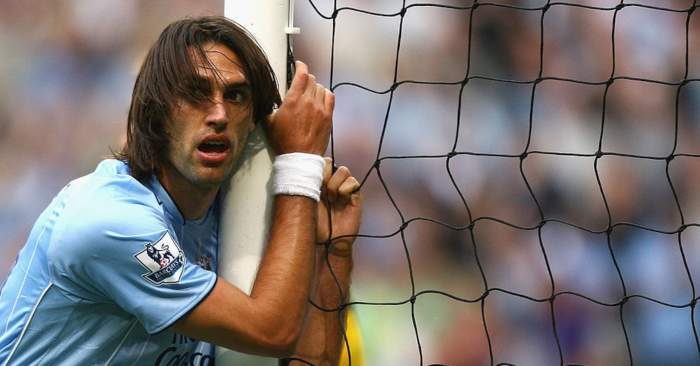 These days it’s a semi-regular occurrence, but back when most supporters were growing up it was sung more in hope than expectation. Something to be brought out at Maine Road when the home side had taken the lead, when wins were hard to come by and fans knew they might not get the chance again for months.

The point is, City fans have always enjoyed United losing. Any rival does. For a long time in the 1990s, that was pretty much the only entertainment they’d get. Maine Road wasn’t exactly a happy place, but it was at least more enthusiastic before the opposition had taken the lead and after news spread that Sir Alex Ferguson’s team had fallen behind.

But City fans are a perverse lot. It’s not acceptable for anyone who is not a City fan to mock our poor fortune, historic underachievement or institutional myopia, but all are worn as badges of honour by the Etihad faithful.

The only club relegated as reigning champions? Over here. Knocked out of the FA Cup by a balloon? Yeah, baby. Relegated because they wasted time by holding the ball by the corner flag, thinking 2-2 was enough to stay up? Could only be one answer. Only side to lose the FA Cup final to a team that was relegated in the same year? You bet.

While City fans wouldn’t be able to laugh about it in the immediacy, there would be something fitting about the team that earned a record number of points in one season to then break the record for the biggest tally for the runners-up the following year – though the fans will be praying that it’s Liverpool who claim that honour instead.

But when Manchester United travel to Huddersfield’s John Smith’s Stadium on Sunday, City fans will be desperately hoping that the home side can cause an upset. First off, it would be very funny to see more misery piled on top of Ole Gunner Solskjaer at the hands of confirmed-bottom-of-the-table opposition, but also because Huddersfield might be about to steal one of City’s backwards badges of honour.

Roll back just over a decade and Manchester City was a very different outfit. There was no Champions League football and no title challenges. There were no billions from Sheikh Mansour or jibes from rivals about oil money. There was only Stuart Pearce, Georgios Samaras and a good luck charm in the shape of a toy horse called Beanie.

By three home games into this current season, City had scored 11 goals. After 19 home games of the 2006-07 campaign, they had only managed 10. It remains the lowest tally for any team on their own patch in a Premier League term and, after witnessing four-and-a-half goalless months at Eastlands, the City fans who managed to sit through that dross week after week can now laugh about how crap it got, safe in the knowledge that it all turned out alright in the end.

It wasn’t so funny when, for the eighth consecutive match, City had failed to find the net again. Especially as that afternoon in the Manchester Derby, they missed a second penalty in two fixtures. Samaras’s second goal in a 2-1 win over Everton on New Year’s Day 2007 was the last time the City of Manchester Stadium got to cheer a Premier League goal until Michael Johnson netted in a 1-0 success over Derby County the following August.

Under that final season with Pearce at the helm, City – strangely – did alright, finishing 14th thanks to a string of narrow wins over Christmas and Easter. There was always the constant threat of relegation, but 2006-07 is the ultimate proof that it isn’t goals that keep teams in the top flight, but rather clean sheets. Their 44 goals conceded was the seventh best in the division – only Aston Villa and Portsmouth had meaner defences outside of the top six.

It wasn’t a time to be a proud City fan, let’s be honest. But – and this is the perversity of the situation – the supporters would rather hang on to the record. Huddersfield have managed just nine home goals this term and they have one fixture left in West Yorkshire: United on Sunday.

It is, admittedly, tenuous to hope that the Terriers can manage two goals to surpass City’s league-record low of 10 – especially since Huddersfield are yet to score more than once in a match at home this season – but David de Gea’s feeble form and the defensive mess in front of him is at least suggestive of some kind of chaos.

The pressure of the title race might be getting to Liverpool fans. But surely this is the one that City fans are sweating on the most. It needs a big performance from Huddersfield to do the business.

David Mooney is the creator and host of the Blue Moon Podcast, an hour of Manchester City radio released every Friday.