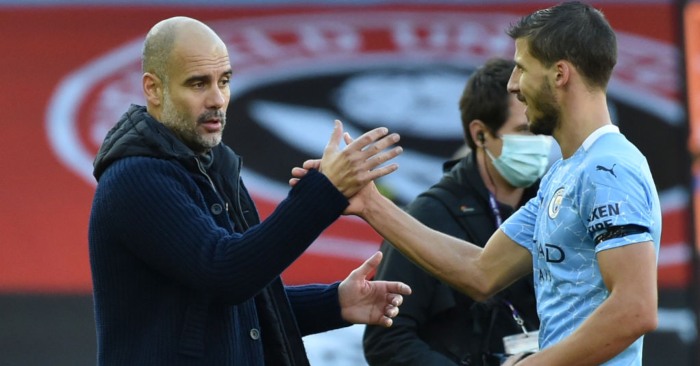 “He has got the biggest job that he has probably ever had in football at this moment in time, to win the title again,” said Gary Neville after an abject 5-2 defeat to Leicester City that saw the death knells rung for Guardiola and this City side. “Right now, I think Liverpool could run away with it,” said Graeme Souness, insisting it would take more than the imminent signing of Ruben Dias to rescue this shambolic City defence.

How about the signing of Dias, the return of Aymeric Laporte, the switch of Joao Cancelo, the continued excellence of Kyle Walker and the significant trust placed in Rodri? Just over a month since that last chastening defeat, City have played seven games, lost none and conceded just three goals; it took them just 23 minutes to leak the same number against Leicester.

Just as defending was going out of fashion, City might just make it cool again. Laporte is offering a reminder of just why his absence was so keenly felt last season, while new signing Dias might well be his perfect partner. He is strong, vocal and clearly a fine reader of the game. A mirror image of Laporte. And then there is Rodri, using his height and physicality to dominate that area of the pitch both in the air and on the ground. The formation might say 4-3-3 but the Spaniard often plays like a third centre-half, a vital role when the full-backs are providing such attacking width.

Against Sheffield United, City started like an express train but soon became one of those local stopping services that moves too slowly and too ponderously to get anywhere fast. There was never going to be an avalanche of goals once Aaron Ramsdale and a tranche of Blades defenders had snuffed out early chances, with City happy to score through Kyle Walker and then spend the rest of the game conserving energy and controlling the tempo.

That might have been a dangerous game a month ago, but Guardiola has fixed City’s defensive vulnerability, through the expensive purchase of Dias and cautious return of Laporte but also through the demotion of Fernandinho, whose presence too often seemed to make Rodri unsure of his purpose. Now playing alone at the base of midfield, Rodri has been excellent in recent weeks. His lack of pace is less of an issue when he is playing on the toes of his centre-halves.

This is not yet a thrilling City side – and perhaps the unique circumstances of this season means we will never see a truly thrilling City side – but this is now a City side that looks incredibly hard to beat. Would a defence with Dias and Laporte at its heart collapse as spectacularly as we saw against Leicester? On the contrary, this has the potential to be the finest centre-half partnership in the Premier League in a season when that might actually be enough to win the title.