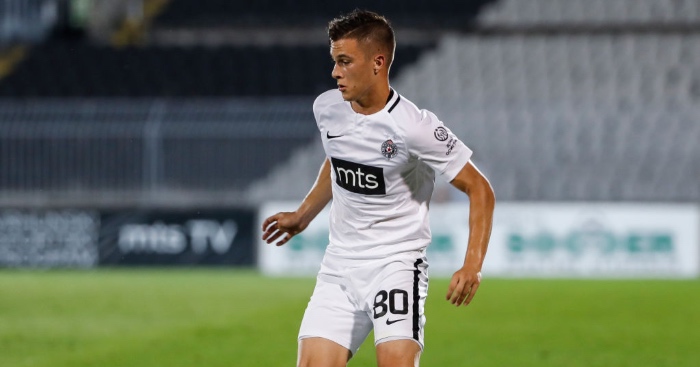 Man City will agree a deal with Serbian club Partizan Belgrade to sign young winger Filip Stevanovic in January, according to reports.

Stevanovic was linked with Man Utd during the summer transfer window after impressing in his home country.

Since breaking into the first team at Partizan he’s made 53 appearances for the club, scoring 12 times and assisting five.

That form will see him secure a January move to the Premier League, as Man City have agreed to sign him in January according to Manchester Evening News.

The deal will cost City around £6 million, which is a relatively small sum for a player with plenty of potential and first team experience.

Stevanovic has had a decent start to this campaign, too. He’s scored two goals and assisted three more in his first ten matches for Partizan.

The 18-year-old is certainly one to watch for the future and could link up well with the likes of Phil Foden and Ferran Torres if the club nurtures him correctly.

He is yet to feature on the international stage for Serbia’s first team, but he is an important part of their U21 setup.

Since becoming a Partizan regular, Stevanovic has seen his profile rise throughout Europe. It’s thought that a host of Europe’s elite clubs have been scouting him to assess his potential to reach the top.

City look like they’ve now won the race to sign him and could complete the deal in the coming weeks.

He will follow players such as Nathan Ake, Torres, Ruben Dias and Yan Couto. They all joined during the summer with manager Pep Guardiola clearly prioritising players for the future.

City are currently preparing for their Premier League fixture this weekend. They face West Ham away from home at 12:30 on Saturday.