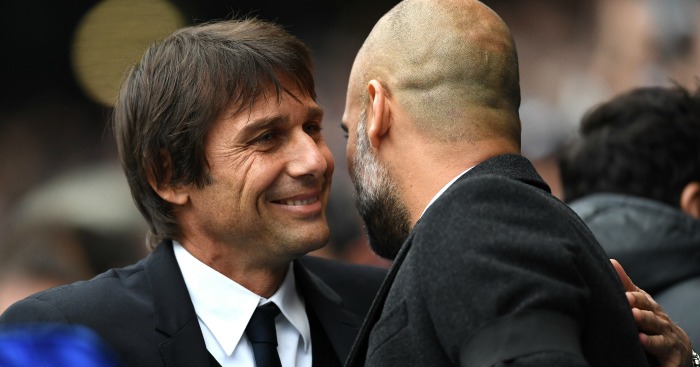 Chelsea are fast approaching “crisis” territory. Three points from their last four league games has put Antonio Conte under intense scrutiny, with defeat to Manchester City on Sunday likely to leave the Blues five points adrift of the top four.

But in our fickle sport crisis and optimism are never far apart; a shock win at the Etihad would clear the gathering clouds, reaffirm Conte’s tactical nous, and restore confidence in the dressing room ahead of Chelsea’s trip to the Camp Nou in a fortnight. In other words, it’s a pretty big game.

1) Will Conte show attacking aggression by playing Hazard, Willian, and Pedro?
It is increasingly clear that bold attacking tactics are the best way to hurt Manchester City. Arsenal might have been hammered on Thursday night but for the opening ten minutes they looked very dangerous on the break, largely because Arsene Wenger deployed Danny Welbeck alongside Pierre-Emerick Aubameyang in a narrow 4-2-2-2 formation. As Liverpool showed in their 4-3 defeat of Pep Guardiola’s team, City’s high line can be exposed – if you’re brave enough.

It’s never easy to predict which combination of forwards Antonio Conte will pick. His best bet this weekend is to play Eden Hazard up front with Pedro and Willian behind (as in the 1-1 draw with Barcelona) in order to create a fast, fluid counter-attack that pushes City back. However, the Italian is prone to caution in big games and thus Alvaro Morata, without a goal since Boxing Day, or Olivier Giroud will likely start.

In fact, Conte tends to play an uber-defensive 3-5-1-1 for big away games and he will probably revert to type following his sides’ chastening at Old Trafford last weekend. City, then, are early favourites to dominate possession and grind Chelsea into submission… although using a three-man central midfield does mean there’s room for Cesc Fabregas:

2) Will Fabregas successfully launch counter-attacks in Fernandinho’s absence?
Manchester City are considerably weaker without Fernandinho in the side. Statistically, the Brazilian doesn’t complete many defensive actions (3.4 tackles and interceptions per match, not even enough to put him in the Premier League top 40), but his positional play during sustained periods of Man City possession is crucial to Guardiola’s tactical shape. His screening work in front of the defence blocks off opposition midfielders as the attempt to break, forcing them into wild clearances that gift possession back to the league leaders.

Ilkay Gundogan isn’t as disciplined or positionally intelligent, and consequently Fabregas should occasionally find space to launch one of his long diagonals into the channels, gaining vital ground for Chelsea while moving Eden Hazard and Alvaro Morata into dangerous territory. The Spaniard’s ability to instigate breakaways will define Chelsea’s participation at the Etihad.

Of course, from a defensive standpoint playing Fabregas in midfield comes with its own risks…

3)  Can much-improved Aguero inflict damage in Chelsea’s soft centre?
It goes without saying that City’s pair of false-eights, Kevin de Bruyne and David Silva, are the primary threat to the Chelsea goal. Few players in world football dominate the half-spaces quite like these two, who should be able to pull Fabregas and Danny Drinkwater out of position.

Theoretically, Chelsea’s deep defensive shell should prove suffocating in central areas, but this wasn’t the case against Manchester United last weekend. Alexis Sanchez and Romelu Lukaku wriggled through the tight spaces ahead of the Belgian’s equalising goal, highlighting Drinkwater’s poor defensive positioning relative to Tiemoue Bakayoko (who, unlikely to recover from a knock, won more tackles than any other player when the two sides met at Stamford Bridge).

Perhaps the most interesting development at City over the last month has been Sergio Aguero’s sudden improvement. After 18 months struggling to adapt to Guardiola’s tactics, the Argentine has suddenly begun to drop short at the right moments, linking play neatly to make the champions-elect even more fluid in the final third.

4) Who will come out on top in the battle between Moses and Leroy Sane?
The most interesting head-to-head on Sunday is between Victor Moses and Leroy Sane. Moses will need plenty of support from Cesar Azpilicueta to keep the Germany international quiet, but equally Sane must work harder than usual to ensure Moses doesn’t inflict damage at the other end.

Sane is fast becoming the world’s best out-and-out winger; his contribution against Arsenal on Thursday was, frankly, frightening. Even if Moses and Azpilicueta double up on him, the 22-year-old could come out on top.

However, Sane must track back. Danilo isn’t the most consistent of left-backs, while Fernandinho’s absence means the space behind Sane won’t automatically be shielded. Should Chelsea break forward, keep an eye on the foot race between Moses and Sane.

5) Will crosses from deep prove decisive in such a tense, claustrophobic game?
As Premier League matches increasingly become attack-versus-defence the good old fashioned cross has come back into vogue (Liverpool, for instance, have begun swinging balls into the box from deep in response to losing Philippe Coutinho’s pinpoint through-balls). Statistically, the two most accurate crossers in the division are Manchester City and Chelsea. In what should be a low-scoring game defined by a congested midfield, crossing the ball from deep positions could play a surprisingly large role.

De Bruyne, the fourth most frequent crosser (from open play) in the Premier League, will no doubt look to cross towards the back post, an area Chelsea have struggled to defend throughout Conte’s spell in west London. De Bruyne will seek out Sane’s brilliant arcing runs in between the wing-back and centre-back.

For Chelsea, Fabregas is the most prolific crosser (4.3 attempted per match). Assuming Morata or Giroud start up front, this is undoubtedly a strategy Chelsea will look to utilise; after all, Conte’s side have scored as many headed goals this season (13) as any other club in Europe’s top five leagues.