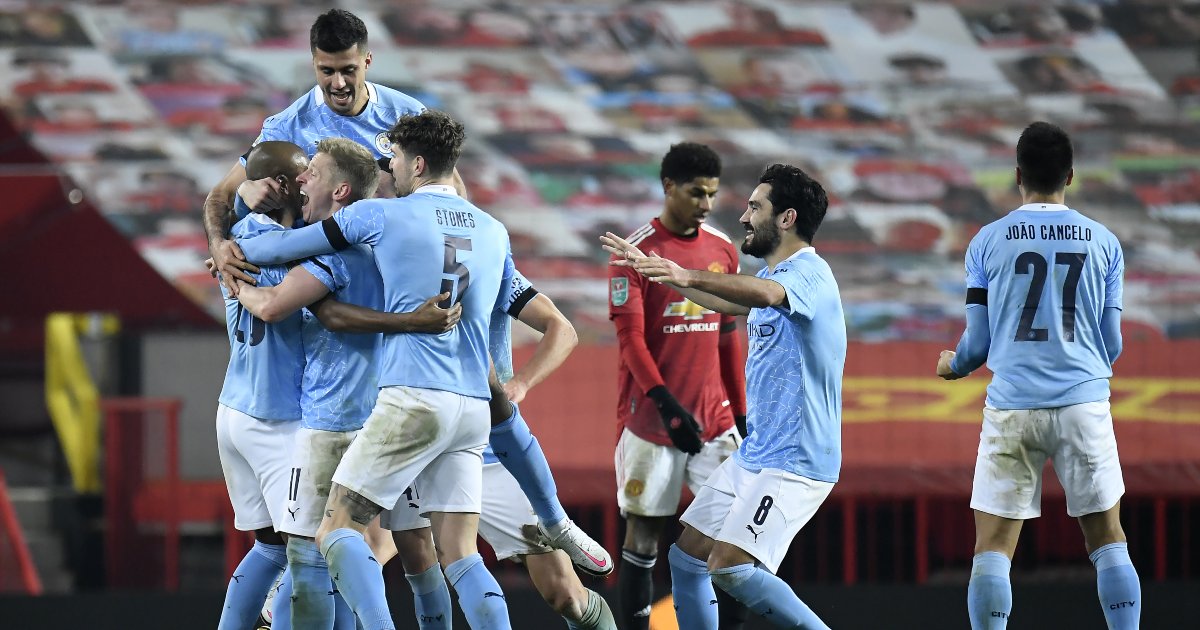 It’s Man City v Man United. And we desperately want this to be good. But first…tactical questions:

1) Does United’s ‘Big Six’ mentality point to yet another 0-0?
Manchester United’s approach to ‘Big Six’ matches is very well-established now, and while three consecutive 0-0 draws might have been frustrating to watch, Ole Gunnar Solskjaer would surely be pleased with another non-event on Sunday.

United will do what they do best: sit in a low block, compress space between the lines with conservative positioning, and absorb pressure as Manchester City hold the ball. Pep Guardiola has doubled down on ball retention this season as a way of controlling the chaos of pandemic football, which only adds to the worry that this game will be lifeless.

The reverse fixture at Old Trafford in December finished 0-0 and was completely forgettable, with both sides taking the point and moving on. City are happy to pass the ball around at a low tempo and United are happy to watch them do it as they safely guard their goal. Don’t expect a classic.

2) How does Solskjaer inject some creativity into his side?
Solskjaer doesn’t coach attacking structure with anything like Guardiola’s level of detail, instead preferring to let his players improvise their own attacking lines. This means United struggle to build fluidly in more than ones and twos – unable to string together rehearsed processes, or rely on preordained movement to think their passes three or four steps ahead – and it also means they are dictated by confidence.

When in form, an individualistic approach works well, but as soon as it wanes the players’ minds seize up and there are no choreographed moves to fall back on – hence a dearth of creativity over the last ten Premier League games. A top team should not simply rely on their best players to come up with a moment of magic. Solskjaer needs to find another way.

With Juan Mata and Paul Pogba still injured, it is highly unlikely they will find a solution to their creativity issues at the Etihad on Sunday.

3) Can Mahrez and Foden taken advantage of a United weakness?
Although overall United’s defence is one of the best in the league, there are minor flaws that open up in the defensive transition. Mason Greenwood and Marcus Rashford play relatively close to Edinson Cavani almost in a front three despite Solskjaer picking a 4-2-3-1, and on occasion that means space opens up on either side of their two-man midfield.
During the opening 30 minutes Crystal Palace looked briefly dangerous in these pockets of space, although ultimately they were pinned back too successfully to profit. On Sunday, United’s deep block will largely close down these gaps on the outside of the midfielders, but if one of their counterattacks breaks down then Man City will know where to target their passes.

Kevin de Bruyne, Phil Foden and Riyad Mahrez will occupy precisely these zones of the pitch in pursuit of space. Guardiola’s formation looks like a 3-2-5 in possession with at least three forwards lurking in the half-spaces and between the width of the opposition back four. Scott McTominay and Fred will need a lot of help.
4) Will Cancelo role make the difference at either end?
Man City’s formation changes every game are based on a near-constant reconfiguration of the full-backs: in some matches they overlap, others they drop into midfield, and others they form part of a back three. That each of these scenarios can happen on either flank gives the Man City manager six distinct options for building possession.

The most likely set-up for this game is Joao Cancelo on the right (deployed as a midfielder) and Oleksandr Zinchenko on the left (as part of a back three), because this will help City work the ball through a congested midfield and ensure a centre-back (John Stones or Ruben Dias) is on the right, where United focus their counter-attacks.

Cancelo’s ability to burst through the lines, taking up unexpected positions and ghosting through midfield, is regularly City’s route to out-foxing a compact and disciplined defensive blockade. But defensively, his hybrid role could leave City mildly exposed down their right side.

In transition, Stones or Dias will have a lot to contend with alone on the right; 43% of United’s attacks are down their left, the third most in the division (behind Crystal Palace and Aston Villa, who lean heavily on Wilfried Zaha and Jack Grealish respectively).

5) Can Fernandes and Cavani combine around Rodri?
United may lack detail and sophistication in their attacking play, but they do have one method of ball progression that had been bearing fruit prior to this string of 0-0s. In a team that can often be accused of failing to move towards the ball, Edinson Cavani’s intelligent centre-forward play sees him drop off the front line to play one-twos with Fernandes, breaking the lines and disrupting the opposition.

From here, United can drive at the defence or spread the play and create an overload on the flanks. Man City will no doubt have come up with a plan for how to stop Fernandes from dictating the game, but with Rodri flanked by De Bruyne and Bernardo Silva in midfield there is, potentially, a defensive weakness in the heart of the City line-up.
Alex Keble