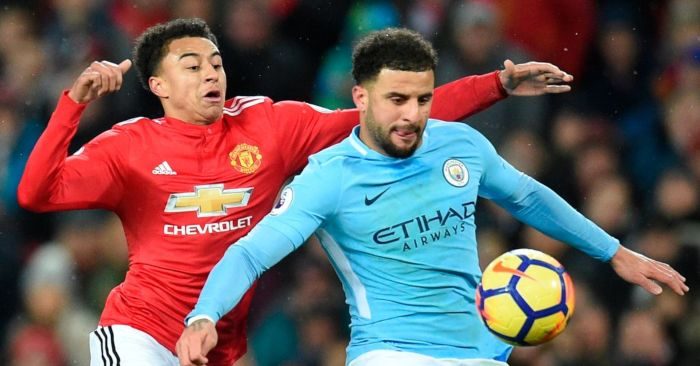 An unhappy return to Old Trafford for Jose Mourinho on Wednesday night has suddenly made Saturday’s Manchester derby interesting. Ole Gunnar Solskjaer’s side deserved a 2-1 win in midweek characterised by brilliant individual performances from Fred, Scott McTominay and Jesse Lingard against an admittedly passive Tottenham midfield.

If United repeat that performance at the Etihad – and Manchester City continue to look hesitant in defence and overly reliant on Kevin de Bruyne in attack – then we could witness the surprise result of the season.

1) Can Man Utd’s deep block stop width-less City?
The overall tactical shape of this match isn’t hard to predict. Man Utd will sit back, relying on a strong defence that has got them positive results against Chelsea, Arsenal, Liverpool, and Spurs this season. City will dominate territory and hog the ball, hoping to break through a surprisingly rigid back four via Raheem Sterling and David Silva, the two players most in-sync at the moment in the left-centre space.

City look a little disconnected in other areas of the pitch. De Bruyne’s repositioning to the right side of midfield has separated him from Silva (a relationship that used to be so fruitful), but more importantly Guardiola’s use of full-backs this season is making it difficult to break down opponents as narrow and stubborn as United will be.

Ever since it became clear Fernandinho’s absence from midfield made City worse at stamping out counter-attacks Guardiola has sat Kyle Waklker alongside Rodri or Ilkay Gundogan, meaning the inverted full-back offers nothing out wide. Neither Benjamin Mendy nor Angelino overlap on the other flank, and so City lack runners on the flanks to stretch a defensive shell. Leroy Sane’s injury compounds this problem, helping to explain why that classic City goal – long diagonal, through ball in behind, pass across goal, tap-in finish – has disappeared. City’s lack of width could lead to a shock result on Saturday.

2) Or will De Bruyne and Bernardo find joy around Williams?
Then again, De Bruyne’s frequent crossing from the right – bizarrely City’s best attacking trait this season – might be even more effective than usual given Man Utd are relying on 19-year-old Brandon Willliams at left-back. Ashley Young returned from a one-month absence to play 90 minutes against Spurs in midweek, but he is unlikely to be asked to play twice in four days.

Williams has done well so far across three league starts, although he did struggle up against Anwar El Ghazi in the toughest of those three, a 2-2 draw with Aston Villa. Man City at the Etihad is a whole new level.

His task is made particularly difficult in this United team by Rashford’s high starting position. During sustained periods of City pressure the young left-back will have support – meaning they can get out to block De Bruyne’s crosses – but when the hosts counter-press there will be trouble. De Bruyne makes intelligent runs on the inside of the opposition left-back that are particularly effective when Bernardo Silva plays.

Silva started his first league in a month in midweek, grabbing two assists in the 4-1 win at Burnley to prove his value to this team. His combinations with De Bruyne would threaten any left-back.

3) Will Fred, McTominay and Lingard pick up where they left off to start counters?
Probably the most remarkable thing about United’s shock victory over Tottenham on Wednesday was the outstanding performances of Fred and Jesse Lingard. The Brazilian was everywhere, seizing loose balls and spraying passes cleverly out to Rashford or Lingard, while the England playmaker was like his old self: moving intelligently into the number ten space on the blindside of the opposition midfielders and linking with both wingers.

The only way United will be able to launch counter-attacks and avoid being penned in by the City press is for Fred, Lingard and McTominay to exchange passes with the same sharpness and confidence as at Old Trafford. That’s not as big an ask as it sounds given City’s softness through the centre in recent weeks. As previously mentioned, Walker isn’t very good at working out where to stand or how to press from central midfield, while Rodri is yet to work out his defensive positioning in English football.

Lingard and Fred have been arguably the two most heavily criticised United players, and it has no doubt affected their confidence. If the Spurs win has provided a lift, their talent could define Saturday’s game.

4) Do Rashford and Greenwood have a major advantage down City’s right?
To return again to Walker’s position, City have looked vulnerable over the last few weeks when teams focus on counter-attacking down his side of the pitch; if Lingard and Fred can indeed instigate breaks, an in-form Rashford will have ten yards on Walker as his England team-mate looks to recover diagonally from a midfield position.

United naturally lean to the left, where Mason Greenwood tends to run the channels in close support of Rashford, while City are made weaker by John Stones’ presence covering for Walker. It was his missed tackle – and a Newcastle attack down City’s right – that led to Jetro Willems’ equaliser last weekend, plus Walker’s poor positioning allowed Jeff Hendricks to score for Burnley in midweek.

Opportunities will be few and far between, yet if United reduce City to sluggish possession then Rashford will only need one chance to build up speed down the left flank and, exchanging passes with Lingard, expose a slow and disorganised City back line.

5) Or will United’s away form simply let Jesus run riot?
It’s the simplest tactical point to make, but frankly the other four questions might be overthinking a game that, based on the form guide, could be hopelessly one-sided. Man Utd have won just one of their last 11 away league games – and that was at Norwich – while Man City looked in full flow in a 4-1 victory over Burnley and have won 23 and drawn one of their last 26 Premier League matches at the Etihad.

United are hesitant away from Old Trafford, too often playing without any discernible identity; they don’t press and they don’t sit deep, don’t target specific areas of weakness and don’t interact with one another as if coached specific moves in training. In fact, throughout the 2019/20 season Solskjaer’s team just exists – floating aimlessly around the pitch without any sense of a plan.

If that happens again, and the size of the occasion certainly could see the United players freeze, then the Silvas and De Bruyne can simply burst straight through the heart of the visiting team. Gabriel Jesus’s double at Turf Moor shows he has the lethal touch to take advantage of space in the box, and with so many creative players on the pitch it would take a heroic away display from United to prevent Jesus from getting shots away. If it wasn’t for that Spurs win, we’d be predicting a 5-0 to City. That could still happen.