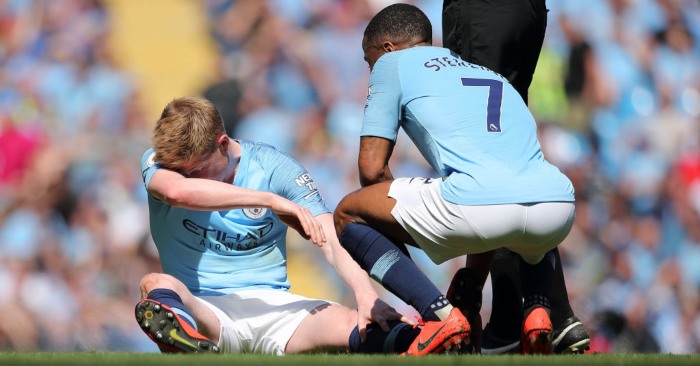 That it took 76 minutes to break down Aston Villa last weekend will not fill Tottenham Hotspur fans with confidence ahead of a trip to Manchester City, who barely had to move out of first gear on Saturday to destroy West Ham. Three years of Pep Guardiola’s tactical training have given City the muscle memory to pass and move in perfect triangles, making them vastly superior to any other team in England.

But Tottenham do tend to raise their game when facing Man City, pressing aggressively to create a tense and oppressive midfield battle. The win won’t come easy for Guardiola’s side, and yet with Tottenham looking vulnerable in the full-back positions and missing both Heung-Min Son and Dele Alli, the hosts should collect the three points.

1) Will Pochettino go three at the back to sure up Rose and Walker-Peters?
Tottenham lined up in a 3-5-2 formation the last time these sides met, a 1-0 victory for Man City at the Etihad in April, and Mauricio Pochettino could deploy the same formation to provide additional support to Danny Rose and Kyle Walker-Peters. Both full-backs have an error in them, Rose having been beaten too easily by John McGinn in Spurs’ opener and 22-year-old Walker-Peters still raw. Playing with three centre-backs also has its advantages in helping to close out the inside-forward spaces in which Raheem Sterling tends to occupy.

However, it is more likely that Pochettino will use the diamond 4-4-2 that began the Aston Villa match, not least because Juan Foyth’s injury and apparent fitness concerns over Jan Vertonghen leaves the Tottenham manager with limited options at the back. In a diamond, Spurs can pack the midfield with bodies while giving Christian Eriksen the creative freedom he enjoyed against Villa from an advanced role – as well as pick Harry Kane and Lucas Moura to counter-attack together up front.

My face this weekend when we concede within the first 4 minutes against City.

My face when I realise it’s because we’ve resorted to playing the diamond again & Vertonghen’s in the away end.#coys #thfc #spurs #PL pic.twitter.com/cf2lbovOfa

2) Will Ndombele be able to prevent De Bruyne from running the right channel?
The diamond formation, essentially using four central midfielders, should create a claustrophobic and compact game at the Etihad, more reminiscent of the three 1-0s between the sides last year than City’s 4-3 win in the Champions League. In such a cluttered midfield battle, the key head-to-head is between Tanguy Ndombele and Kevin de Bruyne.

De Bruyne’s role has changed slightly this season. The Belgian alternates between dropping alongside Rodri to help out his new team-mate defensively and drifting out into the right half-space to collaborate with Riyad Mahrez in attack. These two overloaded West Ham left-back Aaron Cresswell last weekend to devastating effect, and should be able to similarly trouble Rose on Saturday – particularly if Spurs play with such a narrow midfield.

Moussa Sissoko is likely to be the midfielder closest to Rose, but it is Ndombele’s presence at both ends that should either force De Bruyne alongside Rodri or allow him to roam up the pitch. Should the Frenchman burst forward in possession and seek to support Eriksen, then De Bruyne’s influence will be limited; theirs is a territorial battle that will go some way to deciding which side is on top.

3) Can Kane put pressure on Rodri?
Against both Liverpool and West Ham, Rodri was caught in possession on a couple of occasions in the opening 20 minutes, a typical sign of teething problems after arriving in such a fast and physical division. The mainstream narrative is that Rodri managed to adapt as each game wore on, but in reality it’s just that both of City’s opponents lowered the intensity of their pressing and tackling at around the half-hour mark.

Rodri looks like he’s going to have an adjustment period to the speed and intensity of the Prem. He was caught unaware and gave up possession in his defensive third multiple times.

Spurs are unlikely to similarly let up. Harry Kane in particular has a big role to play dropping into his favoured number ten position and nicking possession from Rodri, but it would be naïve to pinpoint just one player looking to harass the Spaniard off the ball. The only times West Ham looked close to scoring at London Stadium last Saturday was when Rodri was pickpocketed and space suddenly opened up in the final third. Pochettino will most definitely instruct his players to swarm Rodri.

4) How can Spurs target Zinchenko?
The obvious weak point in the Man City team is Oleksandr Zinchenko, who always looks a bit shaky and positionally unsure when playing left-back. However, Tottenham’s probable formation doesn’t provide a clear pathway to target the Ukrainian, particularly given that Walker-Peters will be instructed to play cautiously with Sterling lurking on the left.

Lucas Moura, peeling off to the right, is the only quick attacker in the Spurs team while Heung-Min Son serves his suspension, and so he is their best option to run in behind Zinchenko when Tottenham launch counters. Long balls into the channels from Toby Alderweireld would be a good idea in such a restrictive, high-pressing game.

But such is the complexity and efficiency of Guardiola’s tactic,s Zinchenko is unlikely to be exposed. In fact, he will pop up in central midfield just as often as left-back, providing cover for when Rodri strides into the Spurs half and making himself available for the connecting ball between Kyle Walker and Sterling. Chinks in City’s armour are so minute Spurs probably won’t discover them.

5) Will Sterling versus Walker-Peters settle the contest?
The machine-like efficiency of Sterling at the moment should strike fear into Spurs fans, particularly as the game wears on and gaps begin to open up. That he faces Walker-Peters is problematic. The right-back has the athleticism to stand Sterling up when one on one, but the bigger risk is during moments when City counter-attack on the outside of Tottenham’s narrow midfield, with Sterling particularly threatening making runs on the inside of the opposition full-back.

#FPL captain choice. Salah, who’s played 120 minutes in 30 degree heat 3 days before playing a leaky Southampton away, or Sterling with a weeks rest at home against Kyle Walker-Peters?

In all probability City’s superiority across the pitch will bring them victory, but should Spurs manage to restrict the hosts then Guardiola will look to Sterling’s one-on-one with Walker-Peters as the main source of a late goal.