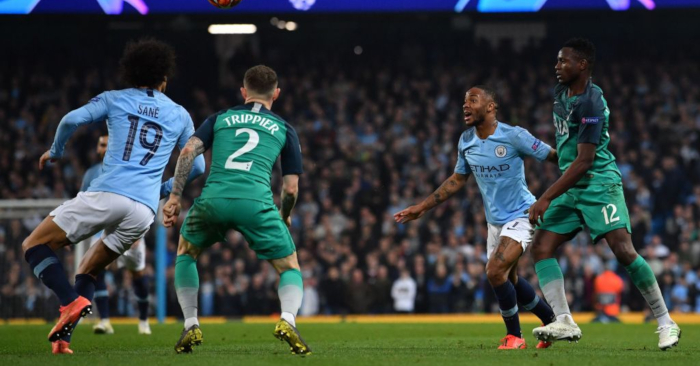 Watching Manchester City face Tottenham just three days after they produced one of the most breathless, extraordinary 90 minutes of Champions League football in history will feel a little odd. It is probable that, with the match reset to 0-0, this one will be more cautious – not just because they will be fearful of each other’s attacking strength but because they’ll frankly be exhausted after Wednesday’s drama.

Amid the chaos, it is worth highlighting that Pep Guardiola’s side were pretty dominant aside from a couple of unforced Aymeric Laporte errors, and even then they actually won the game 4-3. With Moussa Sissoko out injured and Spurs down to the barest bones, Saturday’s game ought to be a fairly comfortable win for the hosts.

1) Will De Bruyne tear through Spurs’ injury hit midfield?
The biggest problem for Tottenham is Sissoko’s injury; Man City had 70% possession in the 50 minutes he was off the pitch on Wednesday, while Kevin de Bruyne’s three assists reflected his ability to weave effortlessly through midfield. Victor Wanyama and Dele Alli surely aren’t agile enough defensively to stop De Bruyne from bursting through the heart of the team on Saturday.

De Bruyne repeatedly picked up the ball on the halfway line and drove forward in possession, playing a neat one-two in the build up to Raheem Sterling’s opener and dancing through the middle to set up Sergio Aguero’s goal. Sissoko’s energy in the midfield battle will be vitally missed, even if Mauricio Pochettino decides to go down a more conventional route with his replacement…

2) Will Pochettino play Skipp rather than start Llorente?
Pochettino’s decision to bring Fernando Llorente on instead of Oliver Skipp was a bold one, and while the Spaniard’s tie-winning goal ultimately vindicated the decision this match swung pretty heavily in the hosts’ favour once Spurs were left with a two-man central midfield. Pochettino is unlikely to do that again, instead starting Skipp and restoring the diamond 4-4-2 formation.

This should at least help keep De Bruyne quiet, while Skipp’s ability to hold possession under pressure could aid Spurs’ counter-attacks. Llorente, on the other hand, did very little at the Etihad aside from accidentally scoring with his hip. The Spaniard slows the Spurs attack down, and for such a frantic contest the visitors need to be considerably sharper than they’re capable of being with Llorente holding up the ball.

3) Can Sane and Sterling make life difficult for Spurs’ full-backs?
Then again, the biggest problem with Tottenham’s diamond 4-4-2 was its narrowness. Perhaps fearful of De Bruyne or David Silva, the Spurs midfield was bunched in central areas for much of the first half in midweek, leading directly to the first three City goals. Without supporting players in the wide areas, Raheem Sterling consistently found space up against Kieran Trippier once De Bruyne had drawn Spurs players towards the ball.

This is a deliberate ploy of Guardiola’s, no matter the opponent. His wingers hug the touchline before making late runs infield, ghosting into spaces because so much of City’s build-up play is in central areas. Pochettino’s diamond 4-4-2 is vulnerable to Sterling’s movement in particular, and having been rested in midweek Leroy Sane might just join him from the other side. Sane against Danny Rose, who was caught badly out of position on numerous occasions midweek, is a scary thought for Spurs fans.

4) Will Son and Lucas catch City on the break again?
Of course, it would be wrong to suggest Spurs don’t have a chance this weekend, although truthfully Heung-min Son’s impact in the opening ten minutes is the only reason Spurs progressed. He will need to be similarly explosive here for the visitors to stand a chance, linking with Lucas Moura in the spaces left by City’s attacking full-backs.

Vincent Kompany will probably be dropped for John Stones (the Belgian looked far too slow for the midweek game) and Laporte is unlikely to make another two big mistakes, so Spurs will find it even harder to counter-attack successfully on Saturday. But if there is one vulnerable spot for Spurs to target, then it’s Benjamin Mendy’s flank. The Frenchman is too regularly caught out of position; should Lucas lean out to that side of the pitch Tottenham may find some joy.

5) Or will a reinstated Fernandinho shut the game down?
Guardiola surely won’t leave Fernandinho out again. Man City were unsurprisingly porous in the first half of the Champions League game partly because of the Brazilian’s absence. He is always available for the pass, and so it is plausible Laporte would have played a simple ball to City’s leader had he been on the pitch rather than twice make careless errors that resulted in Tottenham goals.

Fernandinho’s screening should prevent Christian Eriksen from launching counter-attacks with long balls forward, plus he can drop to make a flat back three when City are on the attack. This will allow the centre-backs to split wider, shutting down the channels in which Son and Lucas will attempt to operate.