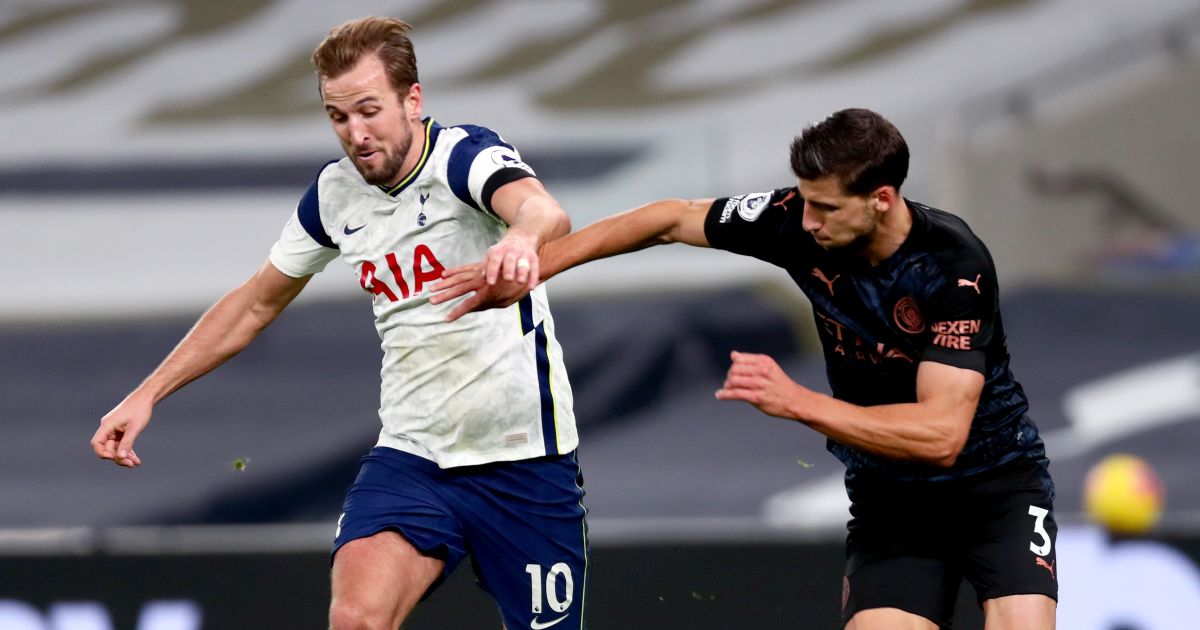 Man City are overwhelming favourites against Tottenham based on form alone. Harry Kane will form the obvious crux of any Jose Mourinho plan.

1) Is Guardiola’s adapted system a bad fit for this game?
Manchester City’s 15-match winning streak is the result of Pep Guardiola working out how to play pandemic football: controlling the chaotic variables that come with empty stadiums, exhausted players and minimal time on the training field. Where others have tried to bury the problem by doggedly continuing with their usual strategy, Guardiola faced it head on and decided to slow everything right down.

The result is an increase in sideways passing and possession recycling, and a marked movement towards the centre of the pitch as Guardiola begins to embrace the strategy he always loathed: tiki-taka. From deploying the falsest of nines to picking hyper-inverted wingers, to repositioning Joao Cancelo into a semi-permanent central-midfield role, Guardiola has sucked everything into the middle.

Like Emperor penguins in Antarctica, Man City seek to avoid the swirling storm of pandemic football by huddling close together, by sharing the burden with measured and delicate possession. It has provided them with a strong defensive platform and – in a (sort of, let me have this one) penguin-shaped ultra-narrow 3-2-3-2-0 – means Man City are passing teams to death in a giant, defiant rondo.

They haven’t yet played a team as defensively minded but technically strong as Tottenham, and clearly Jose Mourinho’s normal park-the-bus mentality for a trip to the Etihad poses a unique threat to Guardiola’s system.

Whatever happens, it’s unlikely to be an entertaining game for the neutral, with Spurs sitting off as Man City happily keep the ball in neutral areas.

Guardiola’s use of a false nine is consistently troubling opposition defenders, who without an obvious target to mark find themselves hesitating into retreat (creating dangerous pockets of space between the lines) or rashly closing down the ‘forward’ (leaving big holes in the back four). It’s a lose-lose situation when Man City have so many attacking midfielders buzzing around in the final third, but a particular concern with Gundogan flourishing in a more advanced role.

He is consistently scoring or assisting from the edge of the D having advanced beyond the false nine into this position. It is a simple enough move, but one made almost impossible to track by the constant positional rotation among the City players and the distraction of both wingers cutting inside to support.

Eric Dier and Toby Alderweireld, Mourinho’s preferred centre-back partnership, are often caught flat-footed. It is easy to envisage both struggling to cope with the agility and fluidity of a City front line that refuses traditional marking.

3) Will Mourinho pull another defensive surprise?
Aware of this danger, Mourinho might spring another tactical surprise on us. He has been creative in the search for defensive solutions this season, most recently going man for man with Chelsea’s 3-4-2-1 in a bizarre and chaotic 4-2-2-2 formation.

Leaving the flanks completely open, Spurs’ box-shape midfield tried to shut Chelsea down simply by tracking each player – and it really didn’t work. Mason Mount was constantly free, while Chelsea’s front two were easy to play in behind because the half-spaces were left entirely unoccupied by Tottenham.

Other experiments have been more successful, most notably the use of central midfielders as auxiliary centre-backs to form an unusual flat back six in the 2-0 win over Man City. In November, Spurs’ ultra-narrow shape was enough to close City down, with Pierre-Emile Hojbjerg and Moussa Sissoko confounding Guardiola in that ambitious and creative defensive structure.

But a lot has changed since then and it is unlikely Mourinho will simply be able to repeat the trick, not now his own team are in such poor form and Man City are flying. Nevertheless a tactical surprise is plausible. If the line-up is weird, then this game will come down to how quickly Guardiola can react.

4) Can Kane find room in a Cancelo-run midfield?
It isn’t all about the rhythms of Man City’s attack, of course. There is little doubt Spurs will lose this game if they are penned in by the hosts, which is why their capacity to counter-attack through Harry Kane and Heung-min Son is vital even if Mourinho would be happy with a 0-0.

Tottenham’s biggest problem is how to get Kane on the ball in such a congested midfield. Cancelo sits alongside Rodri to form a two-man defensive axis that aims to screen against opposition counters, yet it is from within this area that Kane will seek to set Son away. The most important tactical battle of the match is between Kane and Cancelo.

The Portugal international may be able to outmuscle the Spurs striker, but their head-to-head is complicated by the fact Cancelo is required to drop quickly to right-back when there’s a turnover of possession.

5) Can Son take advantage of Stones’ role in a wide back three?
And finally on to Son, whose hat-trick of assists against Everton in midweek signalled a return to form that has no doubt been triggered by Kane’s recovery. Son primarily makes runs down the left channel, moving sharply into spaces behind the opposition full-back whenever the ball goes near either Kane or Tanguy Ndombele.

Ndombele will most likely start in his favoured deeper midfield role, which means he can get on the ball in congested areas and wriggle away from the first wave of Man City press. If he does this successfully, or if Kane can be found in pockets around Cancelo, then Guardiola’s side need to start panicking.

City are essentially playing with a back three these days and Guardiola controls against counter-attacks down the wings by stretching the three centre-backs right across the width of the pitch. Along with Rodri and Cancelo they form a stretched ‘M’ shape that always looks more vulnerable and exposed than it actually is.

Perhaps Son can become the first player to show its flaws. Stones is not a right-back yet he is often all the way out to the touchline, with Ruben Dias a good 20 yards away and only Cancelo blocking off the space between them from midfield. Son will look to escape into this channel.