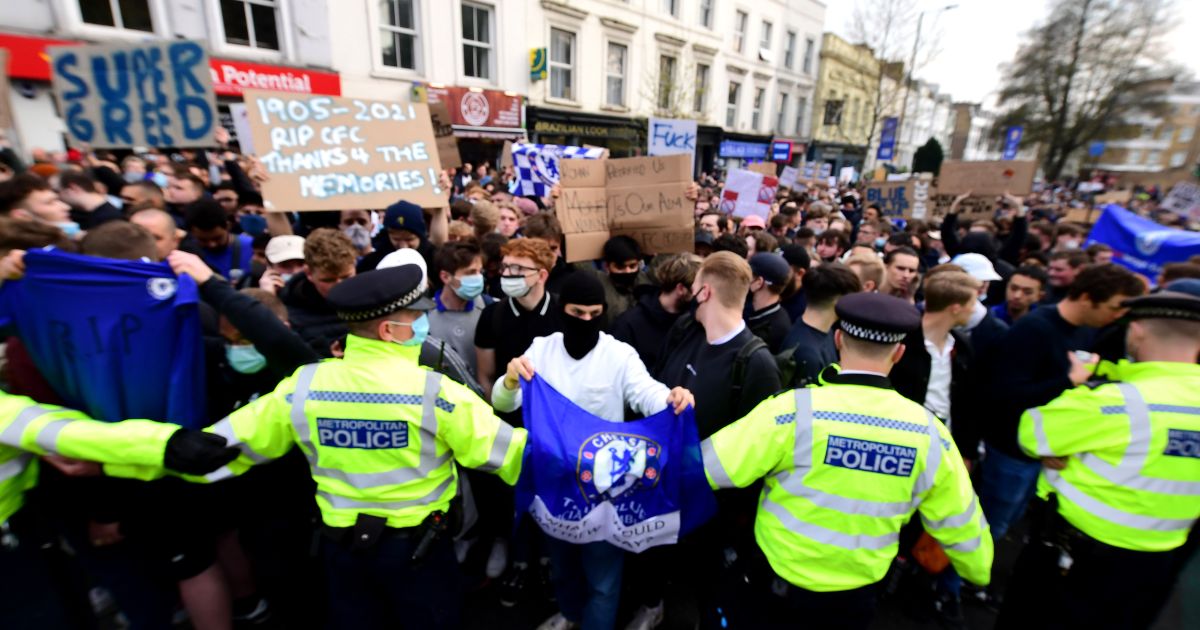 Manchester City have withdrawn from the European Super League with Chelsea organising the paperwork to follow suit, according to reports.

There have been Blues fans protesting outside the ground over the last few hours ahead of their clash with Brighton and it now looks like Chelsea will take steps to remove itself from the proposed competition.

BBC Sport understands that ‘Chelsea are preparing documentation to request withdrawing from the European Super League.’

When we all screamed “f*** off”, the Super League crumbled

Martin Lipton of The Sun, meanwhile, confirmed City have withdrawn, he wrote: “Manchester City pulling out of Super League. City have told organisers they no longer want to be part of the £4.6billion scheme.

“City are the first team to pull out. It is understood Chelsea are preparing documentation to do the same.”

City are the first team to pull out. It is understood Chelsea are preparing documentation to do the same #ballstothesuperleague

Man City confirmed via their official website on Tuesday night that they have “formally enacted” their withdrawal from the competition.

UEFA President Aleksander Ceferin has reacted to the news and he said that it takes “courage” to admit to a mistake as City have:

“I am delighted to welcome City back to the European football family. They have shown great intelligence in listening to the many voices – most notably their fans – that have spelled out the vital benefits that the current system has for the whole of European football.

“As I said at the Uefa Congress, it takes courage to admit a mistake but I have never doubted that they had the ability and common sense to make that decision.

“City are a real asset for the game and I am delighted to be working with them for a better future for the European game.”

Reacting to the news of Chelsea’s withdrawal, Pat Nevin told BBC Radio Five Live: “I don’t think Chelsea were ever massively on board, and to be honest I didn’t really see a short-term benefit for them doing it.

“The sides have shown a semi-united wall so far but the minute one brick crumbles then the whole wall could fall. I’m not convinced by it at all.”

“I honestly think that the clubs weren’t prepared for anything. This sounds like an utter desperate panic from a number of clubs that have dived into something that seven days they weren’t interested in because they were talking to Uefa and now they’ve got this all-signing and all-dancing thing.”

Daily Telegraph journalist Jason Burt back up the BBC‘s report and added: “Told Roman Abramovich was never comfortable with the Super League idea.”

The moves comes after the 14 other Premier League clubs released a statement on Tuesday condemning the plans.

The statement read: “The Premier League, alongside The FA, met with clubs today to discuss the immediate implications of the Super League proposal.

“The 14 clubs at the meeting unanimously and vigorously rejected the plans for the competition.

“The Premier League is considering all actions available to prevent it from progressing, as well as holding those Shareholders involved to account under its rules.

“The League will continue to work with key stakeholders including fan groups, Government, UEFA, The FA, EFL, PFA and LMA to protect the best interests of the game and call on those clubs involved in the proposed competition to cease their involvement immediately.

“The Premier League would like to thank fans and all stakeholders for the support they have shown this week on this significant issue.

“The reaction proves just how much our open pyramid and football community means to people.”

He wrote on Twitter: “It’s not just the English teams rapidly pulling out… senior sources at Atletico Madrid tell me they are OUT, too.”

It’s not just the English teams rapidly pulling out… senior sources at Atletico Madrid tell me they are OUT, too.

And Barcelona now look to be gone too as Lipton provided a further update on the clubs who intend to withdraw from the competition.

Man City, Chelsea, now Barcelona all out. Pull down the shutters, it’s over #BallsToTheSuperLeague