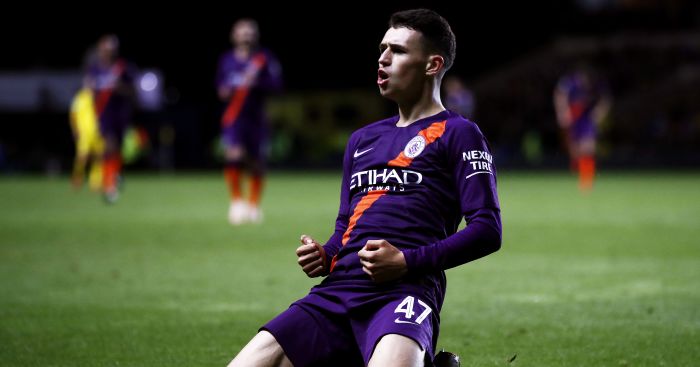 Manchester City’s Phil Foden hailed Andres Iniesta as being “on a different planet” after further comparisons between the pair.

The England Under-19 international starred in City’s 3-0 Carabao Cup third-round win over Oxford on Tuesday night, playing his part in the opening two goals before adding a late strike of his own.

It was Foden‘s maiden senior goal and capped a fine display on what was his first start since the Community Shield.

While City boss Pep Guardiola played down the likeness, Foden has long been hailed as the ‘Stockport Iniesta’ by fans of the club.

The 18-year-old insists he pleased to have been given the nickname but has a way to go to match the World Cup winner, backing Guardiola to develop him in the best way.

Asked about the ‘Stockport Iniesta’ moniker, Foden replied: “I’m happy with that but come on – Iniesta is on a different planet!

“For them to call me that is massive, it means a lot. I’ll just keep getting these cup games and run-outs whenever I can and hopefully I can start a lot more games one day.

“There’s no need to rush. Pep knows what he’s doing and I’ll play at the right time. He’s good at bringing youth players through, he’s done it in his career before so just be patient, I’m still young and I’m still learning.”

Foden, who came off the bench in the latter stages of City’s Carabao Cup final victory over Arsenal last season, lauded his team-mates and assistant coach Mikel Arteta as influential in his improvement.

“Training with the likes of David (Silva) and Kevin (De Bruyne) and seeing what they do every day has brought me on as a player.

“Working with Pep as well has been a really big part of my game. Both him and Mikel have been a massive help. I just have to keep impressing and keep working hard and see where it gets me.”

Talking about his first City goal, which he celebrated with vigour in front of the travelling support at the Kassam Stadium, Foden admitted it was a special feeling.

“It’s an unbelievable feeling to get my first goal for City. It meant a lot to me and I still get the enjoyment assisting and scoring. I like to do both and get both in my game.

“There’s a lot of things still to improve so I’m just going to keep my head down working to improve things like not giving as many balls away.

“That comes when you play. You need to grow and be mature and I’ll get that as I play more games.”

Ten facts about Serena Williams on her birthday, featuring Mmmbop and a scene with Peter Dinklage (Tennis365)

Coaches need to remember: Cricket is a captain’s game (Cricket365)