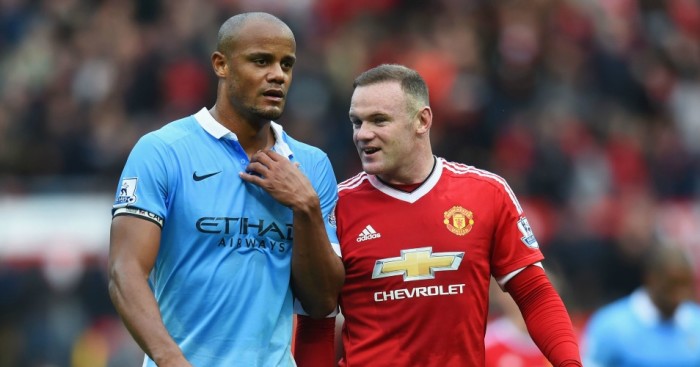 Manchester United and Manchester City played out a 0-0 draw at Old Trafford during which neither team played with any attacking invention.

United and City had the chance to make a real statement about their title chances by registering a big win, but neither was up to the challenge and the two teams played out just the third goalless draw between them in Premier League history.

Wilfried Bony was unable to fill the considerable void left by Sergio Aguero’s absence while Yaya Toure had a day to forget playing in the number 10 role where the injured David Silva usually causes so much damage.

United fared no better. It was only in the last 10 minutes that they started to turn the screw on their rivals.

Wayne Rooney failed to mark his first match as a thirtysomething with a goal. The United captain, who needed his head stapling together after a clash of heads with Vincent Kompany, was anonymous throughout.

Jesse Lingard rattled the bar and Joe Hart saved from Chris Smalling at the death, but otherwise the hosts did not trouble the City goalkeeper.

A wall of noise hit the players as they emerged from the tunnel and both sets of fans traded insults from opposite ends of the packed stadium.

The atmosphere soon dampened down, however, as a dull first half ensued.

Rooney did his best to ignite proceedings, hurtling at the away defence. Toure was lucky to escape a booking after taking down the United skipper near the halfway line.

Juan Mata appealed for a penalty after the ball brushed Fernandinho’s arm, but Mark Clattenburg waved play on.

The Brazilian entered the book for a clumsy challenge on Anthony Martial, who was United’s only threat in the opening half.

The Frenchman won a free-kick after bamboozling Bacary Sagna, but United wasted it.

While Antonio Valencia was down having treatment for a knock, Rooney sprinted to the touchline with blood gushing from the top of his head following a clash with Kompany. United’s medical staff stapled the wound together so he could carry on.

Marcos Rojo was doing an excellent job keeping Kevin De Bruyne quiet and Raheem Sterling was not in the game.

Sterling paid the price for his poor showing. Jesus Navas came on for the winger just after the break.

Lingard and Marouane Fellaini came on for United while City substituted a disappointed Toure for Martin Demichelis.

Nothing changed on the pitch, however. Neither team looked like breaking the deadlock.

There was a moment of panic in the away defence when Mata broke through, but Hart rushed off his line to deny the Spaniard.

Lingard thought he had won the game with his first United goal five minutes from time. Martial took the ball off Navas and chipped a delightful ball into the box. The Warrington winger lifted the ball over Hart, but the ball struck the bar and bounced out to safety.

The England goalkeeper then denied Smalling with a fine save down to his left with two minutes to go.