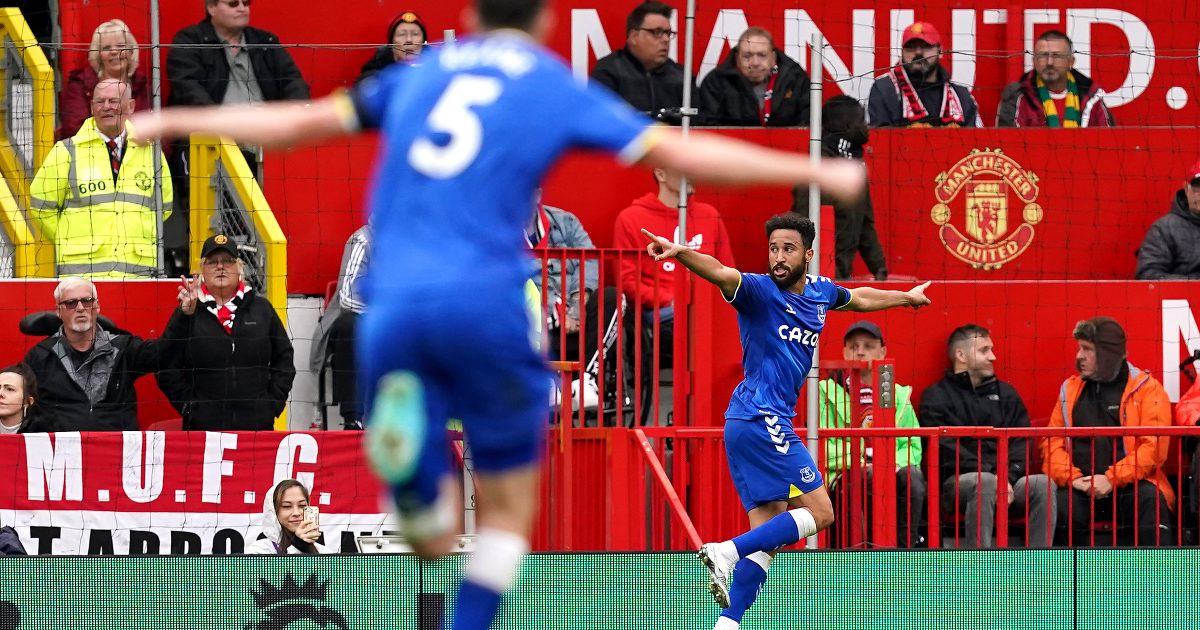 The Red Devils looked to build momentum against Everton as they headed into this game on the back of their win against Villarreal in midweek.

They were on course for victory as Anthony Martial fired them ahead but Townsend equalised for Everton in the second half.

Cristiano Ronaldo was surprisingly named on the bench on Saturday lunchtime, with the United boss plumping for five changes having been made to sweat in the Champions League on Wednesday.

Solskjaer bemoaned the Saturday lunchtime scheduling of this Premier League fixture but his side pulled ahead as Martial scored his first club goal since February. The forward’s relief was palpable.

It was a well-constructed goal cancelled out by a fine Everton break involving Demarai Gray, Abdoulaye Doucoure and Townsend, who replicated Ronaldo’s celebration after firing past David De Gea.

Everton thought they had snatched victory late on, only for Yerry Mina’s goal to be rightly ruled out by the video assistant referee for offside.

It was a poor end to a match that United had begun brightly, with Martial wasting a great early chance when heading a fine Aaron Wan-Bissaka cross off target.

But Everton settled after an uncomfortable start and Michael Keane met Townsend’s free-kick from the right with a glancing header just wide.

It was an even, entertaining encounter and Jordan Pickford prevented the hosts pulling ahead in the 21st minute after Edinson Cavani met a Fred cross with a firm downward header.

Mason Greenwood was looking lively and saw a long-range drive comfortably stopped, but Everton were having chances of their own.

Wan-Bissaka blocked a Doucoure strike when the visitors next countered, but United wrested back control as half-time approached and took the lead through a quality move.

McTominay showed impressive awareness to play into Greenwood, who swept over for Bruno Fernandes to kill the ball and play onto an overlapping Martial.

The France attacker opened up his body and fired a right-footed strike past Pickford, with his name sung from that point up until half-time.

Greenwood saw a shot from distance held by Pickford in a comparatively quiet start to the second period, with Solskjaer turning to substitutes Ronaldo and Jadon Sancho in the 57th minute.

The duo added renewed intensity to United’s attack but Everton had been a threat on the break all day and caught United from their own corner in the 65th minute.

Fred was all too easily outmuscled by Gray and played into Doucoure, who followed good footwork with a pass out to Townsend.

The winger hit a low right-footed drive past statuesque De Gea and brought out the Ronaldo celebration in front of the visiting support.

Paul Pogba replaced Fred shortly after the equaliser as United looked to pull back ahead.

Sancho and Ronaldo linked up before the latter flashed across the face of goal, with Pogba swinging a curling 20-yard effort wide as the match entered the closing stages.

Pogba headed wide from a corner, only for Everton to celebrate a goal from one at the other end in the 85th minute.

United cleared the initial set piece but Ben Godfrey coolly put Tom Davies behind the backline, directing across for Mina to tap home.

The towering defender ran off to the corner, where his celebratory dance was made to look a little foolish as the video assistant referee rule out the goal for offside.

Sancho mishit a late effort from a Ronaldo flick as the match ended level.