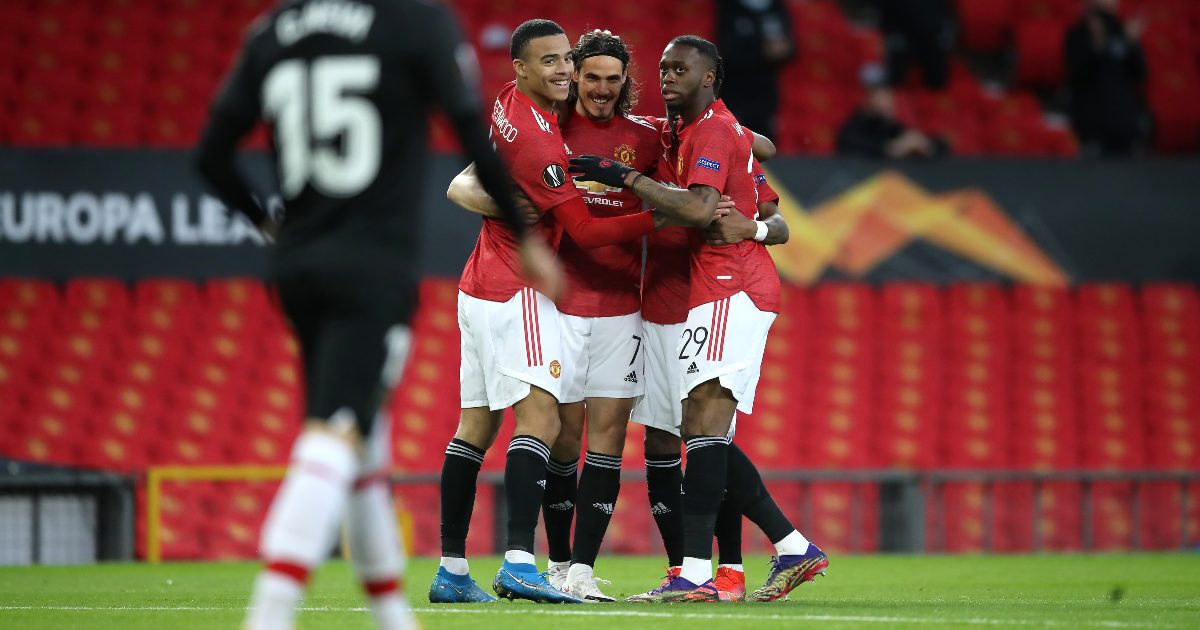 Man United duo Edinson Cavani and Paul Pogba combined to extend their advantage as they ease past Granada.

United extinguished any hope of a remarkable Granada turnaround when veteran Cavani volleyed home in the sixth minute, with Jesus Vallejo’s late own goal wrapping up a 2-0 win on the night, 4-0 on aggregate.

The reward is a mouth-watering semi-final clash against Roma and a reunion with Chris Smalling and Henrikh Mkhitaryan – starters when United won the Europa League in 2017.

That was the Old Trafford giants’ last trophy and they never looked in danger of being denied a fifth semi-final in two seasons after Cavani volleyed home a smart flick on by Paul Pogba.

The France midfielder captained the side in the absence of Harry Maguire – one of three suspended players – and was withdrawn at the end of a first half in which Granada called for him to receive a second booking.

United continued in the ascendancy after the break and ex-Wolves defender Vallejo turned into his own goal under pressure from substitute Juan Mata at the death as Granada’s remarkable first continental campaign came to an end.

Coach Diego Martinez had spoken on the eve of the game about his belief that the Andalusians could seal a historic Old Trafford triumph, but the “perfect game” required was soon beyond them.

Alex Telles, in for the suspended Luke Shaw, sent over a cross from the left that Pogba smartly headed back towards the penalty spot area, where Cavani expertly steered a left-footed volley into the far corner.

The classy sixth-minute strike all but ended Granada’s faint hopes of progress, yet it did not dent their competitive endeavour.

Yangel Herrera, on loan from Manchester City, headed wide as the LaLiga side looked to hit back immediately, before turning their attention to getting Pogba sent off.

The stand-in skipper showed impressive skill and strength to hold off the visitors when driving forwards, only to inadvertently catch German in the face and earn a 17th-minute booking.

Within minutes former Tottenham striker Roberto Soldado joined him in referee Istvan Kovacs’ notebook as he screamed for Pogba to be handed a second yellow card for a challenge on Herrera.

Pogba got away with that clumsy tackle, both in terms of staying on the field and seeing Herrera head the resulting free-kick wide, but still spoke to the referee during a break in play about the initial yellow card decision.

The Portuguese mishit his next attempt well wide and other half-chances came to nothing before the break, with Donny Van De Beek replacing the booked Pogba when the teams returned.

Mason Greenwood headed straight at Rui Silva after Jorge Molina was denied by David De Gea at the other end, with United still on top as Cavani glanced a header wide before Van De Beek struck just off target.

Cavani was withdrawn in the 60th minute with half an eye on Sunday’s clash with Burnley – perhaps adding to a sense of complacency that De Gea snapped his team-mates out of after German was allowed to fire wide.

United’s changes took the sting out of the game as Solskjaer’s side trundled along in second gear, with De Gea stopping Victor Diaz’s stinging effort and a close-range Herrera attempt.

But this was as comfortable as a European quarter-final could be and Vallejo turned Telles’ cross into his own net as Mata challenged in the 90th minute.