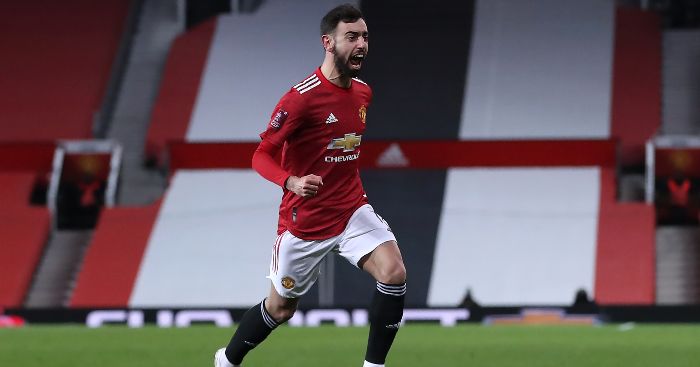 Bruno Fernandes came off the bench to score a stunning free-kick to help Man United to victory over Liverpool in a five-goal thriller.

Mohamed Salah’s fine opener was cancelled out by Mason Greenwood in an entertaining first half which was followed by a similar pulsating second period on Sunday.

Marcus Rashford coolly put United ahead only for Salah to level with his second of the match, setting up a grandstand finish in which star man Fernandes came off the bench to score a super free-kick winner.

Oh how 𝙨𝙬𝙚𝙚𝙩 does this one feel? 😍

A home clash against West Ham is the reward for the Red Devils, who Solskjaer led to victory against Liverpool at the fifth time of asking – 22 years to the day after scoring the winner against them at the same stage of the competition.

Defeat made this the fifth time in six seasons that the Reds had failed to progress beyond the fourth round of the FA Cup under Klopp, whose poor start to 2021 continued as they lost on enemy territory.