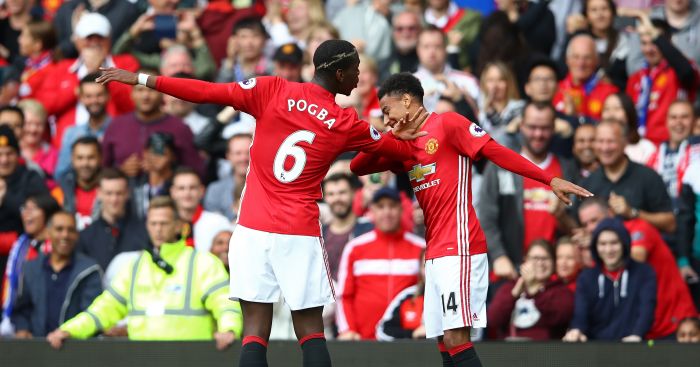 Manchester United produced a first-half display as entertaining as it was dominant to swat aside reigning champions Leicester, with Jose Mourinho’s decision to drop Wayne Rooney paying off.

An exceptional start to the campaign was followed by a stark drop-off after the international break, leading criticism and scrutiny to mount on United’s manager, captain and overall set-up.

Mourinho pledged to “fight hard” in spiky programme notes and that showed as United ended a disappointing Premier League run by thrashing Leicester 4-1 thanks to a rampant first-half performance.

The big news before the match was that Rooney had been dropped to the bench, but the captain’s absence appeared to help rather than hinder the Red Devils as Chris Smalling’s header midway through the first half was followed by some exceptional football.

It was the first time since February 2001 that United had gone in at half-time of a Premier League match boasting a four-goal cushion, so they were always likely to struggle to match that display in the second half.

United had got back to winning ways on Wednesday with a timely, if at times unconvincing, EFL Cup win at Northampton and Mourinho made eight changes to that side – most notably dropping skipper Rooney to the bench.

The sweeping changes led to a disjointed start, with the hosts dominating possession without creating clear-cut opportunities.

Blind, playing left-back with Luke Shaw injured, sent in a fine corner that Smalling met with a header too powerful for former Red Devils youth-team goalkeeper Ron-Robert Zieler to claw out.

The opener appeared to remove the shackles as the home side grew in confidence and attacked with panache.

A lovely ball from Zlatan Ibrahimovic found Rashford as United broke at pace, but the 18-year-old hit uncharacteristically wide – not that it knocked his confidence as he attempted an overhead kick soon after.

Pogba was comfortably producing his finest United performance and sent a clipped ball into the box, where Ibrahimovic controlled superbly and hit a fizzing strike over – a move that brought a standing ovation, if not a goal.

Zieler had to scramble across to prevent an exceptional 30-yard strike from Pogba going into the top corner, but the champions’ goal was now under siege and United netted three goals in five minutes towards the end of the opening period.

Mata doubled the hosts’ lead by starting a move that went through Pogba and Jesse Lingard before he fired home, then collected a clever Blind corner and directed into the six-yard box for Rashford to score.

Three minutes before the break United racked up their fourth. Blind provided yet another fine corner and Pogba rose to impressively send a header past Zieler.

Few expected Mourinho’s side to maintain that intensity after the break and so it proved, with Andy King and Gray’s half-time introductions helping settle the Foxes down.

The latter left all inside Old Trafford open-mouthed in the 59th minute, taking aim from distance and beating De Gea with a stunning strike.

King had a chance to reduce the deficit further after Ibrahimovic had a low strike tipped around the post, while Antonio Valencia flashing a cross-shot across the face of goal.

De Gea had to be alert to thwart Gray when attempting to net another stunner at a time when Claudio Ranieri’s men were occasionally opening up United’s defence.

Rooney was introduced with seven minutes remaining but there was to be no more goals, try as Ibrahimovic, in particular, might.